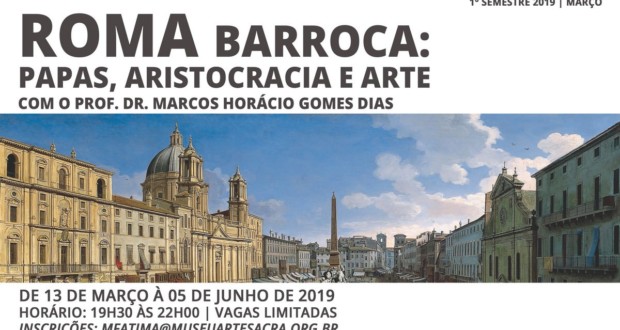 From Rome, Baroque expanded rapidly to other parts of Europe. foreign artists took this influence to their regions of origin, such as the Netherlands, Holland, Southern Germany, Áustria, Spain, Portugal and the American colonies. However, each region developed different versions of this art, depending on the particularities of their internal political conditions, religious and economic. The purpose of this course is to understand the ways in which Baroque art developed in Rome and how they sewed two types of patronage: the papacy and the aristocratic families of the city. Knowing how important the urban space as a stage and power scenario, seeks to understand how the papacy and disputes between the major families managed to reinvent the city, in the 17th century, from its classical tradition and through art in the streets, squares, churches, temples, palaces and other buildings. Examination of Baroque art in Rome leads us to reflect on a political and religious ideal, maintained and understood by high church, but also leads us to an imaginary about the power built by large families, sponsorship and precisely understood by the art that consumed. The course think, especially, how art established there was a model for other western nations.

• To present the art and culture as reflective material;
• Analyze, criticize and contextualize the baroque art in Rome by means of patronage and collecting. Baroque art in the streets, squares, churches, temples, palaces and other buildings.
• Display the art as an interdisciplinary field of knowledge: Literature, History, Philosophy, Sociology, Anthropology, Psychology, Theology etc.;
• Choose specific themes for various research work and stimulate production projects where the use of Baroque art is present.

Day 13 March 2019
CLASS 1 – Rome and the Ancient Monuments
The ruins of the Roman Empire, the Forum, the Palatine and the Colosseum region were seen as monuments celebrating the very triumph of Christianity. What is known today as the archaeological area of ​​the city, It was merged into the new urban space of baroque features and shared with him the same importance.

Day 20 March 2019
CLASS 2 – The mechanisms of patronage in the seventeenth century
The Protestant Reformation and the reaction of the Church of Rome. The contemporary need made popes, religious orders and lay brothers associations would take the front of constructive and artistic actions. They themselves took care of orders and execution of projects.

Day 27 March 2019
CLASS 3 – The Papacy and his court.
Popes Urban VIII, Innocent X, e Alexandre VII. The power of the Pope, absolute or limited, account with the aid of cardinals, bishops, abades, missionaries, nuns, nuns, parents and deacons. We have an institutional body of representatives of God, so headed by Pope, in Rome. These men are seen as heirs of the first apostles called by Jesus Christ and have the function to take their word for all places and regions. Rome is the headquarters of this religious court.

Day 03 April 2019
CLASS 4 – Rome and the sacred space: the reconstruction of a city
Rome, as a city and urban space, It is understood as a place of reference and model for the Christian and Catholic. Its urban space is treated rhetorically and as one of the possible ways of exposure of political discourse and religious.

Day 10 April 2019
CLASS 5 – Gian Lorenzo Bernini and Francesco Borromini.
The work of the two greatest architects of the Baroque world was to a great new contribution to the prospects of streets and city squares, embellished with precious sources, palaces, vilas, parks and other important buildings.

Day 17 April 2019
CLASS 6 – Religious Orders
The transformation of the city just did not fit the Holy See, but, also it was up to the religious orders, convents and brotherhoods erection of important churches agregasem rich and traditional families, the pilgrims and the people in general.

Day 08 May 2019
CLASS 8 – The Private Sponsors
Roman traditional families, from where they left many members of the clergy, also they understood art as a form of political and social distinction. The interiors of palaces and villas were the only ones to compete with the decoration of churches. The Farnese family, Corsini, Barberini, Borguese Pamphili and fought the best painters and sculptors of the time.

Day 15 May 2019
CLASS 9 – Little Court of Queen Christina of Sweden
She is the daughter of an advocate of Protestantism in the Thirty Years War, Cristina caused scandal to abdicate in 1654 and convert to Catholicism. She spent her remaining years in Rome, becoming the leader of the musical life and local theater. A queen without a country, she protected many artists and projects. Cristina died in 1689 and it is one of the few women buried at the Vatican.

Day 22 May 2019
CLASS 10 – The General Public
The art that caters to high-income citizens; wealthy merchants and civil servants; medium traders and farmers, foreign communities in Rome and people of humble origin.

Day 29 May 2019
CLASS 11 – Rome and the dispersion of its influence
Artists from all over Europe came to Rome to catch up on the latest arts news and kings sent embassies to send illustrations, paintings and sculptures to their countries of origin.

The content provides support for scholars of art, historians, professionals linked to literature and media, religious, researchers, teachers wishing to develop the theme in the classroom, professionals in all areas, College students and those interested in General.

Marcos Horácio Gomes Days doctor in Social History from PUC-SP; Master in Social History at USP; a graduate degree in art and Baroque Culture by the Institute of philosophy, Art and culture of the Universidade Federal de Ouro Preto (UFOP) and a Bachelor's degree in social sciences from USP. Has experience in the field of history and sociology, with emphasis in History, acting on the following subjects: Art History; History of Baroque and Rococo; Art and culture in Minas Gerais; Neoclassical, Empire and the 19th century in Brazil; Culture theory; Historical Heritage; History of image Production; Communication theory and socio-economic Reality and Brazilian politics.