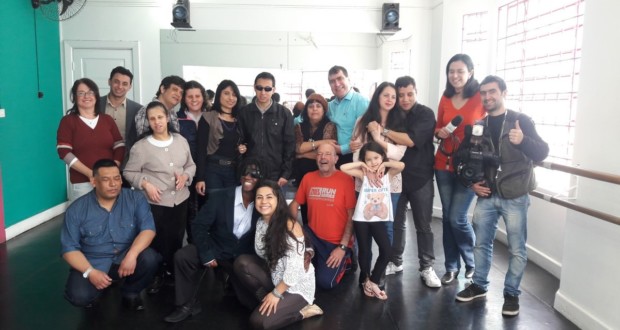 Spectacle "The cry of the dance" in the theatre the Centre Jacques Cleon Creativity of Curitiba. Photo: Disclosure.

The Teatro Cleon Jacques from the center of Creativity of Curitiba presents this Friday (15/12) the show "the cry of the dance", produced by a group of people with visual impairment who participates in the project "Dance without seeing". In addition to the participants of the project, invited other groups, resulting in a diverse show, with several dance rhythms, as hip hop, Forró, pop and samba.

The idea, According to one of the organizers, the Physical education teacher Jacob Cachinga, is celebrating the differences, contributing to an awareness of the inclusion. "Whatever the difference or deficiency, We are all human beings. Are our differences that make the world better ", says Jacob. The show also celebrates the national day of the person with Visual impairment (13 of december).

The project Dance without seeing began about two years ago, with a partnership formed by dancer Pamela Shiroma, professor Jacob Cachinga and the dance school Concept, where are the ballroom dance classes for couples of people with visual impairment. The methodology involves three stimuli: oral, where teachers describe each step for students; sound, that allows students to learn, through music, identify the rhythm and dance in the musical compass; and tactile stimulation, in which teachers with the touch technique optimizes each couple.