Gaps in the history of contemporary Brazilian art, not understood as a period itself, but perhaps and most likely as the beginning of an era marked by reflections. And not just a surface reflection, but a profound questioning of contemporary own in search of the noble goal of a new reality.

Their endless searches for languages, techniques and styles that establish the role of painting and the artist in contemporary, causing the dissolution of boundaries between subject and object. Deepening, including knowledge concerning the historical aspects of information, reigning what is unrepresentable. Providing basis for critical reflections of artistic practice. The group's proposal, besides presenting their most compelling work and looking determined, is holding discussions on this issue, throughout the sample period.

Formed by a group of artists irreverent and restless, that driven by passion for art, decide to participate in an exhibition, cujo questiona title as lacunas contemporâneo do, and the artistic stridently own. If now the gap is vast and endless what will be then a suitable topic for a post currently suggestive? On the agenda, the celebration of ridicule, sense of humor with elegance, vulgarities of human nature, gleaming shine, painting furiously, digital art, draw music, objects that dissolve in the light and the ephemeral …

From 4 to 17 August, às 20hs, no Piola Jardins, in São Paulo. Each artist presents this date, their greatest concerns, in the form of works of art, according to the theme: “The gaps in the Contemporary Brazilian Art History”. 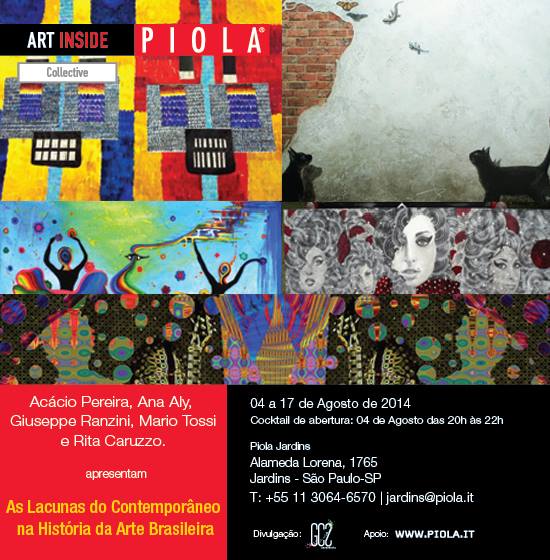 Check the address on the map:

Open every day - Hours of Operation: Sunday to Thursday, from 18h to 1h - Fridays and Saturdays, das 18h às 2hs.

Previous: The Art of working with Art, a Course of Visual Arts for Visual Artists by Ana Goldberger
Next: Exhibition “The Blue Sea is for Everyone”, Grace arnus by Sergio Wolf Rock