Home / Art / “Here or there?” The enchantment and the learnings of storytelling 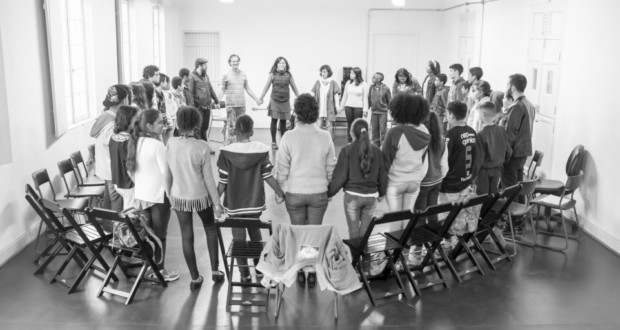 “Here or there?” The enchantment and the learnings of storytelling

Soiree in the House of culture of Chennai, in 10 of december, brings together young
to tell stories-dilemma after four months of training

On 10 of december, 30 teenagers will be on the scene to show things that have prepared hard over four months. After course of storytelling with the actors Cristiana Ceschi and Paulo Federal, girls and boys will make a Soiree of storytelling, both traditional as the newly established along school. The stories have in common? Do not address a single theme or are all about the same characters: stories-dilemma, taking place until you reach an impasse, a difficult situation to solve, you have several possible solutions, all of them involving losses and gains.

The show was produced by young people and educators, Since the screenplay of stories that will be told to the props and costumes, scenery and lighting. The event is the most visible result of the project "Here or There? – Choices and dates ", produced by Aymberê Productions with the sponsorship of the Comet, through the proactive business ICMS, promotion of culture program of the Government of the State of São Paulo. Participants are pre-teens and teens 11 to 16 years studying in schools REFER General Paulo Carneiro Tan Alves, REFER Cel Ary Garcia and REFER Ducker, located in the Vila Maria Park, The northern zone of São Paulo.

"The traditional stories bring situations and archetypal characters, speaking of all of us ", explains Cristiana Ceschi. "When we chose to work the stories-dilemma, the idea was to propose situations in which there is no single right way and that, to decide how the story will follow, We have to question our values. This kind of story makes a lot of sense, because it is very present in the lives of these girls and boys ", complete. For example: a woman, your mother and your mate, all three blind, walk together down a road when, magically, are eyes that allow them to view; but, no eyes for all, then you need to decide: There's something about the eyes? There are many criteria that can be mobilised, and in any case there will be 100% of benefit to all, but there's no way to not make the decision.

Throughout the course, young people worked body, voice, gesture and expression. However, more than all that, the main feature that they had to develop was the willingness to hear – not to judge – the others. "One of the main things we have been working is silence, the ability to listen to others, to welcome the stories are of another person ", evaluates Paulo Federal. In a world where we are caused (and almost forced) the opine about all, giving like in time and make the comment "right" immediately (and if it's not the "right" we are massacred by a flood of judgment) It is very difficult to get answers less and more automatic copyright of each. "More than techniques, We worked the ability to not judge others and themselves, so that each can be fully present and accept each as is ", completed Paul.

"Here or There" is part of a continuing educational and artistic action developed by the JCA Institute – linked to the group which is part the Comet – in partnership with the Aymberê. The program involves projects especially designed to the Vila Maria Park, neighborhood where the company is located more than 65 years and helped build, In addition to supporting other artistic cultural projects.

In 2016, the project "paths of art", an exhibition of the photographer Daniel Kfouri what happened inside the school General Paulo Carneiro Tan Alves, that involved, in parallel, intense training process in photography and art appreciation with students and teachers of the school. At the end, was presented an exhibition with the pictures of the students in the House of culture of Chennai.

As wrote Tatiana Antunes, President of IJCA, a trademark of the Institute "is to get work from the will and potential in the territory, and create projects that awaken and stimulate new relations between people, the company and the partners, to local development in the broader sense and sustainable ". This guideline is based on the understanding that "art should not have a place of restricted movement" and that the Vila Maria Park can be seen, also, as a manufacturing center of your culture and your art, In addition to consumer of other cultures and arts.

*The Soiree will feature translated into pounds.

Actress formed by the College Bayside – Australia, art-educator, Master of teaching and learning of art from ECA-USP, social scientist (FFLCH-USP) and Narrator of stories. He worked with the British-German collective Gob Squad in multimedia performances Super Night Shot, Now Fly and Revolution Now!

On Awakening Art Association, developing work of storytelling in two hospitals specializing in Cancer-ICESP and GRAAC – and produced a storytelling course for health professionals entered the hospital humanization programme. In 2013 debuted as Director in children's play “Even the princesses Release Pum” inspired by the work of Ilan Brenman, of CLA Toc Toc Can enter?. Currently integrates the collective The Rutes; works with the Group Standing of wonder and part of the team of organization of the Mouth of heaven – international meeting of storytellers.

Actor, clown and art educator, practice areas since 1986. He is a professor degree in teaching, always taught in school and culture centers in addition to your work as an actor. In 1991 integrates the three The Charles & CIA starting your research on the language of the clown. Creator of Cia Megamini and spectacle Playing in Yard. Uses if the narrative as much in the classroom as on the stage. Founder of the Flying Bikes and Beloved Forces groups and is artistic curator at CASA360graus.

ABOUT THE AYMBERE ARTISTIC PRODUCTIONS

Degree in Public Relations from USP SP, graduate in business administration for the third sector and Cultural Management, Patricia Souza Ceschi works with cultural production for more than 15 years. In 2010, along with the artist Breno Menezes, founded the Aymberê Produções Artísticas Ltda, where next for dedicated to the production and creation of national and international artwork in various languages. More information on www.aymbere.com.br or by the facebook.