Afonso Tostes launches the first book about his work, in the Mul.ti.plo Gallery.

Between the city and nature reviews the artist's trajectory based on images of his work and reports on the work process, from the beginning of its production to the present day.

Launch takes place on the day 3 de Mayo, at 18h, in the midst of exposure The things that still exist, where he presents unpublished works in charcoal.

In the midst of his exhibition at Mul.ti.plo Espaço Arte, Leblon, Afonso Tostes launches the first book about your artistic career. Edited by Cobogó, Between the city and nature reviews the artist's trajectory based on images of his works and accounts of his work process, from the beginning of its production to the present day. The launch takes place on the day 3 de Mayo (Tuesday), at 18h. In shows The things that still exist, Tostes presents 16 unpublished works, including charcoal carved pieces. The exhibition opened on the day 10 from March to 6 de Mayo, with free admission.

still a boy, Afonso Tostes took a liking to travel, transiting between Belo Horizonte, where was born, and farms in the interior of Minas Gerais. There, contemplating gates and trees, corrals and horses, developed a taste for investigating nature and its relationship with man, something that is a mark of your artistic trajectory. Your artistic production, started at the end of the years 1980, is collected for the first time in a book, Afonso Tostes: Between the city and nature, that Editora Cobogó launches in 2020.

The texts of curator Daniel Rangel, publication organizer, sew the artistic production of Tostes, from the paintings of the years 1990 to the sculptures, to which the artist starts to dedicate himself mostly from the years 2000, to the work processes and the research trips that lead to the elaboration of the works.

Afonso Tostes: Between the city and nature accompanies the artist's movements in texts that do not follow the tone of critical analysis of works of art. As stated by the book's organizer, the proposal was “to create a kind of travel notebook, a great poetic profile of the artist with large doses of images from his sculptural production”. 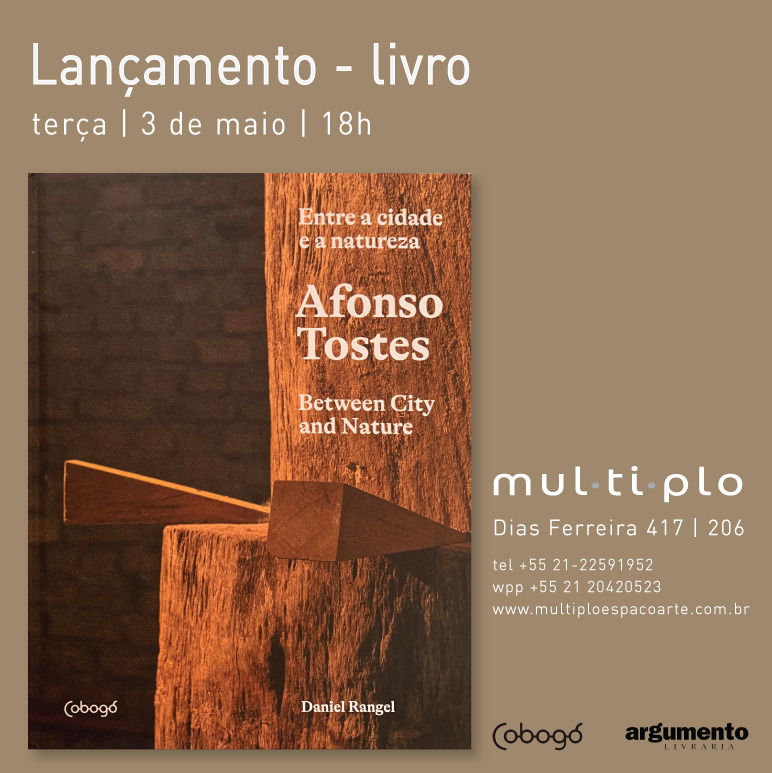 Book “Afonso Tostes: Between the city and nature”, invitation. Disclosure.

The publication is divided into four chapters: Paths, human city; a central segment with two essays on the artistic work of Tostes; and Human nature. Paths gives an account of the influences and the first movements of the artist – born in 1965, he leaves Belo Horizonte in 1987, where he studies at Guignard School, heading to Rio de Janeiro, where he remained until 2016, when he moved to São Paulo. With atelier in Bom Retiro, neighborhood in the central region of the capital of São Paulo, the artist feeds “from the streets of commerce, of popular articles, of passers-by and the vibration of the surroundings”, how do you write daniel rangel. And complete: “Escapes are still essential for creating: Tostes is an artist-traveler-explorer, who exchanges and exchanges things and knowledge; it integrates, incorporate and reciprocate. Its production is formalized, and, by practice in the studio, where he lives and interacts with what he has collected”. Works in oil on paper and canvas are recurrent in this early career – “Tostes é, especially, a designer. All his work is structured by drawing. a technical drawing, almost naturalistic with a firm and fast stroke”, writes Rangel.

not second chapter, human city, delve into his sculptural production. It's from a renovation in his studio, that had been occupied with tools that were not the artist's, that Tostes aroused the desire to carve. One of the props used to support the slab during the works, for example, would become the seminal object of his process. From this period are famous series such as struts, where wooden structures seem to hold up walls (exhibited in museums, galleries and at the Mercosul Biennial in 2005). Following, Tostes turns to series production Tools, hoes, sickles and axes, among others, with the carved handles, relating time and the diverse meanings of materials.

The central segment of the book features two essays that observe Tostes' work from different perspectives., a “textual interlude”, as defined by Daniel Rangel. The first, by Paulo Herkenhoff, Afonso Tostes: Small connotative glossary out of alphabetical order, brings together chapter entries that, the principle, dealt with the exposure Trunk, held at Casa França Brasil, in 2013. Revised and completed for the book in 2019, Herkenhoff's text addresses Tostes' work in entries such as cold weather, Drop, Carpentry. There is still the test Afonso Tostes: artisan of life, signed by babalorisha Adailton Moreira Costa, from the terreiro Ilê Omiojuarô, where Tostes started in Candomblé. The report unites knowledge about the orixás and the relationship with the artist, “son of Obaluaê, Aparodé de Ochosi”, how does the author write. For him, “Tostes' eyes think and send messages, and we often need to be free to understand this open exunian communication”.

The last chapter, titled Human nature, is an immersion in the last decade of production of Tostes, when the artist-traveling characteristic becomes more marked, your excursions into nature and a return to your roots. In this chapter are works such as thud, installation that composed the first exhibition of Tostes at MAM in Rio de Janeiro in 2011, and the warehouse found in ruins on a cousin's farm in the interior of Minas Gerais and rebuilt at Casa França Brasil in 2013, or the series of oars, mid- 2019. In the final texts of the book, Rangel reports the connections between the works and the displacements in the artist's life: “Afonso Tostes, that one day he left the mountains to the sea and from there went back up the river, returned to the forest from which he started.” 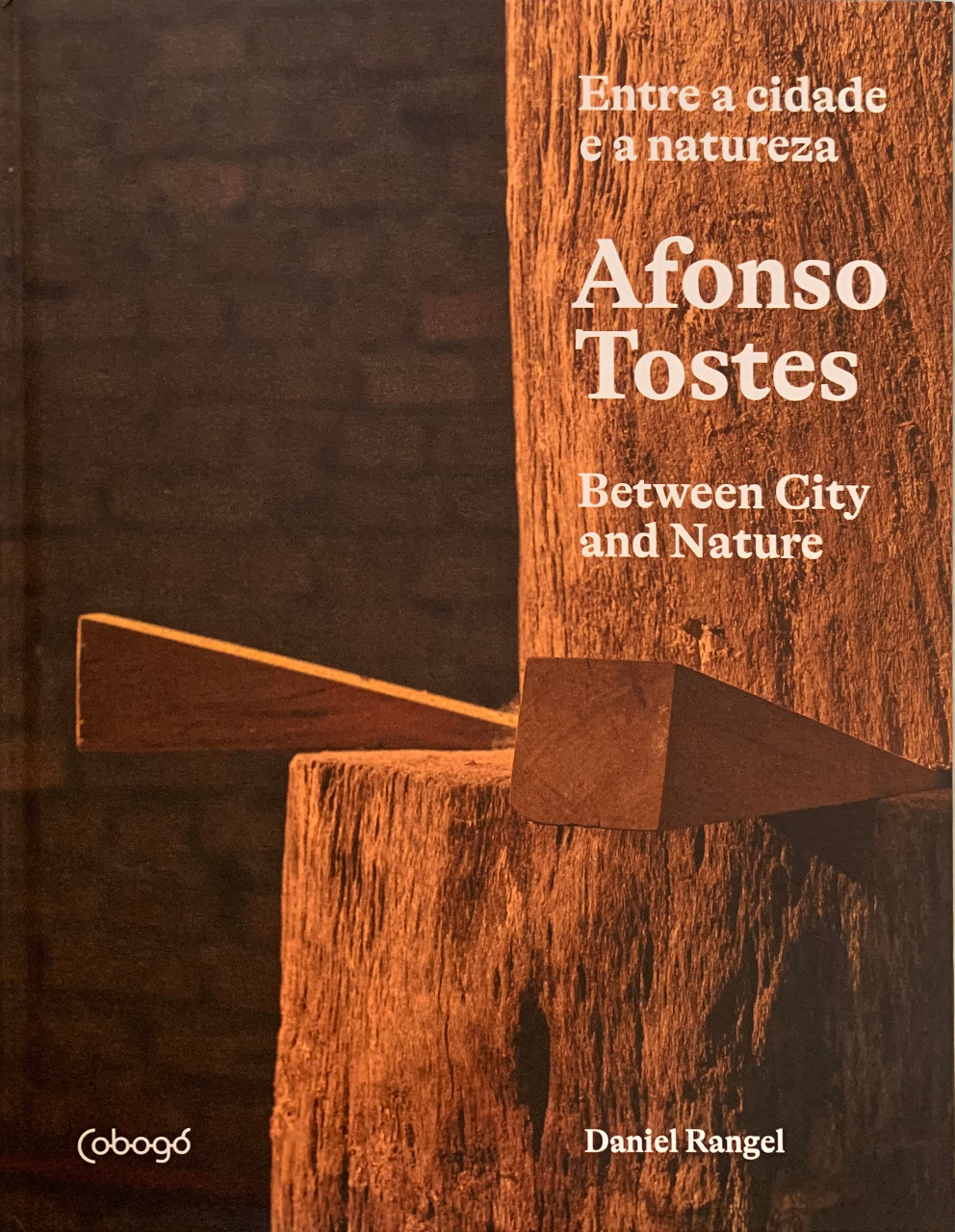 Book “Afonso Tostes: Between the city and nature”, cover. Disclosure.

Daniel Rangel is a master and doctoral candidate in Visual Poetics at the School of Communications and Arts at USP, graduated in social communication in Salvador, Bahia. He was artistic director and curator of the Institute of Contemporary Culture (ICCo) in São Paulo, Director of Museums at the Institute of Artistic and Cultural Heritage of Bahia, of the Secretary of Culture of the State Government and acted as advisor to the direction of the Museum of Modern Art of Bahia (MAMBA). Developed curatorial projects for the 8th Curitiba Biennial, Brasil (2015), the 16th Bienal de Cerveira, Portugal (2013) and the 2nd Luanda Triennale, Angola (2010). He also curated individual shows by important Brazilian artists, as Tunga, Waltercio Caldas, José Resende, Ana Maria Tavares, Carlito Carvalhosa, Eder Santos, Marcos Chaves, Marcelo Silveira, Rodrigo Braga and Arnaldo Antunes, and with the latter received, by the show “Word in Motion”, the APCA award 2015, for Best Graphic Arts Exhibition.

Afonso Tostes was born in 1965, in Belo Horizonte. In the late 1980, moved to Rio and began his studies at the School of Visual Arts (EAV) from Parque Lage, where he was a student of Daniel Senise, Charles Watson, among others. He began his career with the investigation of organic forms, initially having as support the painting and, later, turning to sculpture. His first solo was made in 1996, at the São Paulo Cultural Center, where he showed his paintings. In 2000, exhibited large canvases at the Paço Imperial, in the river. Was in 2001 who showed his sculptures, at the Paulo Fernandes gallery. Since then, shows the developments of his sculptural research in exhibitions such as the Mercosul Biennial (2005), the single Baque Virado (MAM-RJ, 2011), among others. Currently lives and works in São Paulo.

Previous: “Hidden Transiences” presents photographs of two artists at the CCCRJ
Next: How to build high end houses?