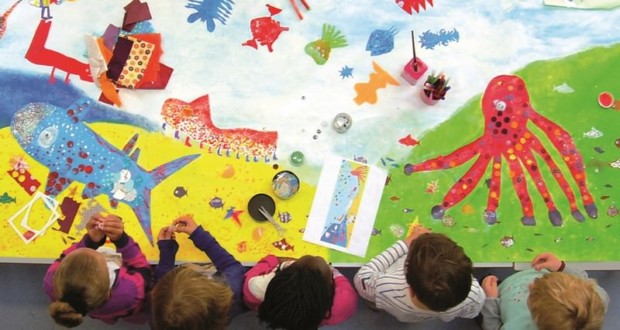 The children's Party will offer a day of activities with interactive exhibits, illustration workshop, tasting of artisan chocolates and didactic games conducted in French and in Portuguese. Admission is free.

Within the month of children, the Alliance Française of Rio de Janeiro, in its subsidiary of Botafogo, performs on the day 24 October, between 2:00 pm and 5:00 pm, the second edition of the ' Fête des Enfants ' (' Children's day ') with extensive free programming, for children from 5 years. The event is part of the commemorative programming of 130 years of the French Alliance in Brazil.

In partnership with the Bureau du Livre and the Médiathèque of Maison de France, the Alliance Française offers the unprecedented exhibition "Les héros de l ' école des loisirs” ("The heroes of École des loisirs”), in reference to the French publisher of children's books celebrating in 2015 their 50 years of creation. The show was successful in France and can be visited soon on State Park Library.

In addition to the shows with illustrations of the books from the Publisher, children can interact with the active and playful form display, by means of a Rally and various challenges: rebuild a puzzle and play memory game, for example. At the end of activities, they can draw your favorite hero and expose their creations. The schedule also includes the storytelling of two books in French and in Portuguese.

Another highlight of programming is the Creative Studio of collage. The workshop will be held by the illustrator of children's tales, Emmanuelle Houssais, on tour in Brazil, and aims to facilitate the first contact with the profession of children's Illustrator.

In addition, the master Chocolatier Mirian Rock will offer activities to interact, taste and buy handmade chocolates. During the session, she will explain the history and production of chocolate and will present a children's tale about the same topic.

The French Alliance celebrates 130 years of activities in Brazil 2015. Besides being a reference in the language, she is, no doubt, the most respected institution and known the world, when it comes to the spread of the French language and Francophone cultures. She has, currently, more than 850 units 135 countries, where they study about 500.000 students. In France, it has schools and cultural centers for foreign students. The Brazil has the world's largest network of French Alliances with 40 associations and 67 units and this year more than 40 1000 brazilian network students go on to use the new teaching method, the Alter Ego + (French Alliance Brazil version), which fit the criteria of quality of the common European framework of reference for languages defined by the Council of Europe, There is also a unique notebook developed by a team of pedagogues of the Alliance Française network Brazil working in partnership with the Publisher to address specifically the intercultural issues between France and Brazil in language learning.

It is the only institution in Brazil authorized by the Embassy of France, to apply the tests that give access to international diplomas DELF and DALF, recognized by the French Ministry of National Education. The Alliance Française is also official examination centre for international testing validity of two years TCF (The French Knowledge Test) and TEF (French Assessment Test) and the national test valid for one year Capes (recognized by agencies CAPES and CNPq MEC).

Previous: Art is the theme of the next session Philos at + Globosat
Next: Globe takes yoga, Tai chi chuan, dance and zumba to the residents of Niagara falls