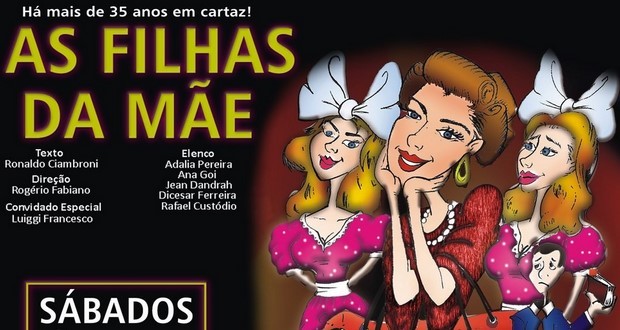 Show "The Daughters of the Mother" in Bibi Ferreira Theater. Disclosure.

Show celebrates over 35 years in poster, with more than 1 million viewers.

In 1983 Thus a great success of Ronaldo Ciambroni, "DAUGHTERS OF MOTHER", with his debut in the city of Bauru, São Paulo in a soccer field, celebrating more 35 years in poster. Were several actors, actresses, technicians, housekeeping staff, Theatres, Clubs, alternative spaces, cities and States. "The Daughters of the Mother" toured Brazil spreading joy over 2 million and spectators.

And you haven't watched it yet can not miss is commemoration of the DAUGHTERS of MOTHER, will be fun, It may not last longer 35 years. Comes!!

Previous: Ana Goulart - "Art is life, gratitude and connection ", by Edmundo Cavalcanti
Next: With direction of Englishman John Mowat, "In Bed With Molière" has two new free presentations at the Teatro Commune