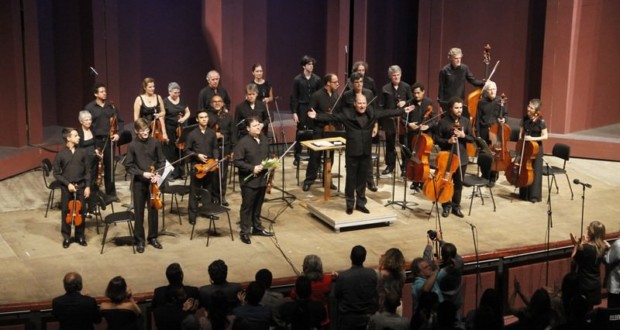 The opening of the 34th Curitiba music workshop happens Thursday (07), especially for the inaugural class open to the public who happens to 10:30, in the chapel Santa Maria, with the theme "new challenges and paradigms in the management of Musical Institutions in Brazil", and the traditional opening ceremony and concert with Claudio Cruz and Antonio Menezes, in Bento Munhoz da Rocha Netto Auditorium (Guairão), at 8:30 pm. The music workshop of Curitiba is a realization of the Ministry of culture, City of Curitiba and Cultural Foundation.

With about of 105 events, between concerts, lectures, book launches, workshops and movie showtimes. In 20 days, the public will have numerous choices of classical and popular music performances, occupying spaces as Guaíra theater, Paiol theater, Chapel Santa Maria, The Rectory of UFPR and Sesc Paço da Liberdade.

The Chairman of the FCC, Marcos Cordiolli, He emphasized that the issue of 2016 It is the largest ever held considering the number of spectacles, professionals and students involved. “When we take the FCC, in 2013, There was no guaranteed resources for realization of the music workshop. The city made a big financial effort to maintain and expand the event today is a reference in Latin America”, Remember Cordiolli.

New to this edition, the inaugural class for the scholarly and popular stage intend to deepen the study of music. Second Janete Andrade, Coordinator General artistic direction of the music workshop, the proposal is to promote the dialogue to understand the direction of music in Brazil. “It is essential to understand the entire chain involved to get new perspectives for music production in Brazil ", the firm.

Participate in a speech, the artistic director of the workshop, Claudio Cruz, conductor and Musical Director of Orq. São Paulo State Symphony Youth; Claudia Toni, a consultant to the British Council Brazil update programs and professional training for management of orchestras and Paulo Zuben, artistic-pedagogical Director of the Santa Marcelina Cultura, responsible for the management of the school of music of the State of São Paulo and Project Guri Santa Marcelina. The mediation of this meeting will be by Nelson Kunze, Editor of Concert.

The concert will be performed by the Camerata Antiqua of Curitiba, under the baton of Claudio Cruz, soils of the violinist Antonio Menezes, and the singers Jocelyn Louise, Ariadne Oliveira, Alexander Mousquer and Claudio Biaggi. The program works by Wolfgang Amadeus Mozart (1791) with the works ' Symphony n° 29 in it bigger, K 201 ' and ' Coronation mass ' and Joseph Haydn (1809) with ' Cello Concerto in c major Hob. Vllb/1 '.

This year's Edition has the sponsorship of Copel, support master from PUC-Pontifical Catholic University of Paraná, support of the Bank of Brazil and cultural support of the Centro Cultural Teatro Guaira, Consulate General of United States in São Paulo, Consulate General of Poland in Curitiba, Curitiba Hostel, Family Flour, EParaná, School of music and fine arts of Paraná, Faculty of Arts of Paraná, Lumen FM, Secretary of State for Culture, SESC da Esquina and Paço da Liberdade, UFPR/Dean of extension and culture.

Previous: Cinematheque has special programming of the 34th music workshop
Next: Philos session displays "the influence of the Beat generation", "Charlie Hebdo" and "Below" the day 8 January