Home / Art / Ulálá Balancê Block, the Alliance Française, and Carmelite Block perform partnership and parade in Copacabana on the Saturday of Carnival 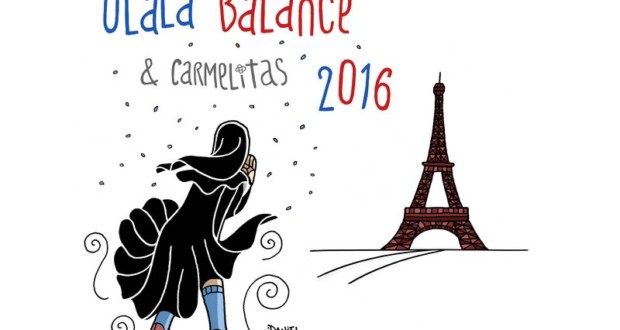 Who signs the Ooh La La Balance t-shirt 2016 is the designer Daniel Gnattali, the same that created the t-shirt of the Carmelites.

Ulálá Balancê Block, the Alliance Française, and Carmelite Block perform partnership and parade in Copacabana on the Saturday of Carnival

Saturday, 6 February, from 14 hours
Concentration near the Copacabana Fort (in front of the Hotel Sofitel)
Parade: At 15 hours. Output of the Post 6 the street Figueiredo de Magalhães, location of the dispersion, at 18h.

A Ulalá Balancê comes to its ninth year with a super news: now the French Alliance block parades in Carnival in partnership with the Block from Carmelites, Santa Teresa, one of the most traditional and charming city street blocks. The parade will be held in Copacabana on Saturday of Carnival, day 6 February. The concentration is at 14 hours, close to Copacabana Fort (in front of the Hotel Sofitel), where the block leaves at 15 hours and goes to the street de Magalhães Figueiredo, where the parade ends at 18 hours.

"I am very happy to be able to count, This year, with the partnership of our block Ulalá Balancê with the Carmelites, that allows a bigger approach of the French Alliance with the city of Rio de Janeiro and the cariocas. In addition to the Carnival, it comes, in fact, a beautiful social project ", comments the Director General of the Alliance Française of Rio de Janeiro Jean-Paul Lefevre.

The partnership, In addition to making the block with French accents yet more of the river, sealed an effective social action for the city and the Santa Teresa neighbourhood. To mark the partnership, the Alliance Française ceded 10 annual scholarships that will be distributed by the Carmelites between young people of the neighborhood communities and its surroundings. Each scholarship has a value of 6000 real. A State College Matheson, It receives students from all communities of Santa Teresa and surroundings, will select the ten students awarded scholarships. Classes start soon after the Carnival, day 15 February.

The idea of creating the Ooh La La Balance appeared in 2007, when Esther Matuck, teacher of the institution there 30 years, and Christian Gerbauld, Administrative and financial Director, suggested to the general direction of the Alliance Française to create something that integrates more students, Faculty and staff, one way in which Brazil and France approach even more. The first year of the parade was news in French newspapers and fell in love the local French community.

The block meets students, officials and teachers from the Alliance Française, do Liceu Molière, members of the Embassy, the Consulate and of the Chamber of Commerce France-Brazil, beyond the Rio lovers of French culture. This year, the block goes to the battery and the singers of the Carmelites and goes to the edge with a lot of samba no pé.

Who signs the shirt Ulalá Balancê 2016 is the designer Daniel Gnattali, the same that created the t-shirt of the Carmelites. The t-shirts are on sale in the Street address Muniz Barreto, 730 -Botafogo, and will also be sold during the concentration of the parade.

Gnattali graduated in graphic design for the University and acts as an Illustrator and visual artist. Among his works that have won rebounding, the comic covers Flip events 2011 and 2012, Rio Comicon 2010 and 2011 and Sergeant pepper Pack.

In 2013 He had three cartoons selected for the 40th Piracicaba's Humor exhibition (SP), they were subsequently exposed in the Museum of the Portuguese language, in São Paulo. Still 2013, in partnership with the writer Paloma Monteiro, released his first children's book: The 1000 Ritinha hair (Ed. Editorial Seed). Signs the verb column-"little bird", published weekly on the site RioETC, a kind of Observatory of the "charming" streets of soul "Cidade Maravilhosa".

The museum was created in 1990 by peladeiros who played football in what is now the Park of Ruins, in Santa Teresa, the block of the Carmelites won over its 26 years the affection of revelers by irreverence and always combining party culture.

What differentiates the Carmelites of the remaining blocks is the love of its organizers in the neighborhood in which parades. His plots always speak of the tram, the architecture, of nature and other delights of Santa Teresa, but do not fail to report when it is abused.

With this profile, celebrated very block the partnership with the Alliance Française, for her to allow the Carmelites the realization of an important social action in Santa Teresa.

Is the only institution in Brazil authorized by the Embassy of France to apply the tests that give access to the DELF and DALF diplomas international, recognized by the French Ministry of National Education. The Alliance Française is also official examination centre for international testing validity of two years TCF (The French Knowledge Test) and TEF (French Assessment Test) national test CAPES and CNPq, with one year validity, (recognized by CAPES and CNPq of MEC). The Alliance Française in Brazil develops partnerships with numerous French and Brazilian companies, In addition to being an essential actor of franco-Brazilian cultural dialogue.