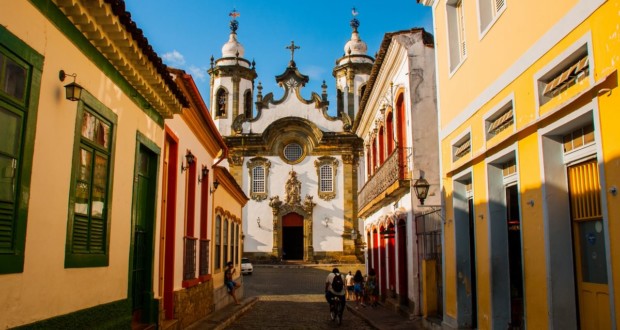 Lab edition calls for ideas that use the internet to extrapolate physical barriers to heritage. Selected people go through a co-creation lab and can receive R $ 50 thousand of match for their crowdfunding campaigns.

Analyzing the year of 2020 and understanding the needs of the culture area, which was also heavily impacted by the pandemic, BNDES, Benfeitoria and SITAWI launch the new edition of Macthfundig BNDES +. The Lab Edition of the program, designed for material and immaterial Cultural Heritage of all regions of Brazil, as in previous editions of 2019 and 2020, comes with a differential: is totally focused on the digital field. This notice, launched on the last day 18, will receive projects that want to use the internet as a tool to extrapolate the physical boundaries of public contact and interaction with heritage. Registration is open until 18/12.

According to Luciane Gorgulho, head of the urban development department, culture and tourism “Matchfunding BNDES + - Lab Edition reinforces the reach of the Program, by offering support to the structuring of new projects in the co-creation laboratory. With this, enhances the impact of the program in boosting Brazilian Cultural Heritage, sector greatly impacted by the pandemic, stimulating the approach of the public through digital, inviting society to be part of this promotion movement, awareness and collective care for what is ours. ”

In the first phase of this edition, up to 15 proposals, three per region, that will go through a development process, through a month-long creative lab, conducted by Benfeitoria. In this process there will be an immersion of co-creation of ideas, in order to transform them into even more innovative projects with high potential for mobilization.

After the lab, those selected will present their projects, which should have fundraising goals of R $ 75 thousand, to a panel of independent experts. In this second phase, will be chosen until 10 projects that will participate in the Matchfunding stage, where each real collected through collective financing will be tripled by the BNDES. Projects that are not selected by the bank may apply to participate in traditional crowdfunding.

The amount of the fund available for this call, as well as the number of projects selected for the Matchfunding stage, will only be known in March 2021. This fund is composed of the remaining value of the campaigns from the second call of Matchfunding BNDES, from 2020. not all you give 3 calls (2019, 2020 and Lab Edition) BNDES will invest up to R $ 4 million in projects.

Last year, of the 20 selected projects, 18 reached their collection goals and were made possible with the support of more than 4 thousand benefactors who, together with BNDES, invested more than R $ 4.5 million in campaigns. Yasmin Youssef, manager of special partnerships at Benfeitoria, account that 60% of them had never supported a heritage project before and that 44% of them had never supported projects via crowdfunding. Yasmin said, yet, that the program has trained more than 7 thousand people online and in person (when events were possible) in crowdfunding, since 2019.

Three of the projects selected from the previous edition are currently being captured on the channel. And, coming soon, others will be launched. “This year's call is twofold – collaborate with a project or send your”, Leonardo Letelier said, CEO of SITAWI, supplementing: “matchfunding has proven to be a powerful tool to unite all social spheres in favor of a single goal, ensuring that the sponsor's investment is directed exclusively to projects with collective interest and engagement. Yes, no doubt, a form of promotion that is here to stay”.

launched in 2011, the Improvement (www.benfeitoria.com) is the crowdfunding platform (crowdfunding) most innovative and efficient in Brazil. With the highest success rate in Brazil since launch, has already mobilized almost R$80 million (not counting the match contributions) about 300 thousand employees to give life to more than 6 thousand projects. It was the first platform in the world not to charge mandatory commission from those who collect, the first in Brazil to launch recurring crowdfunding, and the only one to work with large notices via Matchfunding. Among its main development partners, are BNDES, Tide Setubal Foundation, UN Women, SEBRAE, Nature, Coca-Cola Institute, Ambev and Itaú. Only this year, more than R $ 44Million injected in fundraising campaigns by partners through Matchfunding.

SITAWI Finances for Good (www.sitawi.net) is a non-profit association founded in 2008 with the mission of mobilizing capital for positive socio-environmental impact. Pioneer in the development of financial solutions for impact, was responsible for creating relevant innovations in the sector, such as Social and Environmental Loans and the Management of Philanthropic and Revolving Funds – and has already mobilized more than R $ 60 million, supporting more than 250 initiatives that reached more than 700 thousand people. In 2019, for every R $ 1 in donations for SITAWI operations, it was possible to mobilize R $ 25 for a positive socio-environmental impact.

Founded in 1952 and currently linked to the Ministry of Economy, BNDES is the main instrument of the Federal Government to promote long-term investments in the Brazilian economy. Its actions focus on the socio-environmental and economic impact in Brazil. The Bank offers special conditions for micro, small and medium-sized enterprises, in addition to social investment lines, directed towards education and health, family agriculture, basic sanitation and urban transport. In crisis situations, the Bank acts in an anti-cyclical manner and assists in formulating solutions for the resumption of economic growth.

Previous: Marlon Silva releases All the Poems I Could Write
Next: At ‘46’ in the second half: music about resilience marks the return of singer Ana Lélia to the music scene inside and outside the country