Home / Art / Melting cultures of various, Madureira will be the next scroll Carioca script in the month of Black Consciousness 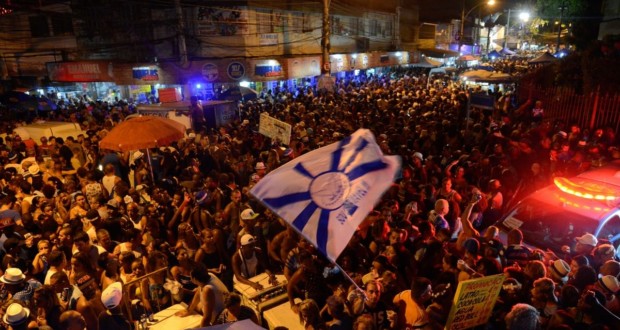 Melting cultures of various, Madureira will be the next scroll Carioca script in the month of Black Consciousness

Rural area in the century 17 the industrial district at the beginning of the century 20, the neighborhood is now one of the cradles samba of Rio de Janeiro. House of traditional schools Portela and Imperio Serrano and Jongo da Serrinha, Madureira será o próximo roteiro do Rolé Carioca – destino mais do que apropriado para celebrar o mês da Consciência Negra. The ride, free, will take place on 24 November (Sunday) with meeting point at Madureira Park (Boiler input the street Soares) at 9:00. There is no talk of the region without remembering sambas portraying their daily lives and packed dawns; refer the stately images of schools that are pride of the residents of the neighborhood and revere characters that are part of its history, as Dona Ivone Lara, Monarco, Christmas Portela and Paulinho da Viola ambassador.

Madureira houses the tradition of jongo and the pulse of contemporary dances charm, of black culture references. That's where is located one of the most important popular markets in the city and where is the park turned leisure reference and culture of North Rio area. District cut the railway line built by Dom Pedro II 1890, Madureira still has the bucolic atmosphere of the suburbs: houses with tiled facades, duplexes with yards, neighbors chatting in chairs placed in the street, phonographs playing old sambas. Who sees the neighborhood today can not imagine that the area was once a large farm cattle and cane sugar,, whose owner - Lourenço Madureira - named the place.

From the end of the century 19 and beginning of the century 20, with the installation of the railway, the increasing industrialization of the country and the expulsion of the central areas of city workers, the farm is subdivided and Madureira becomes one of the main neighborhoods of Rio suburb. Little by little, especially during the Vargas government, immigrants from various countries came to Brazil to work in factories and farms, taking the suburban setting to be filled with people of different nationalities. Thus, Portuguese, Turkish, Lebanese, German, Poles and Russians started to live with the residents of Madureira and help give the neighborhood its current face.

About hang out Carioca

Olhares novos e inusitados sobre a cidade é uma das propostas do Rolé Carioca – project, which is in its 7th edition, We have visited different itineraries that gathered over 18 thousand people, crossing over 200 kilometers through the streets of Rio de Janeiro since 2013. or portal www.rolecarioca.com.br gathers information, trivia and historical data on all the scripts already made. Recently the Heritage Institute National Historic and Artistic (IPHAN), linked to the Ministry of Citizenship, escolheu o Rolé Carioca como um dos oito vencedores do Prêmio Rodrigo Melo Franco de Andrade em 2019 – running over 300 whole country projects. Main awards on preservation and development of heritage in Brazil, Rodrigo Award recognizes, three decades ago, preservation actions that express the diversity and richness of cultural property across the country. The project won the category excellence initiatives in the field of Cultural Heritage Material.

Previous: BASE gallery on display with feminine vision
Next: Check out the lectures and workshops in the House-Museum Ema Klabin