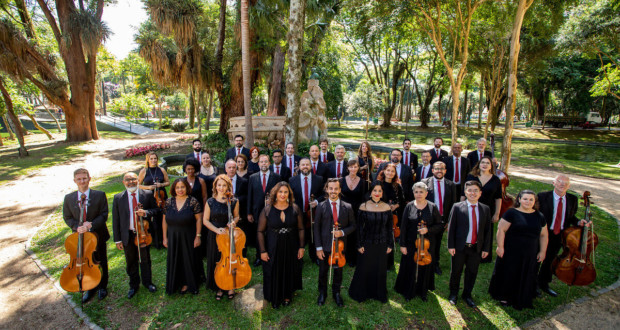 Scheduled until December, the Camerata Antiqua de Curitiba discloses the schedule of face-to-face concerts of the second half of 2021. There will be ten concerts - between performances by the orchestra, of the choir and the complete formation of the Camerata.

The premiere will be at Capela Santa Maria with the City of Curitiba Chamber Orchestra, This Saturday (28/9) e domingo (29/9), às 18h30. All sanitary protocols against covid-19 will be respected. Find out the details here

The harpsichordist Fernando Cordella is the concert's musical director. About Ciclo Bach: The Music of the Family is the first of three semester programs dedicated to works by the composer who was most in the group's trajectory and who marks this moment of transition, Johann Sebastian Bach (1685-1750).

Ouverture Suite in E minor, by Johann Bernhard Bach (1676-1749), cousin of the honored composer, Opens the concert, followed by Brandenburg Concert nº 3 in G Major and Concerto for 2 violins, with violin solos by Winston Ramalho and Dan Tolomony.

Still this season, Cordella will also be the musical director of the concert that ends the season., in the days 10 and 11 of december, with the liturgical works of Antonio Vivaldi (1678-1741), Blessed is the man (Camerata's unprecedented achievement) Glory to God in the Highest.

In addition to the virtuoso house musicians, make their presence known, this season, concerts under the artistic direction and conduct of renowned musicians, such as violinists Emmanuele Baldini and Alejandro Aldana and conductors Marcos Arakaki, Mara Campos and Diego Schuck Biasibetti.

The second Bach Cycle takes place in September with musical direction and solo violin by the concert hall of the São Paulo State Symphony Orchestra, Emmanuele Baldini. On stage with the City of Curitiba Chamber Orchestra will be Zélia Brandão, na flauta solo and Alessandro Santoro, cravo alone.

Camerata Antiqua from Curitiba joins for the concert that closes the cycle, in the days 29 and 30 October. With musical direction by Diego Schuck Biasibetti, two Bach Cantatas will be performed.

Still this semester, the Chamber Orchestra receives the Pernambuco conductor Marcos Arakaki with the concert The Music of the Armorial Movement in Brazil, in the days 8 and 9 October. Violinist Alejandro Aldana and pianist Fábio Martino also enrich the season, in the days 19 and 20 November.

The official conductor of the Camerata Antiqua Choir of Curitiba, Mara Campos, will be ahead of the group in two concerts. In Tickets, Camerata presents on the days 24 and 25 September, contemporary works by Ola Gjeilo (1978) e Jake Runestad (1986). And she will also be the conductor in A Terceira Margem, only exclusive performance planned for the choir, in the days 26 and 27 November.

The season 2021 Camerata Antiqua de Curitiba is a realization of the City Hall of Curitiba, Curitiba Cultural Foundation and the Curitiba Institute of Art and Culture (ICAC), Special Secretariat of Culture, Ministry of Tourism Patria Beloved Brazil, Sponsored by the Ministry of Tourism, Volvo do Brasil and Positivo Didactic Solutions.

To find out the entire schedule, visit the website: icac.org.br/eventos

Previous: Rolé Carioca de Agosto takes a virtual tour of Jacarepaguá
Next: Sets, gastronomy, visual arts and much more in the cultural calendar of the Cobogó Market