Home / Art / Camerata ends season 2015 with "the Messiah" by Handel 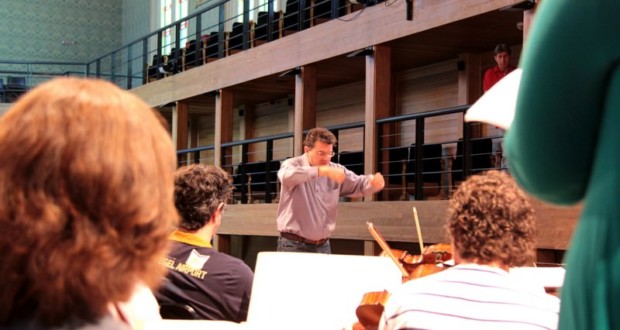 Camerata ends season 2015 with "the Messiah" by Handel

Work recognized by Handel, "The Messiah" will be presented by the Camerata Antiqua of Curitiba this Friday (18), at 8:0 pm, it is Saturday (19), às 18h30. The concert ends the season 2015 has Regency of Italian Emmanuelle Baldini and Graciela Oddoni soils (Argentina), Paul Master (Paraná), Miguel Geraldi (São Paulo) and Norbert Steidl (Áustria). Yet on the day 17, with free entry, turns out the lecture of Osvaldo works Colarusso.

Considered the most famous work of Georg Friedrich Händel, "The Messiah" was designed for Easter, but it has become tradition to perform this oratory during advent, it means, the run-up to Christmas parties. The composition is based on the holy books of the old and New Testament, therefore, fully immersed in spirituality. In the key of g minor, is not synonymous with drama or melancholy, but of intimacy and nostalgia.

Further information about the Repertoire are passed on to the public in the lecture of the day 17, at 8:0 pm, before the concerts. The pré-concertos have been a practice adopted by the Camerata, so that the public can enjoy the presentations with information about the context of historic and artistic works. This time, the speaker is the Regent Osvaldo Colarusso, It also develops activities as a producer and presenter of Classical music programs in the State of Paraná and Broadcaster holds a class of Harmony and analysis.

The Regent -Born in Trieste, Italy, and currently living in Brazil, Emmanuelle Baldini's "Concertino" the Orquestra Sinfônica do Estado de São Paulo (OSESP) and a member of the String Quartet OSESP. With the Orchestra, in 2009, Baldini presented the full cycle of the violin concertos of Mozart, conducting and playing at the same time, in a performance that earned him Carlos Gomes Award nomination of classical music. The musician displays roles in important European musical groups. About his performance as violinist, the celebrated Italian conductor Claudio Abbado wrote: "I was impressed with their musical quality and with such technical skill".

With training from the Conservatory of Geneva (Switzerland) and specialization in Berlin (Germany), Baldini was winner of several international competitions, the first of them to 12 years old, and performed in recitals in major European cities, In addition to performing long tours through South America, United States, Australia and Japan. Features extensive discography, the CD Franck Sonatas and Magnard, highly praised by the critics. As a soloist in the Repertoire camerístico, shared the stage with Ricardo Castro, Silvia Chiesa, Arnaldo Cohen, Antonio Meneses, Caio Pagano, Luca Ranieri, Maurizio Zanini and Lilya Zilberstein.

Previous: Play "Ubu King" will be staged at the teatro do Sesc Sorocaba
Next: Paiol Theater brings together lectures by immigrants and refugees from seven countries