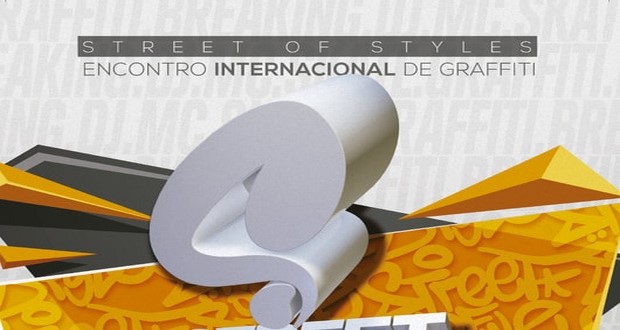 From 10 to 15 April, Curitiba hosts the most important graffiti event held in Brazil: the 7th edition of the Street Styles - International Graffiti Meeting. In this period, two hundred invited artists, from all over Brazil and 30 countries, will be at various points of Curitiba to bring art, culture and information. The proposal is to transform the walls and spaces of the city in true art galleries in the open.

With a diverse and free programming, the meeting will offer workshops, lectures, workshops, pocket shows, circuit skate, outdoor performances, Breaking battles dancers (Street dance) and even distribution of plants and other attractions.

"The event is coming up with a new character, that is to promote urban languages ​​Curitiba. The event is a basically graffiti festival, but it addresses several languages. They are directly invited two hundred artists and about 1200 artists who will be participating indirectly Festival, in addition to the audience ", says event organizer, Michael Devis.

According to the organizer, The event last year was attended by 35 thousand people. He believes that this issue, to be in the streets, may attract even more people. "The event will take place at various locations, the whole are 28 spaces in the city, at the same time. Surely the public will be more expressive ", calculated.

Devis points out that last year the meeting has become the third largest in the world and the largest in Latin America. "Everyone today that speaks of Street Art on the planet wants to go through Curitiba and know what the festival is doing here and know what artists are painting the town, because we have a legacy of works painted here. There are also other festivals who want to have as a trend what we are doing here ", highlights.

This year, the meeting will offer a route of urban art by Curitiba. In an unprecedented action, 12 parts of the city will be painted simultaneously. According Devis, You will have a bus that will circulate through all these sites. The public will be able to board the vehicle for free and see the artists performing the live paintings.

Already the San Francisco ruins will be the big stage of the event, which will take local attractions, São Paulo and Rio de Janeiro, plus a special guest of Chile.

One of the highlights of the event's opening schedule in the spaces of the Cultural Foundation, on 10, will be in Gibiteca, where art will join the social inclusion with a Stencil Workshop with Autistic. The event, free, starts at 14h, and will be commanded by space engineer, Fulvius Pacheco. At the same place, at 4:00 pm, It happens Autism Awareness Graffiti, also with Fulvio.

On Wednesday (11) from 19h to 21h, the University Theater of Curitiba (TUC), receives the lecture on Violence against Women. The topic will be discussed by Raisa, the Central Union of Slums (CUFA-PR).

On Thursday (12), to receive Gibiteca, at 4:00 pm, Mylle Silva for Experimental Writing Workshop. At the same time Joe CUFA gives lecture on Society versus Drugs.

In the sixth, the attraction is for the "Day of Illustrator" with the debate "Cartunalhas", which will have the participation of cartoonists Benett, Jacobsen, Sampaio, Passion, Pry e Recchia. The event will be at 19h, in Curitiba Gibiteca.

Concluding the program, on Sunday (15), from 14h to 19h, It is the battle of Breaking Street Styles of the Curitiba Memorial. The event has the support of the Curitiba Cultural Foundation (FCC) and the full program of the International Graffiti Meeting is available on the site: www.streetofstyles.com