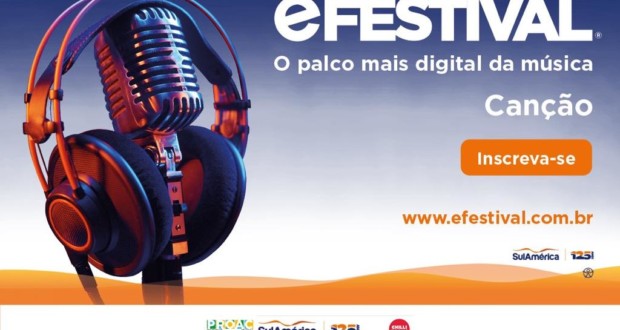 eFestival, The most digital stage of music, Flyer. Disclosure.

The most digital stage of music aims to reveal new talents

Considered one of the precursor platforms for valuing culture and stimulating new talents, o eFestival, that in 2021 complete 20 years, returns with the important mission of rebuilding the cultural scene, boosting and giving visibility to music revelations.

Released in 2001, at a time when only 5 millions of Brazilians actively used the internet, the festival was a pioneer in reaching more than 1,5 million hits, revealing the new talents of Brazil through the web.

With the restrictions imposed by the COVID-19 pandemic, the musical contest, that has the internet as its main realization tool, has all the conditions to increase the success of past editions, that add up to thousands of registered artists and connected Internet users, in addition to high reach and engagement from social networks and the strategies of each participant to win votes.

As in previous editions, the project takes place over eight months, divided into four stages, the first being related to registration, the second to curatorial analysis, the third to popular voting and, Finally, to the award.

The festival is divided into two categories – Instrumental eFestival and Canção eFestival - and three subcategories – general public, health professionals and insurance brokers, being that, for registration in the last two, presentation of the active activity record is mandatory (CRM, Susep, among others).

During the first stage, that happens between 1st of March and 30 of June, artists must access the website www.efestival.com.br to know the project, your history, the tutorial with the step by step how to subscribe, the detailed regulation and, of course, make your subscriptions.

In the second stage, the project curators - the journalist, editor and music critic Carlos Calado, and the conductor, arranger, producer, composer and pianist Ruriá Duprat, in partnership with two experts from the technical jury, will select the ten finalists from each subcategory, judging those that best meet the criteria set out in the official regulation – creativity, originality, harmonization, interpretation and voice (the latter only in the Song category). The finalists will be announced on 29 July and the popular vote on the internet will take place from the day 30 of the same month and throughout the month of August. 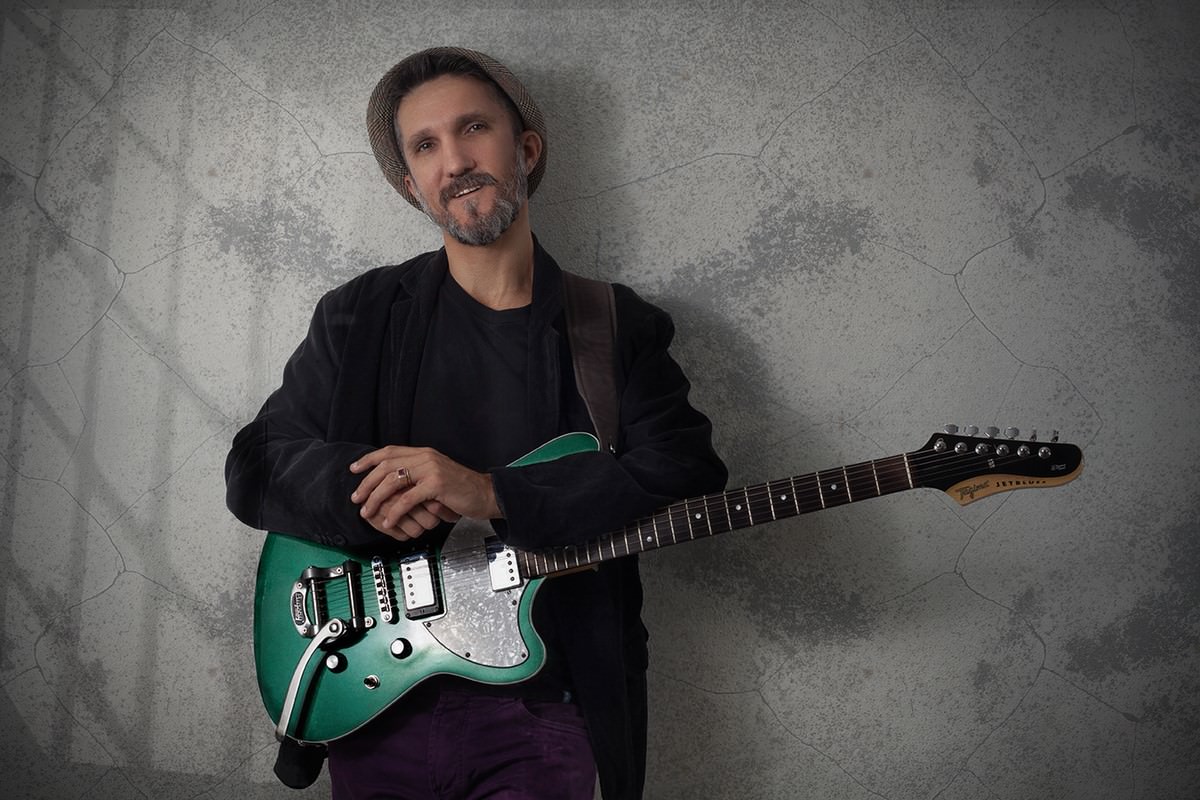 The winners will be announced on the day 15 September, awarding the top five in each subcategory with coaching given by the curators and cash prizes for the first three. In addition, the great champions of each subcategory will share the stage with important names of national music.

EFestival Instrumental is sponsored by SulAmérica and supported by Uninassau. The Song category is signed by Chilli Beans and also by the insurance company, you just completed 125 years of history.

Created and realized by Dançar Marketing, that this year begins the celebrations of its 40 years as the most consistent cultural marketing company in Brazil, the eFestival platform is a partnership with the Ministry of Tourism, through the Special Secretariat for Culture, and the Government of the State of São Paulo, through the Secretariat of Culture and Creative Economy. 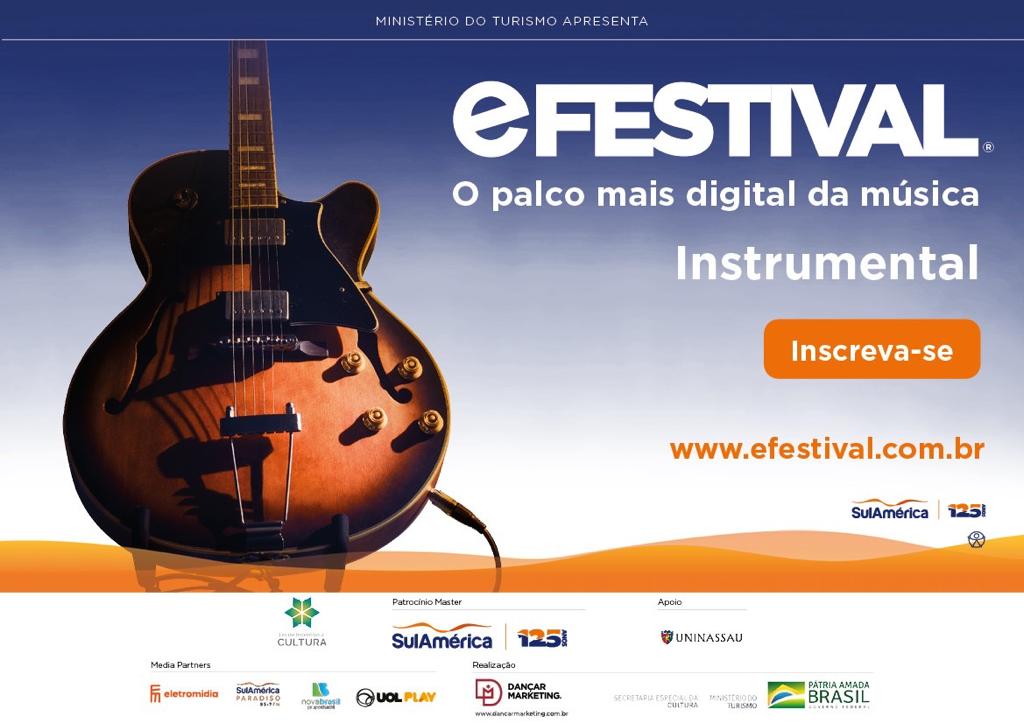 eFestival, The most digital stage of music, Flyer. Disclosure.

SulAmérica is a 125 years dedicated to delivering Comprehensive Health to its more than 7 millions of customers through health products and services, Dental, Life, Pensions and Investments. The company's mission is to improve people's lives, offering support, safety and autonomy at every moment and physical health decision, emotional and financial. For this, has engaged and committed employees, in addition to a distribution network with thousands of insurance brokers across Brazil. In 2020, the company recorded operating revenues of R $ 20 billion, plus more than R $ 45,9 billions under management of its asset.

SulAmérica supports social initiatives, cultural and sporting activities since its foundation, there is 125 years. With its program Circuito SulAmérica Music and Movement, the company invested in cultural and sports projects through the Culture Incentive Law. For more than two decades, sponsors the Ouro Preto Orchestra and its Academy, an initiative that trains and gives scholarships to young musicians. The company also supports social projects focused on physical health, emotional and financial, through incentive laws such as the Elderly Fund and the Childhood and Adolescence Fund. The projects focus on prevention and expansion of health care, health promotion and emotional well-being and training, income generation and financial education.

TO UNINASSAU – Centro Universitário Maurício de Nassau is a private higher education institution maintained by the Ser Educacional group. Founded by the Paraiba businessman Janguiê Diniz, has units in several states in the Northeast regions, North and Midwest of Brazil.

The Institution continued the project of the Legal Bureau – Educational Complex of Teaching and Research, founded in 1994 and that had the objective of preparing candidates for competitive public tenders. Later on, BJ Colégio e Curso appears and, in 2003, with the publication in the Official Gazette of the Union of the Ordinance 1109, of the MEC, the Maurício de Nassau College is officially born. Already in 2012, the MEC, through ordinance no. 701 of Minister Aloizio Mercadante, attested to the new stage of the Institution – the Maurício de Nassau University Center.

With a history full of pioneering spirit, Dançar Marketing has been driving the Brazilian cultural event and entertainment marketing market for 40 years. The agency established an important milestone for cultural democratization, being the first to make great presentations open air no country, as “Vinólia Concerts”, the largest outdoor classical music event ever held in Brazil. The project inaugurated Ibirapuera Park as a cultural spot on Sunday mornings, placing it as one of the main stages for major events in São Paulo. The relevance and success of the project also won over the Brazilian media, relying on radio channel broadcasts, TV Cultura e Bandeirantes.

Founded in 1982, from the creation of the first periodical specialized in dance in Latin America - Revista Dançar -, the company brings together millions of spectators in its countless shows, shows, proprietary and social projects. In its portfolio are great international tours of iconic artists like Andrea Bocelli, Luciano Pavarotti, Jose Carreras, Sarah Brightman, Kiri Te Kanawa, George Benson, Joss Stone, Diana Krall, Norah Jones, Chris Cornell, Jeff Beck, Richie Sambora among others. Dançar Marketing has always been ahead of the market in the conception and realization of projects such as HSBC Music Series, Avon Women in Concert, Volkswagen Theatrical Creation, Nestlé Travel through Literature, AstraZeneca Live the Culture!, among others; exhibitions such as Riachuelo Mostra Moda and Samsung Rock Exhibition and festivals such as Telefônica Open Jazz, Festival of the Patron Saint, eFestival and Samsung Best of Blues and Rock - which, in the last editions brought some of the greatest guitarists in the world, como Joe Satriani, Tom Morello e Zakk Wylde.

Visit www.dancarmarketing.com.br and get to know the projects.