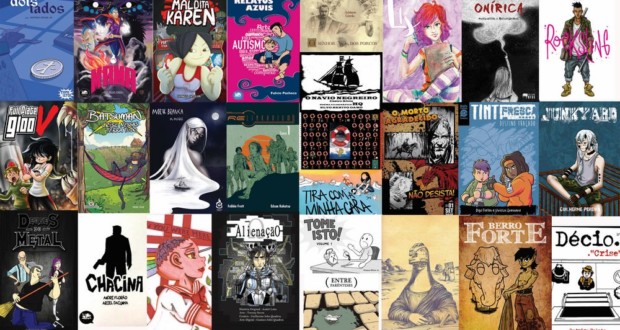 The Curitiba Gibiteca promotes next Friday (21), at 19h, the biggest event of the collective history of the city, with the participation of 28 curitibanas magazines produced for the Bienal of Comics from Curitiba.

"These publications, added to the 12 releases already carried out on Gibiteca in 2016, demonstrate the effervescence of Curitiba comic production in town this year and of Gibiteca de Curitiba in his current headquarters, educational pole, cultural and social designers curitibanos ", says the Coordinator of Gibiteca, Fulvio Pacheco.

Attending the event the following publications:

“Lord of the Pigs”, of Adriano Loyola, HQ where in full Renaissance period, instead of the son of a merchant without importance, criminals end up kidnapping, without wishing to, the proper heir to the throne of Milan.

“Slave Ship”, of Elvo Benito Damo, comic publication is made from 207 woodcuts, on display at Gibiteca, counting the poem de Castro Alves.

“Blue Reports”, Fulvio Pacheco, Biodata HQ where the author talks about autism from the discovery of the disorder in your child, in itself and various other artists and the importance of the inclusion of autistic society.

“Mama”, by Douglas Cruz, a world filled with magic finds himself threatened by a great evil, and Mama will have to try to resolve this because it's your destiny in this world.

“Slaughter”, Ariel da Cunha and Andrew Crocket, story that unfolds in one night with many persecutions, betrayals and brutality.

"Damn Karen”, Francis Ortolan, Comic book that tells the life and adventures of Karen, a girl with no notion that makes a lot of nonsense.

"White Death”, bad Matiazi. Talks about the legend of the oceans haunted by an immortal and his three white Tigers.

“Relinkarium”, Kohatsu and Evelyn Edson Fratt, where the isolated Village of Hill's aging and, to survive, their last young people need to leave your home for the first time in search of help.

“Nothing Complicated!”, by Kuíca, a crazy about comics and his artistic adventure. Travel through time and realize a dream.

“Batsuman – Crisis In These Earth All“, Yoshi Itice, second collection of comics hero more “wrong” who ever lived.

“The Samurai – Yorimichi“, of Tarjavirmakari, in pursuit of your purpose in life, Michiko goes through tortuous paths and back 20 years in time.

“Dreamlike”, of Phellip and Melissa Waine Garabeli presents 5 reports based on the universe of the dreams of a child.

“Gods of Metal”, by Ugo, a story of a head banger on a Metalhead. A story with metal in the heart.

“Strip With My Face”, of Cecilia Fumaneri, bringing together comics based on moments of chaotic head of the author to tell the greatest adventure of all: our day to day.

“The Grateful Dead and don't give up”, by André Stahlschmidt, with screenplay and art influenced by classical fantasy adventure series.

“Decius – Crisis“, of Rodrigo Baker, LGBT-themed, tells the story of an investigator in a boastful society, discriminatory and, at the same time, the result of the own cultural existence.

“In Parentheses”, of Well Jain, intimate comics of a page, exposes questions and feelings common to any person.”

“Wish You Were Here ", of Den, Story inspired by the music of the British rock band Pink Floyd.

”Berroforte” e “LIS”, Cristino Ernani. Berroforte had his father killed by a human and Lis talks about a crossroads of stories in that the meeting point is the young Lis.

“Two Sides”, by Antonio Edison JR. and Well with two different stories on Junio a kind of wishes.

“Full Plate Gloov”, Lucas Calvetti de Fontoura. Comic where a terrible accident brings a game from 16 bit to our world, Gloov and Gô are the only ones able to bring everything to normal again.

“Rocksling”, of Match, where in a dystopian future, Taeq will face challenges to rescue his cousin who was kidnapped.

“Take This! Volume 1 ", Antonio Edison. A collection of comics about a bald and his best friend, an alarm clock speaker.

“Alienation (Omega)”, Natsuki Miura where in the future, humans and aliens wage a war of fear and uncertainties.

“Junkyard”, William Pereira. Junkyard, where has everything imaginable.

“Fresh Paint”, to Say Freitas and Vinícius Gressana talks about an urban artist who sees his life turn after receiving the gift to turn their creations into reality.

Previous: LABLIVRE the Federal University of ABC in partnership with the Ministry of culture conduct research on Cultural production tools
Next: Design – Artistic Production, Step by step 9 of how to draw by Rosângela Vig