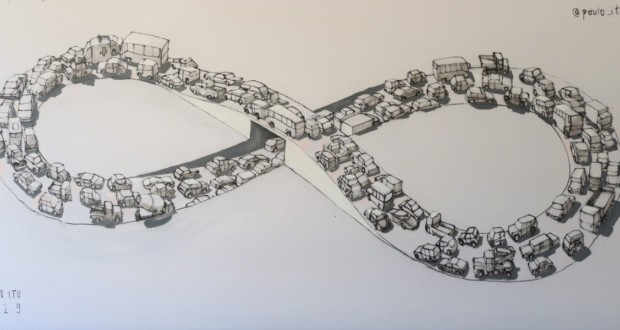 The architect and professor at the Faculty of Architecture and Urbanism at the University of São Paulo, William Wisnik, Minister the next day 31 August, Saturday, from 11h to 13h, the lecture "Work space: city, art, architecture". The meeting takes place in the Ema House Museum Klabin, in Jardim Europa, in São Paulo. Are just 35 vacancies and registrations are open at the Museum House site.

The speaker will bring out reflections of Dutch architect Rem Koolhaas on the current state of life in cities, and urban thought.

In addition to discussing the immersive works of artists in urban scale and the question of experience in the public space. "Non-places", "Generic cities", "Space junk", "Post-it cities".

And, yet, the depopulation of cities and countryside, crossed by roads and consumption, creating "transgenic landscapes", that become, increasingly, our habitat. This is, also, one of the major themes of contemporary photography.

Professor at the Faculty of Architecture and Urbanism (USP). newspaper columnist S Sheet. Paulo (2006-07 and 2016), and author of books such as Lucio Costa (Cosac Naify, 2001), Caetano Veloso (Publifolha, 2005), critical condition: adrift in cities (Publifolha, 2009), Oscar Niemeyer (Folha de s.. Paulo, 2013), work space: city, art, architecture (Issues SESC SP, 2018, com Julio Ella) Within fog and: art, contemporary architecture and technology (Ubu, 2018). Edited the volume 54 Spanish journal 2G (2010) about a work of Vilanova Artigas, and essays published in various books and magazines. Member of APCA – Paulista Association of Art Critics. It was curator of several exhibitions and the General Curator of the 10th Architecture Biennale in Sao Paulo (2013). He was awarded the "2018 Highlight" of the Brazilian Association of Art Critics (2019).

Other courses, workshops and lectures at the Ema House Museum Klabin:

In August, the House Museum Ema Klabin comes with a number of courses, workshops and lectures on various areas of human knowledge with leading experts. There are from Creative Writing courses, through photography, Art lectures, music, literature of twine, to a meeting with the artist and director of the School of Fine Arts, University of Haifa (Israel), Assi Meshullam, which will be broadcast live by social networks. See the full schedule in the House-Museum site: emaklabin.org.br

Previous: Lemos brothers present their new projects on show at Paiol
Next: Campaign seeks funding for collective display images you want to give visibility to stream flood