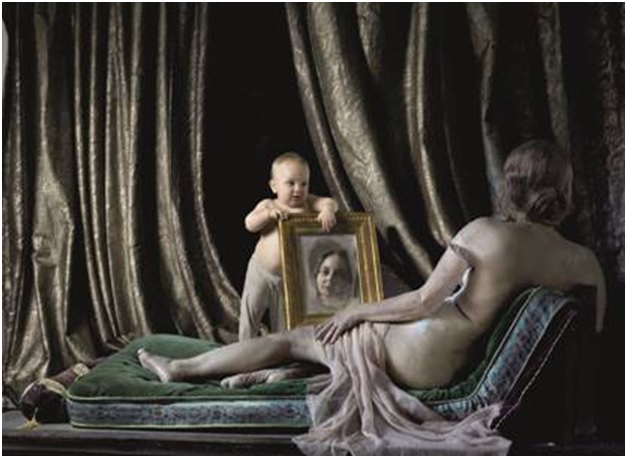 THE SIXTH EDITION OF THE SHOW HAPPENS FROM 8 OF OCTOBER. THE THEME CHOSEN BY CURATOR CLAUDIA GIANNETTI IS ' WHATSAPPROPRIATION -THE ART OF REVISITING THE ART '

After five successful editions in São Paulo, 3 m Digital art show comes to Rio de Janeiro for the first time on the day 8 October, occupying the first floor of the Progress Casting. The Elo3, event producer, invited researcher and theoretical Claudia Giannetti to be the curator of this year and this was get Vanguard artists in a changing artistic segment: cinema, photography, videoart, audiovisual and internet installation. Claudia elected as the theme of this Sixth Edition "WhatsAppropriation — the art of revisiting the art", to investigate the dialogue created by 22 national and international artists with works by painters of the past five centuries, among them, famous screens as "liberty leading the people", Delacroix; "The birth of Venus", Botticelli; or paintings of Edward Hopper, Frans Post, Guignard, among others.

The exhibition will be divided into seven thematic rooms. The themes are: Brazilian imagination, Female imagery, Large microrrelatos, Iconographies, Still lifes, Private reports and Performance. Among the guest artists are the Brazilian Vik Muniz, Nelson Leirner, Cao Guimarães, Felipe Bed, Carlos Fadon and Marcelo Coelho. And the foreign account team with Bill Viola TrailBlazer, the American video artist Martha Rosler, the Portuguese Patricia Reis, the Turkish Moral Sükran, the German Ulrike Rosenbach, the Spanish Cristina Lucas, The israeli Ori Gersht, the Italian duo Eva and Franco Mattes, the Argentines Nicola Costantino and Marcos Lopez, the Dutch performance Max Zorn and the Mexican Guillermo Gómez-Peña. Highlight, Besides, filmmakers as famous as the Austrian Gustav Deutsch, the Polish Lech Majewski and Humberto Mauro, present at the exhibition with fragments of the famous movie "the discovery of Brazil", from 1936, long inspired by the painting "the first mass in Brazil", Victor Meirelles, from 1861.

– We elect two axes for the curation of the works: the migration of images, jumping of fabrics for the digital and audiovisual support, establishing temporal bridges between the static representation of paintings from the 15TH to 20TH centuries and the current technical images, and performance articulation – explains Claudia –, with pictorial scenes that serve as inspiration for audiovisual narratives, giving life to the images in the process of revisiting the themes; and, on the other, online social platforms, that lead to real actions universe of virtual simulacrum.

The title of the show is a question (What is the ownership?), and the exhibition suggests answers, with the intention to broaden the debate and to bring artists and proposals that offer the public the opportunity to think about the art of revisiting the art.

The 3 m Brazil follows as a partner and sponsor of the Shows since its genesis. To Luiz Eduardo Sandoval, Head of marketing at 3 m, "the show reflects perfectly the spirit of the undertaking which applies science to improve life, because both the cultural project as 3 m's innovation live extreme appreciation of creativity, technology, collaboration and positive match between the legacy of past generations and enthusiastic about the future investigations ".

The Dutch artist Max Zorn, known for his work with adhesive tapes about backdrop, is producing works inspired by Brazilian art and will come to Brazil to perform a performance within the programming of Shows. And the Parque Lage, on the South side of the river, will host a workshop with Patricia Rahman, on 10 October. On Fridays, as it happens the show, appear movies related to the theme in the movies Progress casting.

Brazilian imaginary – The history Brazilian imagery was constructed from the foreign eye. As the curator Claudia Giannetti. The pre-colonial Brazil had no – as our Andean neighbors or Mexico, for example – a set of images that represent us. It was from the arrival of foreign artists to the country that we began to be represented: an identity built from the outside in. Claudia makes a bridge of this construction by Frans Post, Victor Meirelles to Guignard. And get in the artists of the 21st century a new reading on these founding works of our Brazilian identity: Felipe Bed and Cao Guimarães.

Female imagery – Five artists make up a set of perspectives on female representation in art. “While Martha Rosler deals with the role of women in the household and private surroundings, Nicola Costantino, Sükran Morals, Patricia Rahman and Ulrike Rosenbach address, In contrast, the female representation as Venus or Diana mitificadas, or as muses or femme fatale secularized”, explains Claudia. In this nucleus/living room, We found emblematic works and appropriations of easily recognizable artists such as Botticelli and Velazquez.

Large microrrelatos – “The works on display at the core dedicated to Large microrrelatos seem, at first sight, disparate. A more sensitive observation allows recognize deep dialogues between the works of Cristina Lucas, Lech Majewski, Vik Muniz and Bill Viola”, says the curator about the room whose focus is the fragmentation that puts under discussion the linear narrative, as well as the construction of the history of the people and the human condition, examined in microcosms temporal space. The artists selected by Claudia already seek, at the source, fragmented works to construct their own narratives, as Bosch and Pieter Bruegel.

Still lifes – The pinnacle of this style of realistic painting were the 17th and 18th centuries. Claudia draws attention to the fact that maybe, “most people won't be aware of how this model of representation remains until our days and as is deeply present in everyday life of consumption. Advertising photos of food or objects if appropriate the pictorial compositions of still life. (…) Now, as at the time, the goal of these representations is to capture the attention of the potential customer: the art buyers and existing consumers ". The artists selected for this core are Ori Gersht and Carlos Fadon Vicente.

Iconographies – In a world essentially iconography, Claudia elects two deeply religious images disseminated in popular imagination to deal with it: the Pietà and the last supper. “Gómez-Peña, López, Majewski and Leirner understood the paradox intrinsic to the clichéd image: its use spread to make a vulgar picture” and public domain. The iconoclastic experiences, as the performance artist Gómez-Peña, the burlesque of Marcos López photo or the works always ironic to Leirner, contrast with the re-enactment of Majewski of the crucifixion of Jesus.

Performing arts – One of the most debated nowadays in relation to performance is your model “conservation”. As an ephemeral work survive? Eva and Franco Mattes have launched the virtual reality of the Internet resources to provide an answer to that question: through simulation in Second Life. Present three works in the series Reenactments (2007-2010), that develop in the virtual space open to user participation: Imponderabilia, Marina Abramovic; Shoot, Chris Burden; and TAPP und Tastkino, by Peter Weibel and Valie Export.

Private Accounts – Perspectives on the life of ordinary people, released by the famous American painter Edward Hopper, are a source of inspiration for the work of film director Gustav Deutsch and the photographer Marcelo Coelho miner in this core, that seeks to uncover stories and private environments. Thus, Deutsch and rabbit bring a representation of the individual in the 21st century, that dialogue with the subject of the first decades of the 20th century.

About the Shows 3 m

Produced by Elo3 and sponsored by 3 m Brazil, 3 m show's blockbuster in Sao Paulo since its first edition in 2010. Throughout that time, more than 150 thousand people passed through the exhibition halls of the show. In 2015, It takes place in Rio de Janeiro, Progress casting, from 8 to 25 October, occupying the entire first floor of the historical building, which is next to the Arcos da Lapa. Are 22 artists of 13 countries, seven of them Brazilians. And 32 works divided into seven thematic rooms.

With a history of more than twenty years of theoretical and curatorial career, the Brazilian Claudia Giannetti has become an important international reference in the context of contemporary art. Doctor in art history, art expert and contemporary aesthetics, and in the relation between art, Science and technology. Former Director of important institutions, as the MECADMedia Centre of Art & Design, in Spain, and the Edith Russ-Haus for Media Art, Germany. He was Artistic Director of the Canarias Mediafest – Festival Internacional de Artes y Cultures Digitales, Las Palmas de Gran Canarias, and artistic advisor and curator of Eugénio de Almeida Forum, Portugal. Its solid academic trajectory assured him an active presence in important universities from different European countries and Latin America. Did curated by more than 130 international exhibitions and events, among others, in the Museo Nacional Centro de Arte Reina Sofía, Madrid; Centre George Pompidou, Paris; ZKM Center for Art & Media Karlsruhe, Germany, among others. He was a member of numerous juries of international art prizes and received awards for his work as writer and curator. Was important consultant for international institutions, as the Swiss Federal Information Society Strategy, Bern, Switzerland; UNESCO DigitArts, Paris; Beijing International New Media Arts, China, among others. His books have been published in multiple languages; in Brazil, his book Digital Aesthetics. Syntropy the art, Science and technology (C/art, 2006) became a reference work for understanding the media art.

3 m is well-known as one of the most innovative companies in the world. Produces thousands of imaginative products and is a leader in numerous markets – health care and traffic safety Office products, abrasives and adhesives. The success of the company begins with the ability to apply their technologies – by means of combinations – in an infinite variety of needs of its customers. Obviously, all this is possible due to the people of 3 m and its unique commitment to inspire and make people's lives easier and better around the world.

There are 11 years doing cultural productions engaged in democratization of access to art, the Elo3 alia private initiative to accomplish his purpose and extend your reach.

Always with the collaboration of great artists and professionals and the support of companies that share the same values, the society offers Elo3 doubters projects, innovators and transformers, as the 3 m Digital Art Show.