“I started to get worried about the mischaracterization of Brazilian culture. I thought of bringing together a group of artists who worked in all areas and who had similar concerns to mine so that we, together, we were looking for an erudite Brazilian art based on the popular roots of our culture. And, through this art, we fight against this process of mischaracterization of Brazilian culture”. Ariano Suassuna – in an interview aired on Rede Globo Recife, in november of 2013.

The Banco do Brasil Cultural Center opens to the public on the 30 March, at the show "ARMORIAL MOVEMENT 50 YEARS”, of exhibition that brings together art, musical meetings and conversations about Armorial art. This movement was created and led by the playwright, teacher, painter and renowned writer Ariano Suassuna (1927-2014). The project is sponsored by BB Seguros and Banco do Brasil.

Curated by Denise Mattar, the exhibition called ARMORIAL 50 has about 140 works of art (the vast majority had never left Recife) in different formats with important artists for the Armorial Movement, among them the own Ariano Suassuna, Francisco Brennand, Gilvan female, Aluísio Braga, among many other artists who were part of this important artistic movement launched in Recife, in 18 October 1970. “Curating the commemorative exhibition of the 50 years of the Armorial was a challenge. There are so many amazing artists involved., as Gilvan Samico, Francisco Brennand, Miguel dos Santos, Romero de Andrade Lima and Ariano Suassuna himself. This is just talking about the Fine Arts. To accomplish the task, the exhibition was divided into modules that present the Life and Work of Ariano, the phases of the Armorial Movement, and the References that were the basis of everything: Cordel and popular festivals. The exhibition tries to keep the magic, o humor, Alegria, the colors and the fantasy, that characterize the popular art and scholarly bias of the Armorial”, says Denise Mattar. 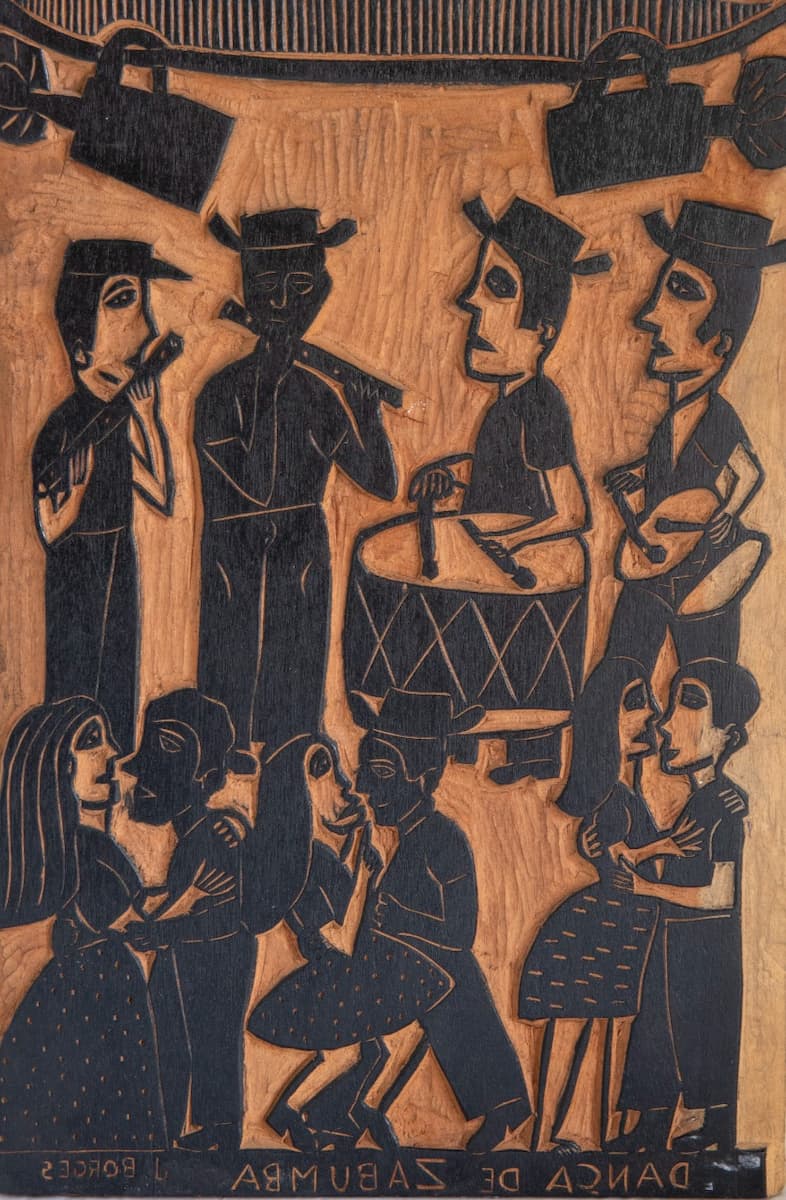 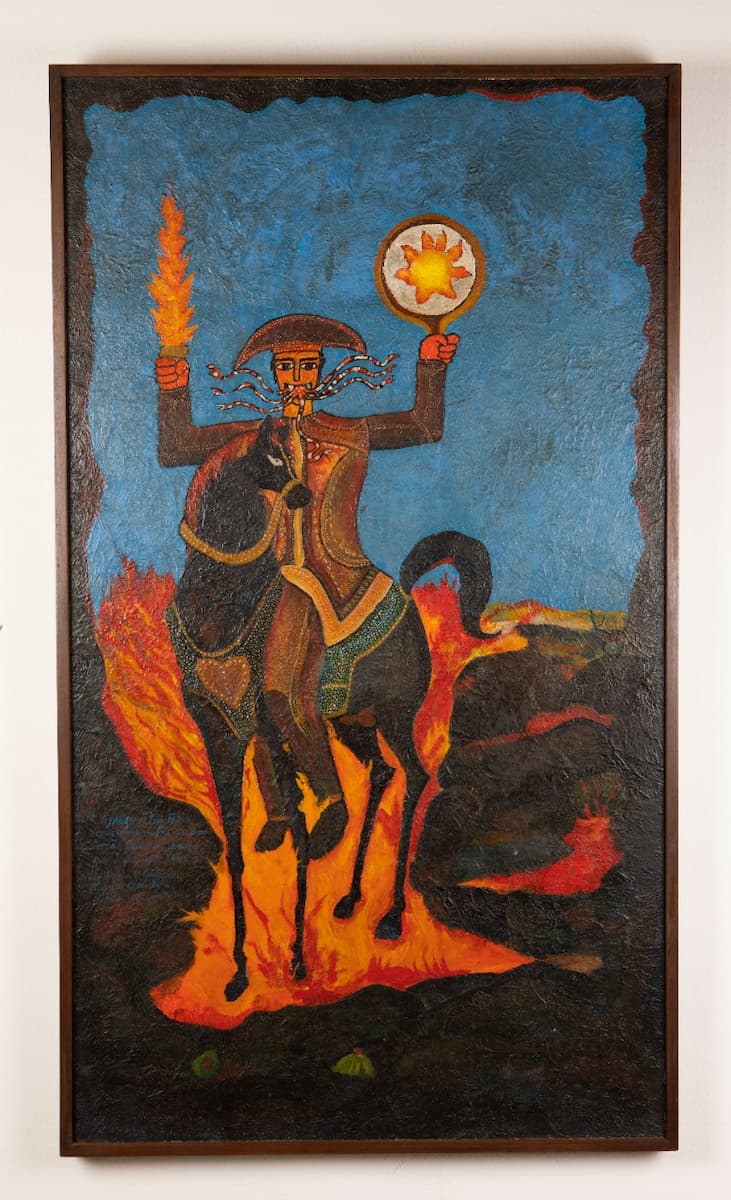 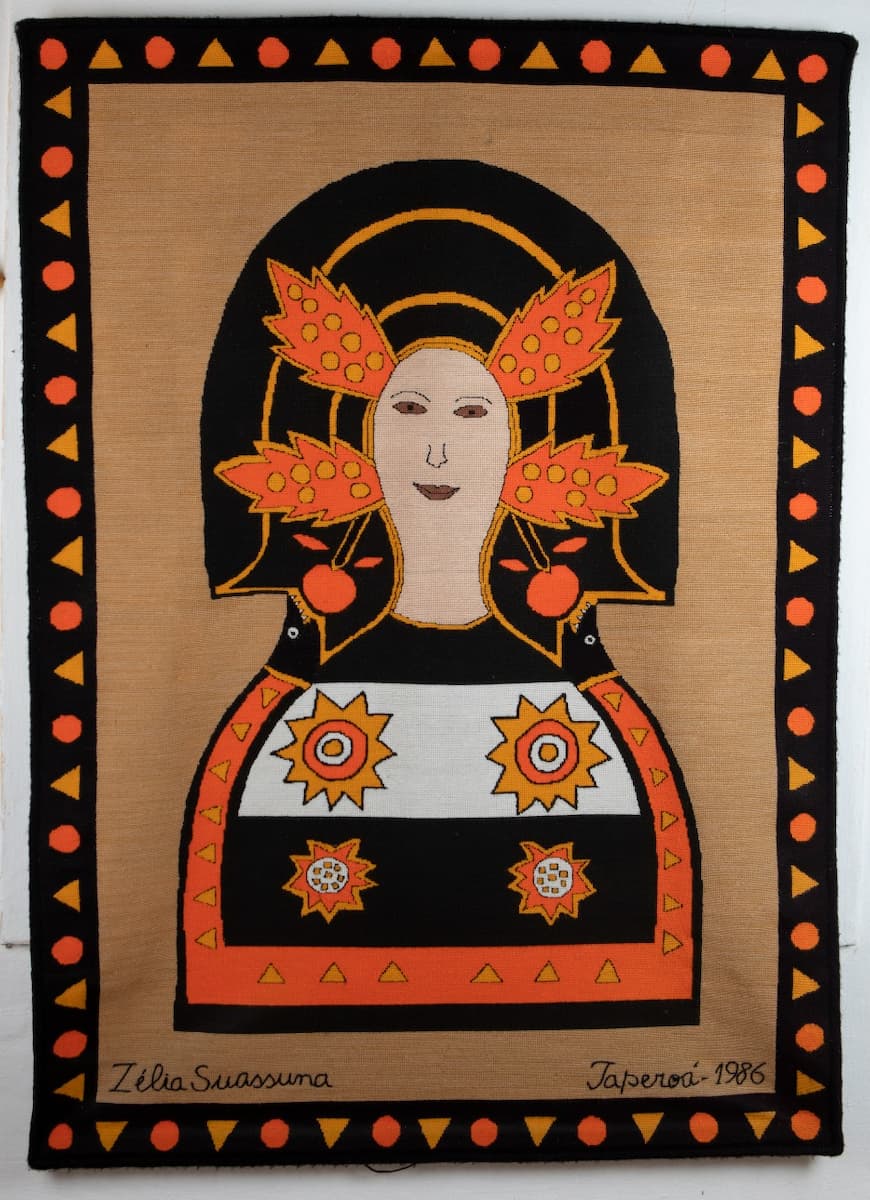 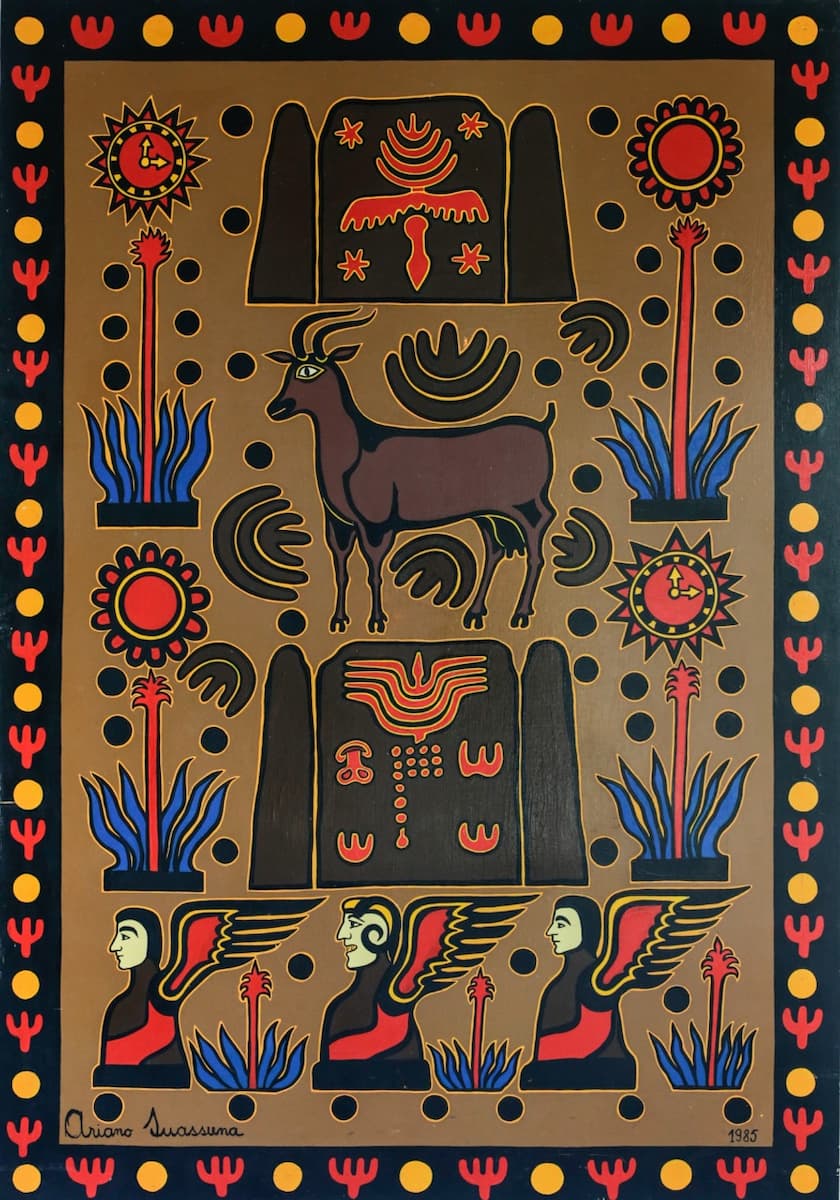 From 31 of May to 13 of June, the public will have an even deeper contact with this Movement. period in which musical shows and Conversations about Armorial Art join the exhibition schedule, which is set at CCBB Rio de Janeiro until 27 of June, month in which Suassuna would complete 95 years.

The music curator is the revered artist Antônio Madureira, an important representative of the Movement since its inception, having been invited by Ariano Suassuna to produce the arrangements and conduct the Armorial Orchestra. He does, until today, the connection of Armorial music by Brazil. Madureira brings the highest quality instrumental musicians to the public at the Exhibition, us Musical Encounters.

To explore the versatility of the Armorial Movement and the dialogue with the various artistic languages, the guest curator is the poet, teacher, fictionist and essayist Carlos Newton Junior, one of the exhibition's consultants and specialist in the work of Ariano Suassuna. “Conversations about Armorial Art” will be a cycle of theoretical/thematic meetings that will address the Armorial creation in the different genres: Literature, Teatro, Music, Dance and Visual Arts. “By promoting a retrospective of the 50 years of the Armorial, the exhibition makes it clear that the poetics of the Movement idealized by Ariano Suassuna is still alive and fruitful, indicating a direction that has been followed by artists of more than one generation, each of them going their own way. there is no need to talk, therefore, in uniformity or restriction of creative freedom, quite the opposite. The inexhaustible wealth of popular culture, greatest source of armorial art, with its Iberian elements, indigenous and african, induced the creation of an open poetics, that connects us, in the last instance, both the tradition of Mediterranean culture and the traditions of folk art from third world countries”, says Carlos Newton Junior.

At the show "ARMORIAL MOVEMENT 50 YEARS OLD" came up with a bold commitment: reintroduce to the public, especially to the new generations, Ariano's unique and challenging proposal to create, just over five decades ago, an erudite art based on the most authentic and traditional popular artistic and cultural manifestations of the Northeast and other regions of the country. Designed to mark the 50th anniversary of the Armorial Movement, celebrated in October 2020, the project had its launch postponed due to the Covid-19 pandemic, and arrives in Rio de Janeiro in March after having passed through CCBB Belo Horizonte. After Rio de Janeiro, the shows ARMORIAL MOVEMENT 50 YEARS goes to the CCBBs of São Paulo and Brasília. 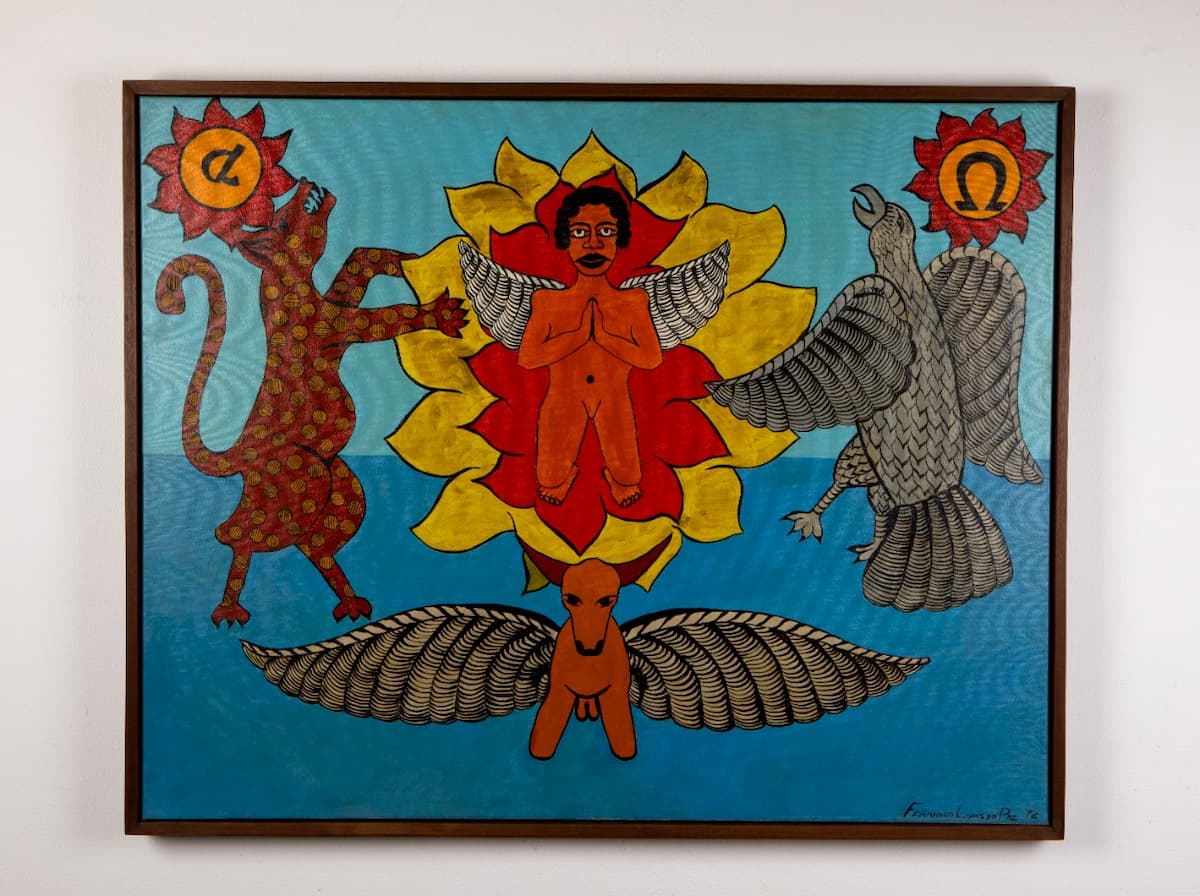 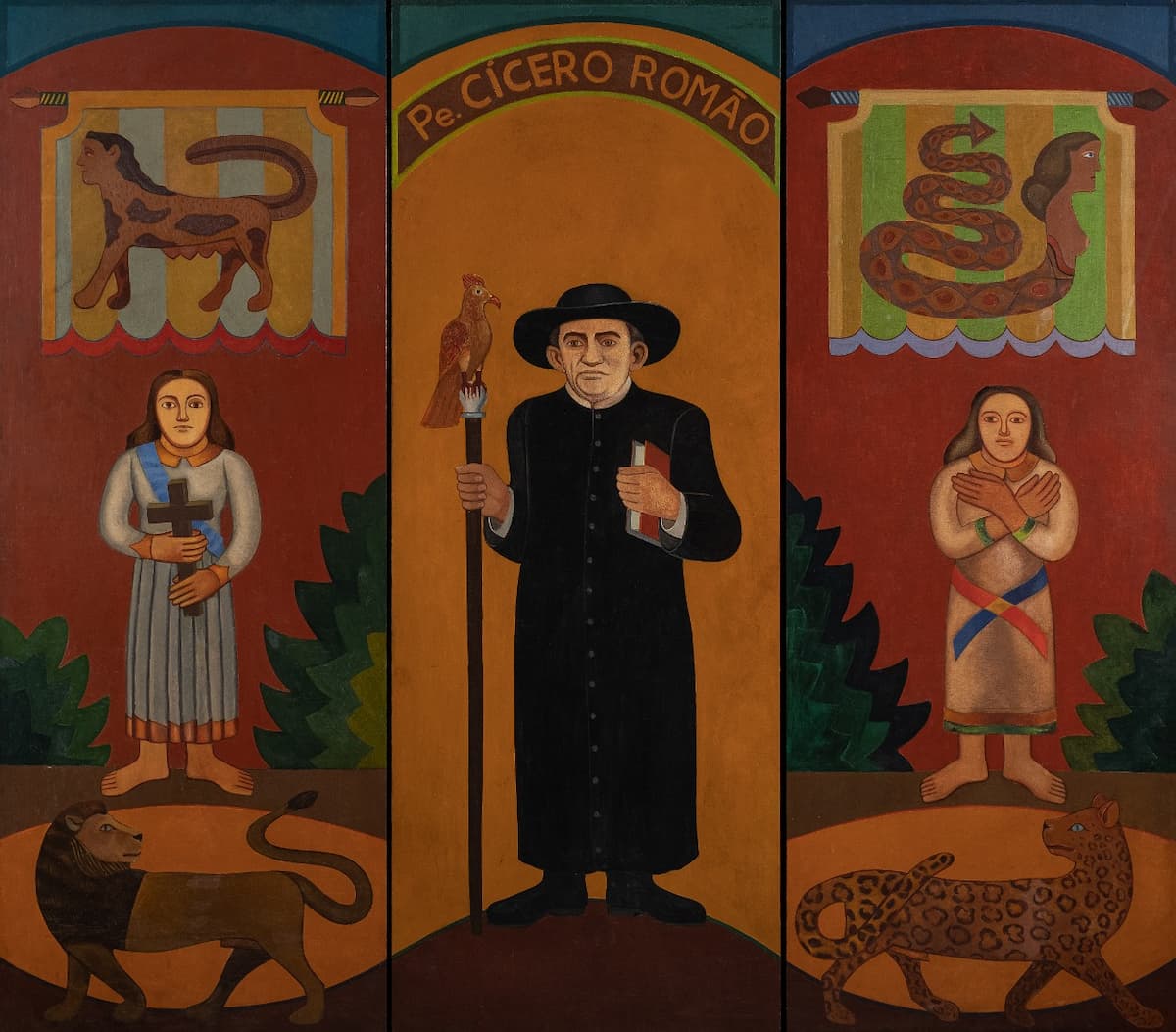 The project is from producer Regina Rosa de Godoy, director of company R. Godoy Marketing and Culture. The exhibition concept was designed by award-winning curator Denise Mattar, who did a thorough research and mining work in the Movement's vast collection to remember – with delicacy, charm and grace – the wealth of knowledge and cultural practices impregnated in Armorial art. The expography and architecture were under the responsibility of the designer Guilherme Isnard. The consultancy is provided by the plastic artist Manuel Dantas Suassuna (son of Ariano Suassuna) and poet, fictionist, essayist and professor at the Federal University of Pernambuco, Carlos Newton Junior. The visual identity is signed by Ricardo Gouveia de Melo.

From the black and white of woodcuts, passing through the multicolored ornaments and costumes of popular festivals and the choreographies of the dances. By the rhythms of the songs and the music, of fiddle sounds, fife and viola. By the sound of the verses of the strings and the singers. All paths lead to a unique experience. A cultural trail without borders, like the idea planted, behind, by Arian and that, now, arrives refreshed, little more than 50 years later, the exposure.

The exhibition is organized into nuclei, set in the rooms on the second floor of CCBB Rio de Janeiro. In each of them, an exclusive expographic treatment was defined that brings out the diversity, the traditions and the most representative roots of Northeastern popular culture, as idealized by Ariano Suassuna. And, as explained by producer Regina Rosa de Godoy, magically, playful and full of humor.

the introductory text, signed by Denise Mattar, is the first step in immersing the visitor in the fascinating universe of Armorial art. The core Ariano Suassuna, Life and work, provides a complete illustrated chronology, Author's books and manuscripts. and videos of his famous show-classes. a cultural dip, anyway, in the fertile and broad creative imagination of the master. In this step, also highlights the sertanejo alphabet, created by Ariano based on research Ferros do Cariri, a country heraldry.

in the other core, called Armorial Fase Experimental, the visitor will enter another environment full of culture and traditions. Now browsing the music, Fernando Lopes da Paz dance and visual arts. The exhibition rescues, at this time, for example, the work of the Orchestra and the Armorial Quintet, group that emerged with the Movement, in 1970, and acted until 1980, with great success, creating classical chamber music with popular influence.

the award-winning Armorial Quintet brought together renowned figures of music as members, like or master, guitarist and composer Antônio José Madureira and multi-artist Antônio Carlos Nóbrega. The group recorded four LPs, discography that the exhibition revisits with album covers, plus photos and musical instruments, to approach, melodic, the audience of the armorial universe.

In dance, all the beauty and grace of the Balé Armorial do Nordeste, pictured in photo gallery. the visitor passes, from there, to enter more intensely in the universe of the plastic arts of the Armorial, through the works of artists Aluísio Braga, Fernando Lopes da Paz, Miguel dos Santos and Lourdes Magalhães. There will be, also, the Samico Special Room, a deserved highlight that dialogues, according to the organizers of the show, with the coherence and permanence of the work of the artist Gilvan Samico (1928-2013), known for his woodcuts, lined up, until 2013, to the principles of the Armorial.

In this same space, the costumes signed by the ceramist and plastic artist from Pernambuco, Francisco Brennand, are also presented. (1927-2019) for the movie A Compadecida (1969). The costumes were made especially for the exhibition by costume designer Flávia Rossette. The production was based on the renowned Auto da Compadecida, by Ariano Suassuna, who signed the script for the film and won a remake in 2000, which helped to make the work of Ariano Suassuna known throughout Brazil.

in your next core, the exhibition presents the Second Phase of the Armorial Movement, bringing to the scene the illuminogravures (term created by Ariano which is a mixture of illumination and engraving) by Ariano Suassuna, in which the writer interacts with the plastic artist. The author produced two albums, each containing ten boards: Sonnets with an Alien Motto (1980) and Sonnets by Albano Cervonegro (1985) that together form a poetic autobiography.

Also presented in this module are the lithographs and ceramics by Zélia Suassuna, photographic panels of Ilumiaras (word created by Suassuna to determine sacred places for him) Acauhan, Jauna, Zombie, crowned (Suassuna's residence) and Kingdom Stone. This module is complemented by the Armorial Today and Forever set., with works by artists such as Manuel Dantas Suassuna and Romero de Andrade Lima. The dance is once again portrayed with photos, costumes and projections, through the Ballet Grial, created by Ariano and the dancer and choreographer Maria Paula Costa Rêgo. As well as Film and TV productions, made from the plays of Suassuna, as Farce of Good Laziness, The stone of the Kingdom, The Compadecida's Report, Perpetual Lunar.

In another module of the show: Armorial – References, the visitor will be able to contemplate the beauty of the woodcuts, signed, among others, by Masters J. Borges, Noza e Dila, and also the City of Cordel, created especially for the exhibition by Pablo Borges, son of J. Borges. It is an instagrammable space that will allow a playful journey through popular culture, with its stories and singularities. At the end of the exhibition, there are references to popular revelries, like maracatu, Reisado and the Seahorse, gathering masks, suits, banners and props.

The Movement Exhibition Armorial 50 Years follows accessibility and inclusion standards. It will have a bilingual audio guide and resources from the Musea App, exhibition-oriented content platform, which allows for better insertion in the contents, with audio description, visit in pounds, in addition to providing more information, such as curiosities and virtual visits.

Denise Mattar is one of the most awarded curators today. She held the position of technical director of cultural institutions, such as the Brazilian House Museum (1985-1987), the Museum of Modern Art of São Paulo (1987-1989) and the Museum of Modern Art of Rio de Janeiro (1990-1997). Since 1997, works as an independent curator, having received over the years four APCA awards (São Paulo Association of art critics) and two ABCA awards (Brazilian Association of Art Critics). Accepted Regina's invitation to this challenge to portray the Armorial Movement, with its fantastic animals and all its plurality.

Conceived by director Regina Rosa de Godoy, with this show mark 30 years of experience in production and 20 years of partnership with curator Denise Mattar. Specialized in holding events of special importance for Brazilian art, enables creative and transformative actions in the most diverse languages, serving expressive institutions of the segment in the country. In partnership with the CCBB, it has carried out over 15 years events in the areas of Dance, Music, Teatro, lectures on Philosophy and Art and art exhibitions.