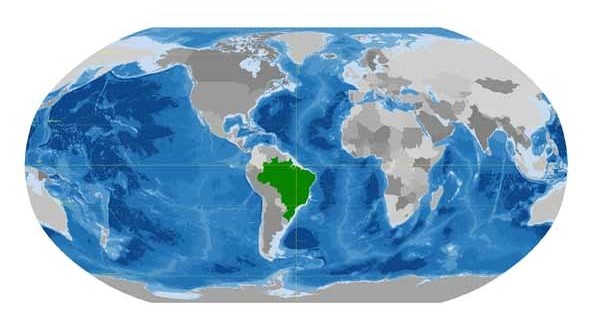 World map in commemoration of the 2nd Centenary of Independence 2022. Printed. 100x150cm. Paulo Protasio's Collection – Brazil. celebrating 200 Brazil's years as an independent nation, we produced this world map with Brazil in the center. The idea is to bring greater clarity to our position in the world and encourage us to realize our own protagonism.. The self-centered position allows us to visualize the resonance field of our actions in the world and, also, understand the forces that affect us. Another effect is to present us with the three oceans in their entirety.. The realization that we are surrounded by oceans, not only gives us the dimension of our possibility of communication with all continents and all nations, but also invites us to take responsible action with this environment that is the cradle of life on Earth. The production of this map had the support of the 5th Geoinformation Center of the Brazilian Army.

Open to the public in the month of the discovery of Brazil, the exhibition brings a series of gems of cartography, as the first map of the Brazilian coast, still called Vera Cruz.

“Geography cannot be underestimated. It brings with clarity the reason of our history – past, present and future. The environmental issue brings the dimension of interdependence and a look beyond borders. It is necessary to show that we are part of a relationship that is not only Atlantic. The old world looks at us like a new world. it's our turn!” Paulo Protásio, Curator of the exhibition

Brazil No [center of] Map

Celebrating the 200th anniversary of independence and the 30th anniversary of the Rio-92, the first global meeting that brought together government and society in the face of the environmental challenge, it is necessary to revisit the world and the South American continent in the face of the physical reality that sustains the country's national and international policy. Brazil is at the center of the world and with it South America. To motivate this reflection, the Centro Cultural Banco do Brazil Rio de Janeiro (CCBB-RJ) inaugurates day 20 April to exhibition Brasil in [center of] Map, and presents a series of gems of cartography. Are 22 maps, from the 16th century to today, including Brazil in the center of the world map. The exhibition also features four thematic maps: CO2 emission per inhabitant, plastic waste, conservation units and renewable energies. Another highlight of the exhibition is “Cartography of Anna Bella Geiger”, segment of the show that features an unpublished video and three works from the cartography series (two engravings and an object box) artist.

Influenced by her marriage to renowned Brazilian geographer Pedro Geiger, Anna Bella Geiger developed a unique work with maps, for which it is known around the world. And I couldn't miss this exhibition that offers the viewer so many rarities of cartography. “Based on the 'ingredients' common to all maps such as projection, scale, generalization, look, or through the deliberate use of misstatements, or by text insertions, obtain meanings whose result is different from the common use of the map. Intinciono with this create a representative space (bracket), for a reflection on the art system and its circuit, more specifically in our context. The map determines the location of the action. I have most often used two representations, that of cartograms of contiguous areas – topological maps, and the traditional Mercator projection. The chosen territories are the world (Map-Mundi), Latin America and Brazil. The information process of this work depends on, for its effectiveness, of an effort between the reader and the author, it means, the active role of both parties”, contextualizes the artist.

Curated by Paulo Manoel Lenz Cesar Protasio and consulting by geographer André Alvarenga, Brasil in [center of] Map brings treasures of cartography, as Rogerian card, which marks the transition period between the phase in which the Mediterranean was dominated by Muslims and the resumption by European Christians, the Ebstorf Map, the largest map of the medieval period that has the Orient at the top. It has the body of Christ on the cross like a Rose of the Winds (pointing north directions, on the, East and West). The map features biblical scenes and has Jerusalem in the center. The exhibition also highlights the Genoese map who, shaped like Noah's Ark, marks the end of the medieval period and entry into the Renaissance. He is one of the first to point out the possibility of reaching the Indies through the contours of Africa. A Map of Johannes Schnitzer, a copy of the rediscovery of Ptolemy's Geographia (director of the Library of Alexandria in the century 2 d.C.), is another gem that the exhibition will set. Ptolemy's book was a guide on how to reference locations on earth by the stars in the sky and also a guide for producing different projections.. 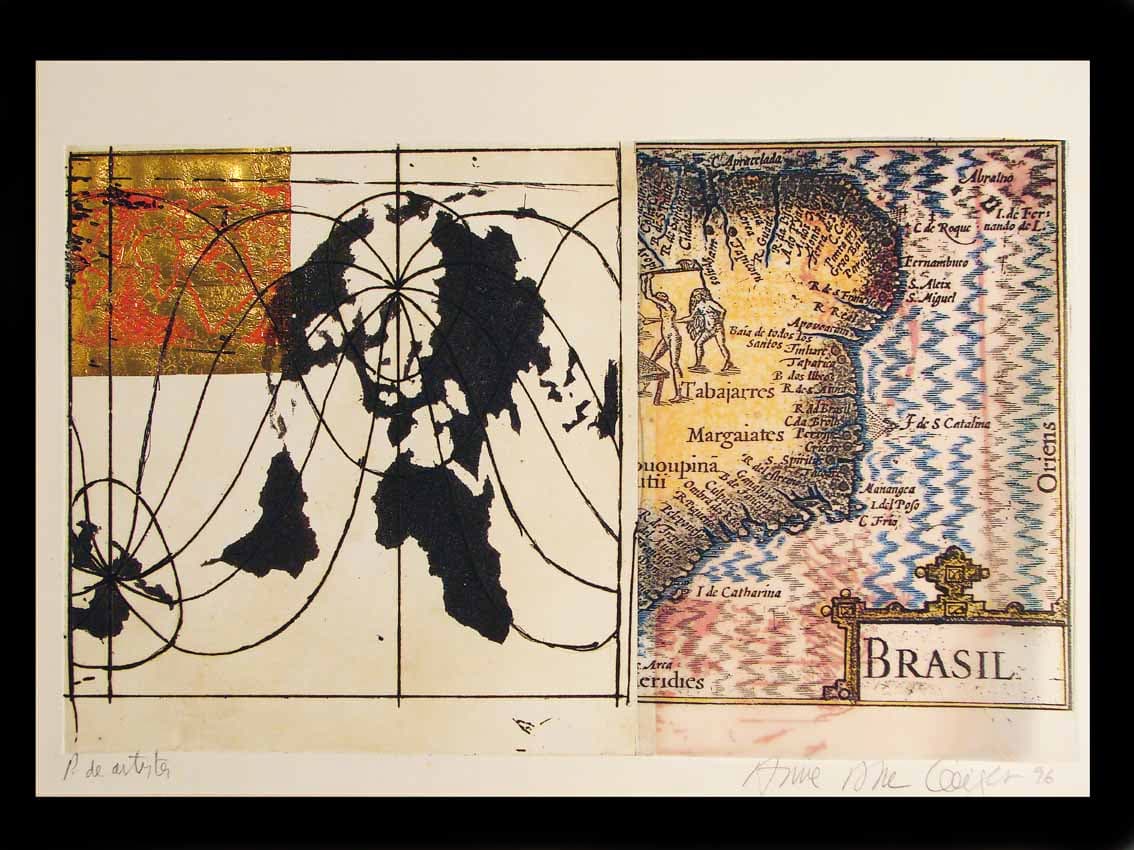 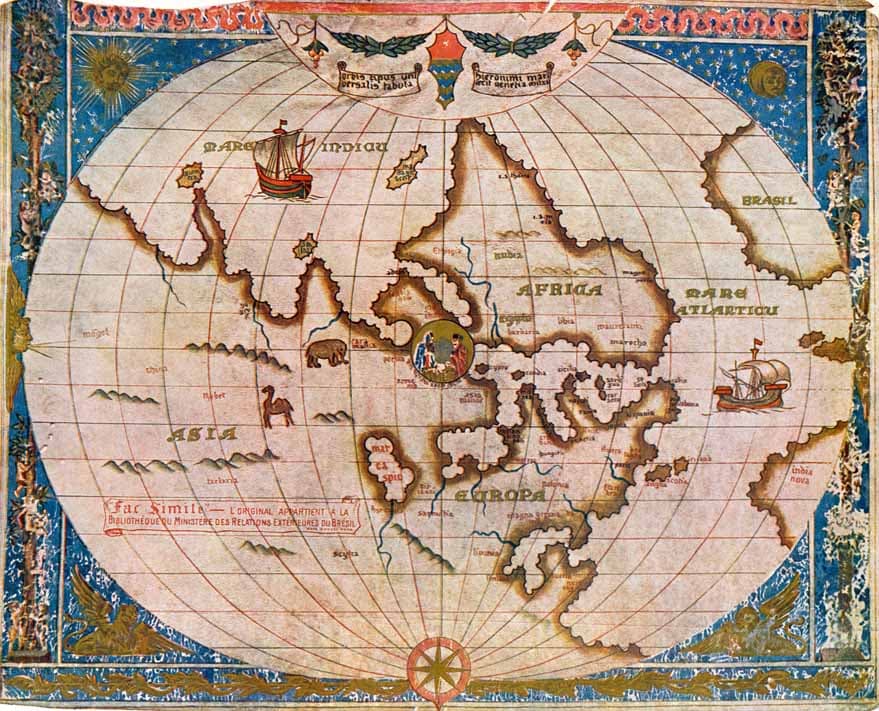 Disk Type of Universal Map, Jerome Marini, 1512. Mapoteca Collection of the Ministry of Foreign Affairs. Produced by Jeronimo Marini, is the first map on which the name “Brazil” appears to designate Portuguese lands in the Americas. It is oriented towards the south and has Jerusalem, with the nativity scene, in the center of the world. North America is identified as New India. The information that Columbus had not arrived in the Indies took a few decades to consolidate.. The map was made in Venice and acquired by Minister Lauro Müller, in 1912, at an auction in Rome.

The exhibition that opens at CCBB RJ on the eve of the day in which the discovery of Brazil is celebrated, presents the Planisphere of Juan de la Cosa, the first map to show the American continent. Its creator traveled with Christopher Columbus. It also highlights the Map of Alberto Cantino, from 1502, the first to show the Brazilian coast, call on the map of Vera Cruz. The map made by the Portuguese cartographer was smuggled by an Italian pirate. The viewer will also get to know the Map of Jeronimo Marini, from 1511, the first to bring the name Brazil, the Terra Brasilis, by Lopo Homem and Antonio de Holanda, from 1519, which shows a complete delineation of the Brazilian coast, presents the mouth of the River Plate and represents the Indians cutting wood (redwood), and many other rarities.

The cartography seems too complex and aimed at specialists, but this is a big mistake. The exhibition that remains at CCBB RJ until 30 June confirms that its benchmarks are essential for practically all areas. From handmade maps to current technological systems, the need to know about cartography is more than interesting, it is necessary.

It will also be part of the exhibition program Brasil in [center of] Map a three-day seminar on the rich topic. 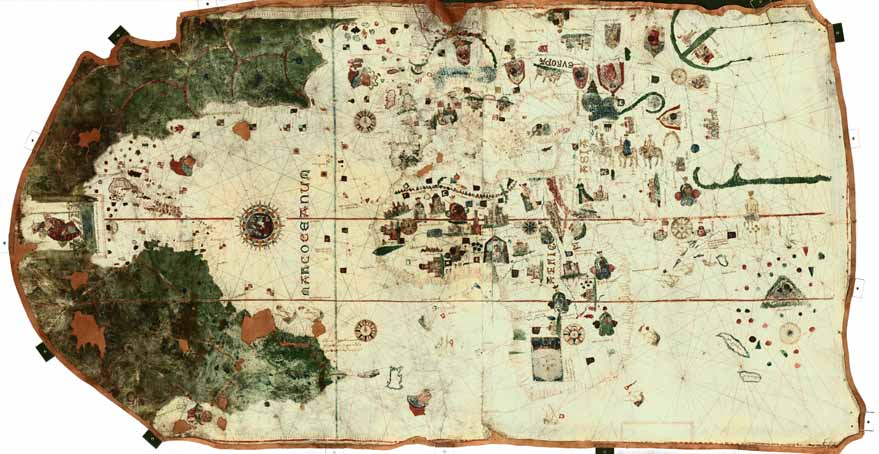 The Universal Charter of Juan de la Cosa, 1500. manuscript on parchment. 93x183cm. Naval Museum of Madrid – Spain. This portolan represents the advance of European navigations until the year of 1500. It is the first known map to represent the Americas.. La Cosa accompanied Christopher Columbus on his first two voyages. As for the best outline of the African continent, although it was known about Vasco da Gama's first trip to India (1497-99), Cosa did not know his results, based solely on the travels of Bartolomeu Dias.

Carta de Cantino, 1502. manuscript on parchment. 220x105cm. Library of Modena – Italy. of Portuguese origin, this portulan was smuggled by Alberto Cantino to the Eastern Court, Italy. It is the first map to present the Brazilian territory. The east coast of Africa and India take a more accurate contour. Jerusalem is at the center. The representation of parrots in Brazilian lands has become a recurring iconography. at the foot of the parrot, in the Porto Seguro region, the toponym Rio de Brazil can be read. Just ahead is the official name: Vera Cruz.

Brasil in [center of] Map

26 maps and “Cartography of Anna Bella Geiger” (an unreleased video, two prints and an object box by the artist)

No need to withdraw entry

For more info: Public entry is only allowed with proof of vaccination against COVID-19 and use of a mask. .

Public entry is only allowed with proof of vaccination against COVID-19 and use of a mask.: www.eventim.com.br

Previous: Guest series at the Ema Klabin House Museum features work by Flora Rebollo
Next: THE ART OF COLLECTING III | LEGACY IN ART