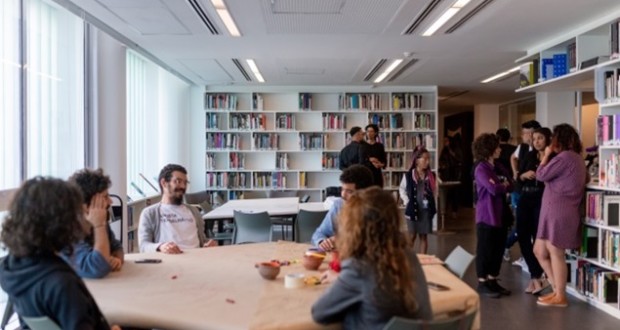 Next Tuesday, 10 of december, Rio Art Museum Library, under the management of the Institute Odeon, It will be occupied by a series of activities marking the launch of projects and books developed 2019 the School of the Look. Among them is the Technology Center of projects SEA Assistive – NETC_a, integrated by researchers, artists, educators and curators, focusing on accessibility. Developed with financial support from BNDES, from experimental methodologies, these projects aim to produce innovative and exciting experiences in the field of assistive technologies.

The book "artistic and pedagogical devices" will be released with a conversation wheel mediated by educators from various museums and cultural centers and activations with the devices in the SEA spaces. After the conversation, MAR educators conduct activities and interventions inside and outside the exhibition hall using the devices focused on the book.

Already the digital publication "Mario Pedrosa Current" will be the subject of discussion at a round table integrated by authors and organizers. There will also be distributing the book "Mario Pedrosa: primary texts”, published by MoMA in 2016.

#OcupaBibliotecaMAR all programming will be free and free for all ages.

Talk wheel Mediation Objects + Activation of the devices in exhibitions and circulation spaces.

Result of collective research on the educational practices of the School Look, focusing on mediation objects developed by the SEA educators, the publication aims to share the research processes and elaboration of the devices, and dividing uses of experience reports and appropriations to the different public museum. Presents an unprecedented way the reflection of educators on their work process and includes images and texts of the organizers also. On the occasion will be distributed 100 copies of the book in order of arrival.

Mediation objects are developed in different formats, for various purposes, and they are used in different contexts: schools, museums, cultural spaces, in cultural processes, clinical and educational. The conversation wheel aims to explore the universe of possibilities from the speech of educators from different museums and cultural spaces of the city. After the conversation, throughout the afternoon, the MAR educators will conduct educational activities and interventions inside and outside the exhibition hall using the devices focused on the book.

The Experimental Center for Assistive Technologies – Netec_a aims to propose artistic and educational experiences that expand the possibilities for inclusion of people with disabilities and deaf people at the museum in order to promote their integration in the areas of cultural and sociability in general. Developed from two residences built by researchers, artists, educators and curators, focusing on the area of ​​accessibility, the Center has developed new tactile Models, Content in audio and audio description, plus Contents Video Pounds, from experimental methodologies aimed at producing innovative and exciting experiences in the field of assistive technologies. pilot project sponsored by the BNDES, The core actions include training on accessibility for teams SEA, Pounds and of course also open to diverse audiences. There will be presentation of projects by core members, as well as mediated visits in which the audience can experience the content developed by groups.

Discussion with the authors of the book due course Mario current Pedrosa, conducted by the School Look the first half of 2019. The course had the participation of important Brazilian and foreign researchers and led to an unprecedented document, with more than 500 pages, giving to see the critical work, curators, teachers and researchers in order to discuss the legacy of this author and his current. It is divided into three sessions: Politics and Art – trajectory and intellectual formation of Mario Pedrosa; modernity criticism – another project for the modern Brazil; museum imagination and postmodernity, as well as the course. It has Quito Pedrosa texts, Aracy Amaral, Dainis Karepovs, Marcelo Ribeiro, Tarcila Ant, Glaucia Villas Boas, Catherine Bompuis, Martha D’Angelo, William Wisnik, Izabela Pucu, Sabrina Parracho, Claudia Zaldivar, Patricia Correa and Pollyanna Quintella. It will be distributed free through digital and can be downloaded in the SEA site. There will also be distributing the book "Mario Pedrosa: primary texts”, published by MoMA in 2016.