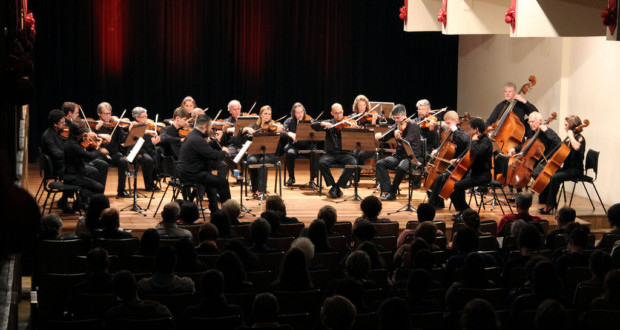 The Chamber Orchestra of the City of Curitiba prepares the first concert of the year in the season 2018 the Camerata Antiqua of Curitiba. 'Between Italy and Germany Baroque' is the theme of the presentation that takes place this Friday (6/4) at 8:00 pm and Saturday(7/4) às 18h30, in the chapel Santa Maria Cultural Space.

The season 2018 the Camerata Antiqua de Curitiba will be divided into 34 concertos, between the whole group, with the choir and the orchestra and chorus or orchestra specifically. In addition to opening, stand out important works of Johann Sebastian Bach repertoire, Motets and closing the season with the Christmas Oratorio.

In the Orchestra's programming, They are provided for major concerts, as participation in the Festival Cara Mia Curitiba, where will perform great Italian composers masters, as well as other programs with universal composers like Haydn, Mozart, Villa-lobos.

It also highlights the concert with Baroque dance in September, "King Dance", as composers of the court of Louis XIII and XIV, and dancers with original century choreography.

Fernando Cordella is considered one of the main harpsichordists of his generation in Latin America. In 2015 has received, in São Paulo, JCI TOYP Brazil the prize as the most significant figure in Brazil the year, in the "Cultural Success".

In 2016, He took full professor office and coordinator of Baroque Music Workshop of the School of Music of São Paulo - EMMSP, linked to the Municipal Theater of São Paulo. It has strongly acted as soloist and guest conductor in major orchestras in Brazil. Cordella is also artistic director and principal conductor of the Symphony Orchestra of Carazinho and Bach Society Porto Alegre.

Previous: Account “Start in Antofalla – Chile – Second part” by Edmundo Cavalcanti
Next: Serenade for Curitiba combines music, dance and the landscape of the Park Tanguá