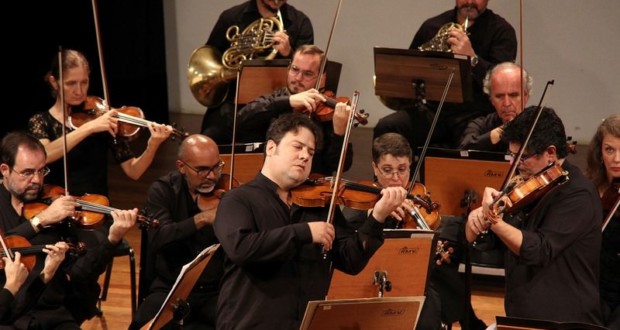 Performances of the Chamber Orchestra of Curitiba. Photo: Alice Rodrigues.

The chapel Santa Maria Cultural Space receives, This weekend, the last concert of the season 2015 the Chamber Orchestra of Curitiba. The musical direction will be will be the violinist Wiston Ramalho, Alexandre Razera as soloist (Viola), both members of the Camerata Antiqua of Curitiba. The presentations have sponsorship from Volvo and happen to Friday 8:00 pm (20) and at 6:30 pm on Saturday (21).

The directory allows you to show the public the virtuosity of the violist Alexandre Razera. In Brazil, Razera served as violist of the Orquestra Sinfônica do Estado de São Paulo (OSESP), Experimental Repertory Orchestra, and viola solo of the Symphony Orchestra of the University of São Paulo (OSUSP). Being the first violist of the Orchestra of radio-television Slovenia Ljubljana and guest musician of the Mahler Chamber Orchestra, since 2008.

Another Member of the Camerata Antiqua of Curitiba, the violinist Wiston Ramalho, responsible for the musical direction and Regency of the show. The instrumentalist was a member and guest violinist Grazer Synphonishes Orchester, Recreation Orchester Graz, The Vienna Philharmonic Orchestra, The Vienna Chamber Orchestra and of the symphony orchestras of Paraná and São Paulo.

In 2008, Ramalho was the artistic director of the International Concert series, in the monastery of St. Benedict and, the following year, he curated the international concert series “Classics classics”, held at the Cultural Union Brazil-USA. In 2011, collects performances as chamber musician in concert series Oscar Americano Foundation, in São Paulo, In addition to concerts at the Cultural Center of São Paulo, Positive Theatre, Chapel Santa Maria and in the 31 Music Festival London. Being from 2014 is concertmaster and artistic director of the Camerata Antiqua of Curitiba and the Chamber Orchestra of the city of Curitiba.

Previous: Production and illustration of sketchbook are theme of workshop at Sesc Sorocaba
Next: Musical performances celebrate the Day of black consciousness in the Largo da Ordem