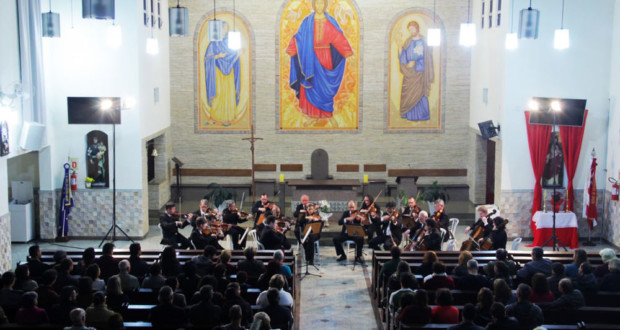 The sanctuary of Santa Rita de Cássia, in the neighborhood Hauer, receives the Camerata Antiqua of Curitiba on Thursday (day 1), to 20 hours, for concert open to the public. The presentation of classical works of various periods. will be performed by the group under the direction of principal and assayer, Alexandre Razera.

The Repertoire of this concert also reflects the characteristic and the musical proposal of the project being a history of foreign and Brazilian composers, representative in his time, such as: Johann Sebastian Bach, George Friedrich Händel, Heitor Villa-lobos, Antônio Carlos Gomes, Mozart Camargo Guarnieri and Edmund Villani-Côrtes.

For this year are still provided for three more concerts in churches of Curitiba: Holy Spirit parish, Shrine of our Lady of Guadalupe and the Redeemer Community.

A native of Piracicaba, He began his musical studies in the Escola de Música de Piracicaba. In Brazil he studied with Celia and Elisa Fukuda. In 1998 was awarded with a scholarship to integrate the Academy Karajan of the Berlin Philharmonic, where had the guidance of Wielfried Strehle. Held concerts and recordings under the baton of conductors such as Claudio Abbado, Simon Ratle, Daniel Baremboim and Lorin Maazel. He studied with Ulrich Knoerzer at Berlin University of the arts. He served as first violist of numerous orchestras, as radio and Television Orchestra Eslovêna, OSESP, OSUSP and OSB. Worked by the Lucerne Festival Orchestra, Berlin Philharmonic, Mahler Chamber Orchestra and various camera music groups around Europe. Integrates the Faculty of festivals all over the country, as the Festival of Campos do Jordão, Music workshop of Curitiba, CIVEBRA (Brasilia) and FEIMEP (Piracicaba). Currently, In addition to the solística and chamber music activity by Brazil and abroad, is first violist and Orchestra of Camera tester of Curitiba.