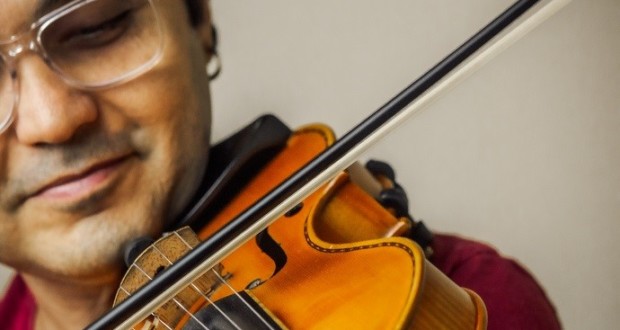 A cultural initiative “Violin in Choro”, starring violinist Felipe Karam, aims at the promotion and diffusion of genuinely Brazilian music

Throughout its history, the violinist and composer Felipe Karam has been claiming the use of the violin in Brazilian popular music. Such a search, made him travel the world, performing on different stages, with musicians from different cultures and styles, like UK, Europe, Middle East and even in the Amazon, where he lived a unique experience with the group Brazilian Ensamble, teaching Brazilian music classes to riverside communities. From from 24 February, the gaucho musician starts a new challenge: Bring the study of Brazilian popular music to youth orchestras in four municipalities in the state of Rio Grande do Sul. With the financing of the Aldir Blanc Law, young people from the cities of Caxias do Sul, Novo Hamburgo, Montenegro and Porto Alegre will receive training actions for the project Violin in Choro – Promotion and Dissemination of Genuinely Brazilian Music, carried out with resources from Law no. 14.017/2020.

The project Violin in Choro consists of the production and execution of workshops, masterclasses, and didactic concerts, of Brazilian music, crying as the main genre, considered the “classic brazilian” for its historical context, rhythmic diversity and virtuosity. All activities are taught by Felipe Karam, five-string violinist, formed by City University London, in London-UK, with a Masters in Performance and deep research and experience in the language of choro and jazz.

According to Felipe Karam, the main objective of the project is to fill a gap observed in the training of friction string players, more precisely from the violin family, basic knowledge, harmonics and rhythms present, unequivocally, in Brazilian popular music. “I seek to instill in the student an interest in delving into these contents, celebrating the Brazilian musical identity, as cultural heritage”.

Karam recalls that, historically, the violin has been seen as an orchestral instrument, associated with concert music. However, the musician and composer claims that there is no barrier to music or an instrument. “Both of them, are at the service of the creative act and for this there are no limits”, declares.

A Workshop “Violin also gives” will be offered to members of young orchestras and / or social music projects and will benefit, directly, around 120 students from four cities Rio Grande do Sul. From Caxias do Sul, the Mais Música project will be awarded, Marcopollo Foundation; the Montenegro, students from the Municipal Foundation of Arts will benefit (Fundarte); from Novo Hamburgo, the Novo Hamburgo Youth Orchestra Center (Secult), and in Porto Alegre, to Villa-Lobos Orchestra, of the Municipal School Heitor Villa Lobos, and students of Music courses at the Federal University of Rio Grande do Sul (Ufrgs). Check dates on “Service”.

Advanced students and even professional musicians, operating in different areas, will have the opportunity to receive guidance from Felipe Karam,individually, through the masterclass “Brazilian Soul”. The opportunity will be directed exclusively to violinists, violists and cellists in standards of Brazilian popular music, from the offer of pre-established scores by the lecturer on the project website and via registration. The musician notes that the masterclasses are often a common activity for friction string players. “Will be offered individually to the soloist, in order to drive you to your best performance, in a musical performance, and differentiate, for addressing rhythmic and harmonic issues, common to popular musicians”, explains. This activity takes place in parallel with the workshop “Violin also gives”, at times to be agreed and has five places per city.

Crowning the formative activities, four editions of the Didactic Concert “See if you like”, open to the public, which will be broadcast live on the artist's digital platforms (facebook e youtube). Formed by Felipe Karam to the five-string violin, Max Garcia on guitar, Miguel Tejera on bass and Dani Vargas on drums, the instrumental quartet will present varied themes from the national repertoire, contemplating great exponents of Brazilian music, like Djavan and Dorival Caymmi, and will present copyright songs of Brazilian origin, how I cry, Samba, ijexá and baião. The didactic concert will offer musical orientations and peculiarities about the Brazilian musical identity, its history and rhythmic diversity. The title “See if you like” makes reference to a Brazilian choro by Waldir Azevedo and proposes to celebrate the workshop and the masterclasses.

The project has practices aimed at people with disabilities (PCD´s) and provides accessibility actions like captions, pounds and audio description. All the activities are free. To democratize access even more, four 360º films and 3D audio will be shot. This feature will provide immersive audio and experience, since, unlike conventional video, the 360º video serves people who, due to the covid-19 pandemic, cannot be in the event in person.

Workshop participants, booklets will be delivered, for free, containing didactic material about the Brazilian musical identity. The purpose is to guide students on the content provided in the activities.

Born in Porto Alegre, Felipe Karam holds a bachelor's degree in violin from UFRGS (2002) and master in Music Performance pela City University London (Londres-UK 2012), under the guidance of Cuban violinist Omar Puentes. Its trajectory begins in 1998, with Café Acústico, group awarded by the Açorianos Award (Best MPB Group – 1999 and 2000) and winner of the Porto Alegre Music Festival. From 2004, starts his international career, dividing itself between Brazil, England and the United States. The most prominent formations were Pocket – Caravan (3 records and tours in Europe), Caratinga Group of Choro and Samba (1 disc, Press Award-UK 2011 – Best Brazilian Music CD) and the trio Brazilian Ensemble (Funarte Didactic Concerts Award 2012), that through the institution Live Music Now, for six years, performed over 60 concerts a year, passing through United Kingdom, Middle East and Brazilian Amazon. International musician, long experience, already shared stage with Shanghai, Renato Borghetti, Miltinho Edilberto, Samuca do Accordeon, Chagas boy, Just To Counter, Pedrinho Figueiredo and Others. As a trainer, in 2016, was accepted by the teacher exchange program (bag Fulbright Scholar in Residence Award), by which he taught the discipline “History and Appreciation of Latin American Music” at the NVCC Music Department, in Waterbury, Connecticut, USA. In Porto Alegre, integrated Camerata Pampeana with Maestro Tasso Bangel (DVD “Alma Farroupilha”), Trio Surdina Pampeano with Samuca do Acordeon and Choro do Pampa with Rafael Ferrari. In 2018 released his first solo album, “From Sun to Sun”, in which you get, composes and interprets, Brazilian and international music genres and rhythms, to the five-string violin, peculiar fact in Brazilian discography. “From Sun to Sun” received two nominations for the Azorean Music Award (Best Composer and Interpreter in the Instrumental Category) and was selected for FEMUCIC 2019, with the frevo of authorship, that gives the disc its name.