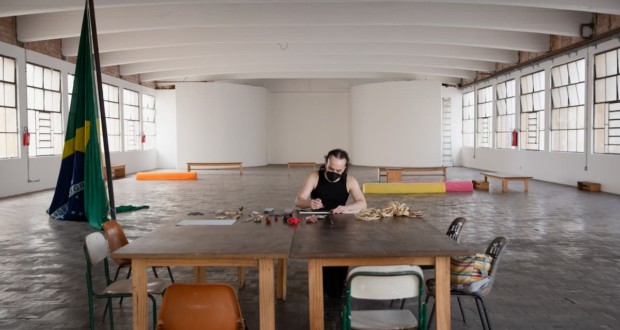 Artists Daniel Lie and Regina Dabdab sign the 30 works from the series in an unpublished collab. Amounts raised from the sale will be used to renovate the Cultural Space building located in Bom Retiro

Exclusively for SP-Arte, which happens to 6 to 10 April at the Bienal Pavilion, in Ibirapuera Park, to House of the people launches an unprecedented collaboration between internationally renowned artists Daniel Lie and Regina Dabdab. With 30 works, the series “Comum Presença” resumes the fundraising effort to renovate the building of the Cultural space, about to complete 70 years, and thus enhance its activities and continue forming communities.

What is the minimum element needed to evoke the whole? What are stories made of?? where the memories live? Daniel Lie has worked at Casa do Povo, had a studio at the institution, and created works site-specific that investigated the relationship between the histories of space and its inhabitants – humans and beyond-humans. After a few years living abroad, came to visit the House again, and, walking through the floors, went to meet the fragments that could encapsulate their affective memories of this territory.

These are the scattered elements, loaded with subjectivity, that landed on Regina Dabdab's table, on the other hand, combined them with other elements – crystals, Woods, pearls and corals. From listening to every fragment, characteristic of your practice, testing fittings, attractions, aversions and affinities, the artist was creating new agencies and, and, new objects.

“It was exciting to receive the memories and affections that Daniel Lie found at Casa do Povo, be able to rethink them and recombine them, creating enchanted objects for another time, with new signifiers and meanings”, Regina account.

an amulet. because luck is needed

Between jewelry and sculpture, these undefined objects continue in displacement. When acquired at SP-Arte, begin to circulate to other places and with other bodies, at the same time as they generate financial resources that will be fully applied to a construction fund whose objective is precisely to take care of Casa do Povo. “This meeting is very special because it is a partnership in favor of a third thing. It's a triple: My God and my Glory, Regina and the People's House”, says Daniel Lie.

To Benjamin Seroussi, Executive Director of Casa do Povo, an amulet's strength comes from the elements it gathers and carries. “The Common Presence series, name of a book of poems by René Char, is a way of talking about presences, of being together, the ordinary. The project is the result of the collaboration of Regina and Daniel and, in a very concrete way, makes a piece of the world go round: from Casa do Povo to Casa do Povo. It is this wheel that the amulets incorporate that give them unique power – inhabited by different times., other people's affections, past stories and collectively dreamed futures”, He explains.

To participate in SP-Arte, Casa do Povo counts on the valuable support of institutional partners, like Casa Teo, who lent his furniture and objects in the assembly of a stand that refers to a cabinet of curiosities and the Casa Triângulo, gallery representing the work of Daniel Lie, and provided institutional and publicity support for the expansion of this action to its public.

Indonesian-Pernambucan artist, transgênere, was born in São Paulo and currently lives a nomadic process. In your work, time is the central pillar of reflection. From the oldest and most affective memory – bringing family and personal stories – until the time of things in the world; the span of a lifetime, and the duration of the states of the elements. through facilities, objects and hybridization of art languages, uses things as they are and bases the work on concepts related to performance art – a time-based art, ephemerality and presence. To highlight these three instances, elements that have time contained within them are used as decaying matter, plant growth, fungi and the body. In your research, the look is turned to tensions and attempts to break the binarities between science and religion, ancestry and present, death and Life.

Brazilian artist, born in São Paulo, Brasil. Graduated in fashion design at FASM and specialized in accessories in Milan and in jewelery at Studio Berçot in Paris where she lived for 13 years. Dabdab's influences are the Amazonian flora and fauna, the concrete architecture of São Paulo and also the aesthetics of the Natural History Museums. Taking the organic forms of nature as their main inspiration, combines and harmonizes his sophisticated works between semi-precious minerals, Corsican sea wood, bones, coral, seeds and bronze sculptures. Exhibited pieces in the course of Contemporary Jewelry, Jewelery in Paris route between 2014 and 2016. Worked in scenography and art direction for the Salon Première Classe in Paris, Tuilleries Garden in 2015 and 2016. He collaborated with fashion brands in Brazil such as Alexandre Herchcovitch, beautiful Maria, Ellus, Fit, Reinaldo Lourenço and Forum. His works are present in jewelry stores and galleries in cities like Paris., Milan, Tokyo, New York, Los Angeles, London, Athenas, Brussels, Antwerp and Berlin.

About the House of the People

Cultural center that revisits and reinvents notions of culture, community and memory. Founded from a non-profit cultural association right after World War II, in 1946, the Casa do Povo was built by the collective effort of a portion of the Jewish community then called "progressive", from Eastern Europe, politically engaged and mostly installed in the neighborhood of Bom Retiro. Inhabited by a dozen groups, movements and collectives, some decades ago and others more recent, Casa do Povo acts in the expanded field of culture. Your transdisciplinary programming, procedural and engaged understands art as a critical tool within a process of social transformation. No fixed schedule and flexible hours, Casa do Povo adapts to the needs of each project, in order to meet both neighborhood associations and out-of-standard artistic proposals. Your work axes (memory, collective and engaged practices, dialogue and involvement with their surroundings) are thought from the contemporary context in direct relation to its historical premises, Jewish and Humanists. In this endeavor, the audience is not targeted, but active participant that, besides visiting, also proposes activities making the space a meeting place, of training and experimentation: a living monument, a place to remember is to act.