Arthur Bishop of Rosario and Sena – Penelope by Rosangela Vig

Arthur Bishop of Rosario and Sena – Penelope
by Rosângela Vig

God wants man dreams of, the work is born.
God willed that the Earth was a whole,
The sea unites, no longer part. Was you,
And uncovering the foam.
(PESSOA, 2006, p. 67) 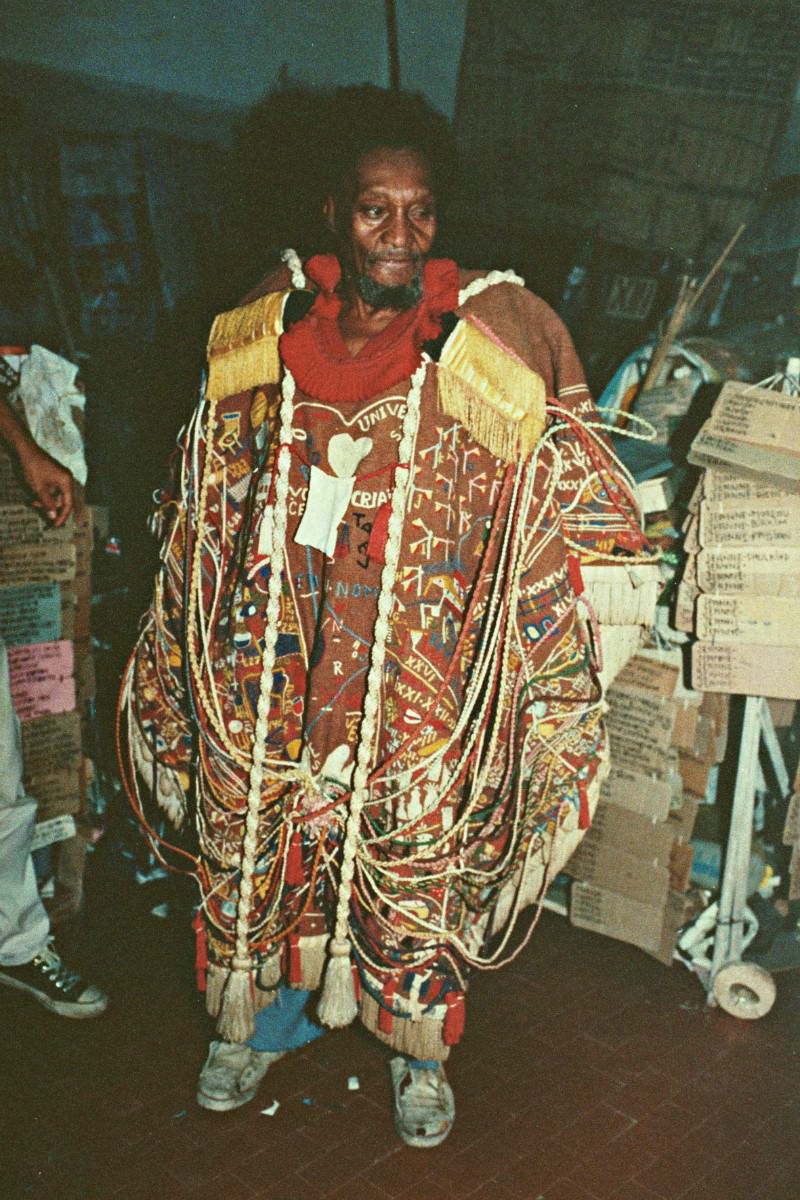 Fig. 1 -Arthur Bishop of the Rosary with your robe. Photo: Walter company name.

Maybe it's the art the fruit of an epiphany or maybe she's the boldness of a reverie, eager to take flight and to perpetuate its existence. And maybe these the paths of dreams of Arthur Bispo do Rosário 1, 2 (1909 or 1911-1989) who, for many years, silently, wove experiences, you wait, Whispers, emancipated of patterns, following only the look of the soul. His artistic practice was free, and remember too waiting for Penelope 3, in his endless spinning weft, permeated with patience, in the monastery of his thought.

Born in Japaratuba, Sergipe, City where never returned, Bishop, as it was known, moved, in 1926, to Rio de Janeiro; he enlisted in the Navy; and passed the Boxer and bodyguard professions. In January 1939, After a mystical delirium, He was diagnosed with schizophrenia and was so, by 50 years, interned in psychiatric hospitals, including, the colony Juliano Moreira, in Rio de Janeiro, where he lived during 40 years, alternating between exits and stays. In his definitive admission, the space of the institution turned into his Studio, where he created most of his 804 works, transformed, After his death, in historic heritage, in 1992 by INEPAC (RJ). 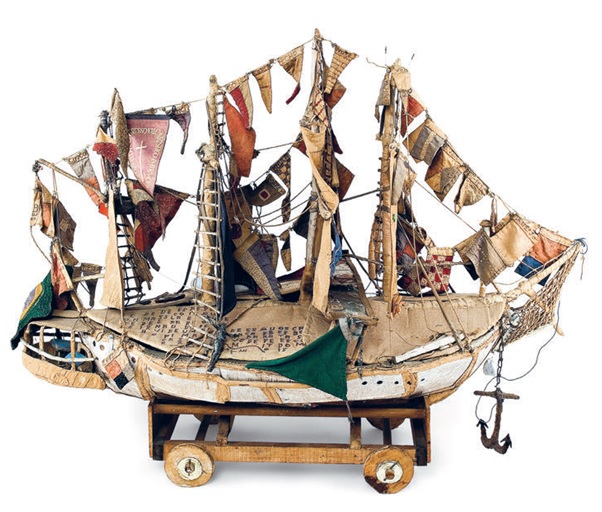 In his hallucinations, hearing voices that you talked about regenerating mission of his art; and you incubiram the mission to record what was on Earth. Thus, from rudimentary materials and simple, Bishop created thumbnails and catalogued objects, a kind of inventory to the day of judgment. On this day, use the mantle (Fig. 1), with which to introduce God, as a representative of men. In dress up, embroidered the names of people I knew, for God to remember and to intercede for them.

The ephemeral and transient passed through your hands, in a kind of ressignification material. Objects of daily use of the colony, as mugs, bottles, spoons, boxes and even shoes, served him as raw material for their work. He organized, did compositions and overlays, How to reclassify their concepts. Your embroidery, in sheets and clothes, were made from wires that acquired, reeling off their internal uniforms. From the voices I heard, recorded in the tissues, patiently, names of places, names of people, News and Biblical passages. Among his plays, There are banners, tracks and thumbnails. While poverty and mental problems the excluded, was in the cloister of your thinking, that his art, authentic, entered as a material and spiritual reorganization process. About your work,

The way instigates and affects the spirit, with impressions and uncomfortable sensations. It is an invitation to reflection, the deep penetration in their truth because it transcends the temporality of the mere appear. Intelligence doesn't seduce, because tries to convince. Bishop's work is an act of will. Without reflecting the beauty easy, invites to know. (SILVA, 2003, p. 107) 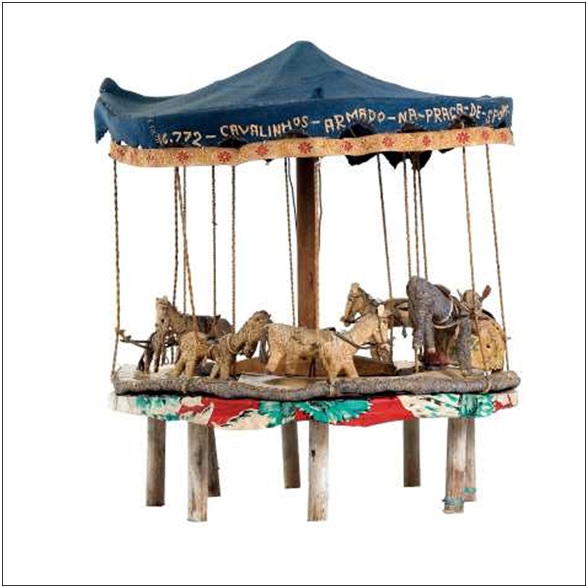 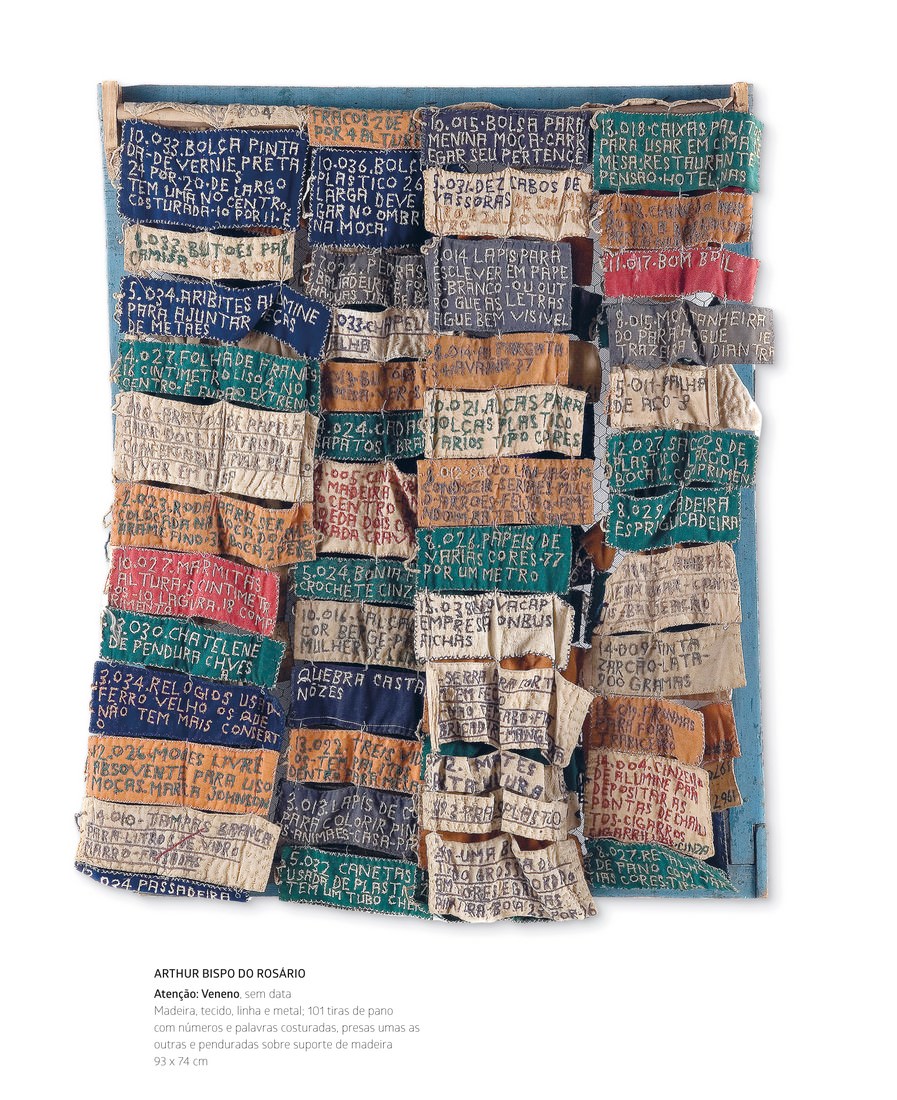 Your concern was addressed in avant-garde aesthetics, from 1960. Its significance has gone beyond the artistic production, the images of the unconscious and brought up the idea of occupational therapy, unimaginable practice, for the period. The appreciation of the work of Bishop coincided with new theories about the madness, in 1980, and his works have joined the art circuits. In 1995, several pieces of the artist represented the Brazil, at the Venice Biennale, getting international recognition. Currently his work is a reference for contemporary art. 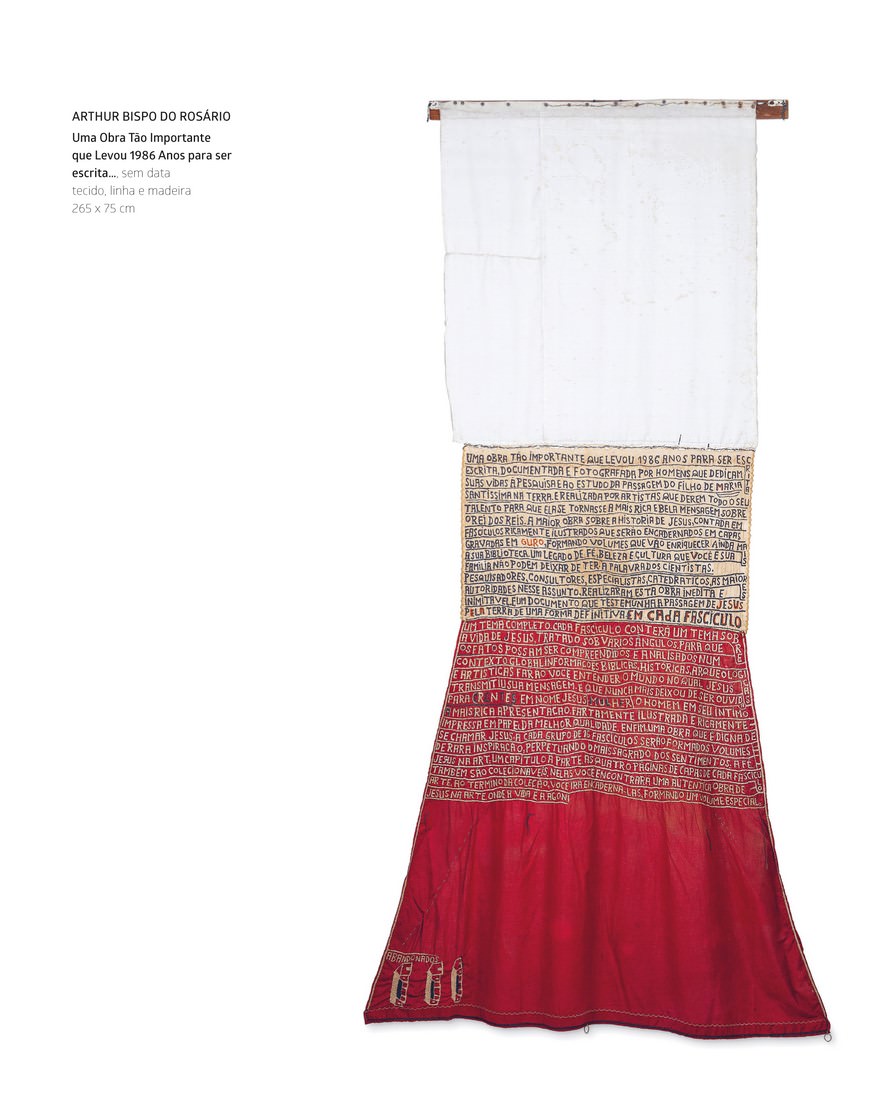 Fig. 5 -A work so important that led 1986 years to be written, Arthur Bispo do Rosário. Photo: Rodrigo Lopes. 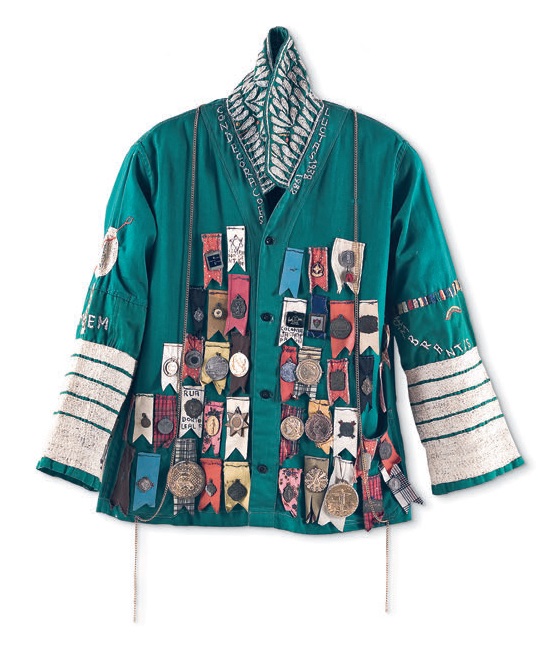 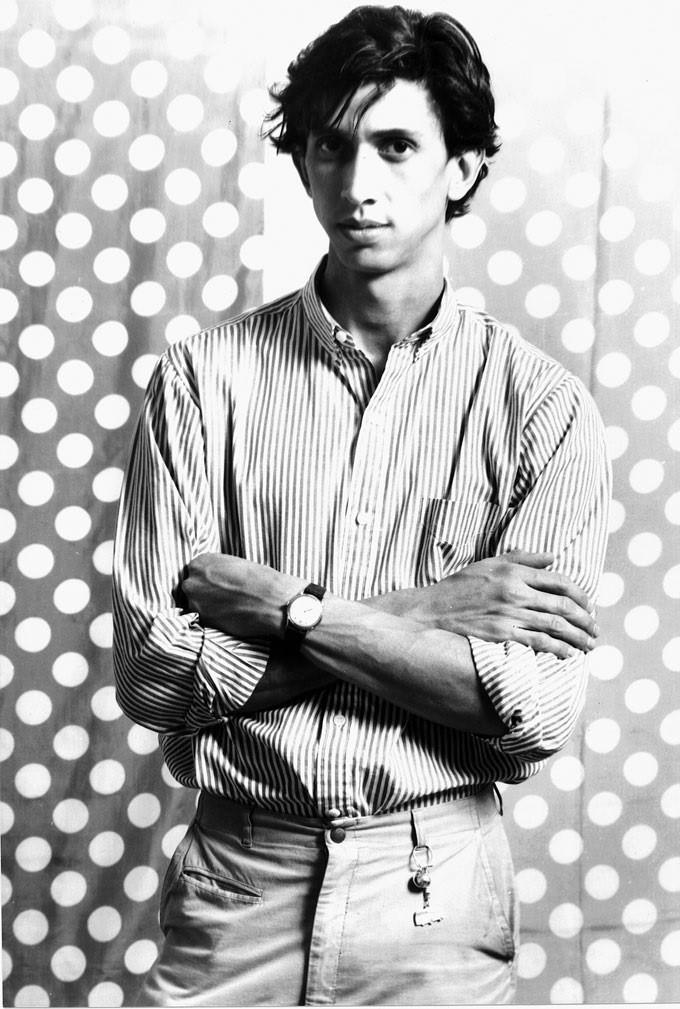 The originality of his work turned out to be an inspiration to other artist, the Sena (1957-1993) (Fig. 7), that came in contact with the work of Bishop in 1990, at the Museum of contemporary art of São Paulo (São Paulo). Born in Fortaleza, Ceará, Jorge moved to São Paulo in 1961; studied on Panamericana School of art and, in 1977 He joined the Álvares Penteado Foundation, in the course of Visual Arts. In 1980, abandoned the course, to enter definitely in the panorama of contemporary Brazilian Art. He was initially the Pop paintings, in the years 80; and went on to produce works with a deeper sense, in the years 90. In addition to paintings and drawings, the artist produced sculptures, and embroidery facilities. Although Bishop and Jorge have not met in person, his works are connected by endless spinning points embroidery; connect the collecting of everyday materials; the symbolism of his work; and the repetitions. The soul of Sena States are striking in their work. His strokes reveal a romantic and nonconformist stance before the world, through an intimate language. Their work, like a personal journal, reveals phrases, words, organic shapes and embroidered designs on fabric threadbare, worn. His latest work, from 1993, It was an installation in the chapel of the Morumbi, in São Paulo, and leave a message about the Ephemerality of life. The artist died at a very young age, but left admirable poetic intensity works. 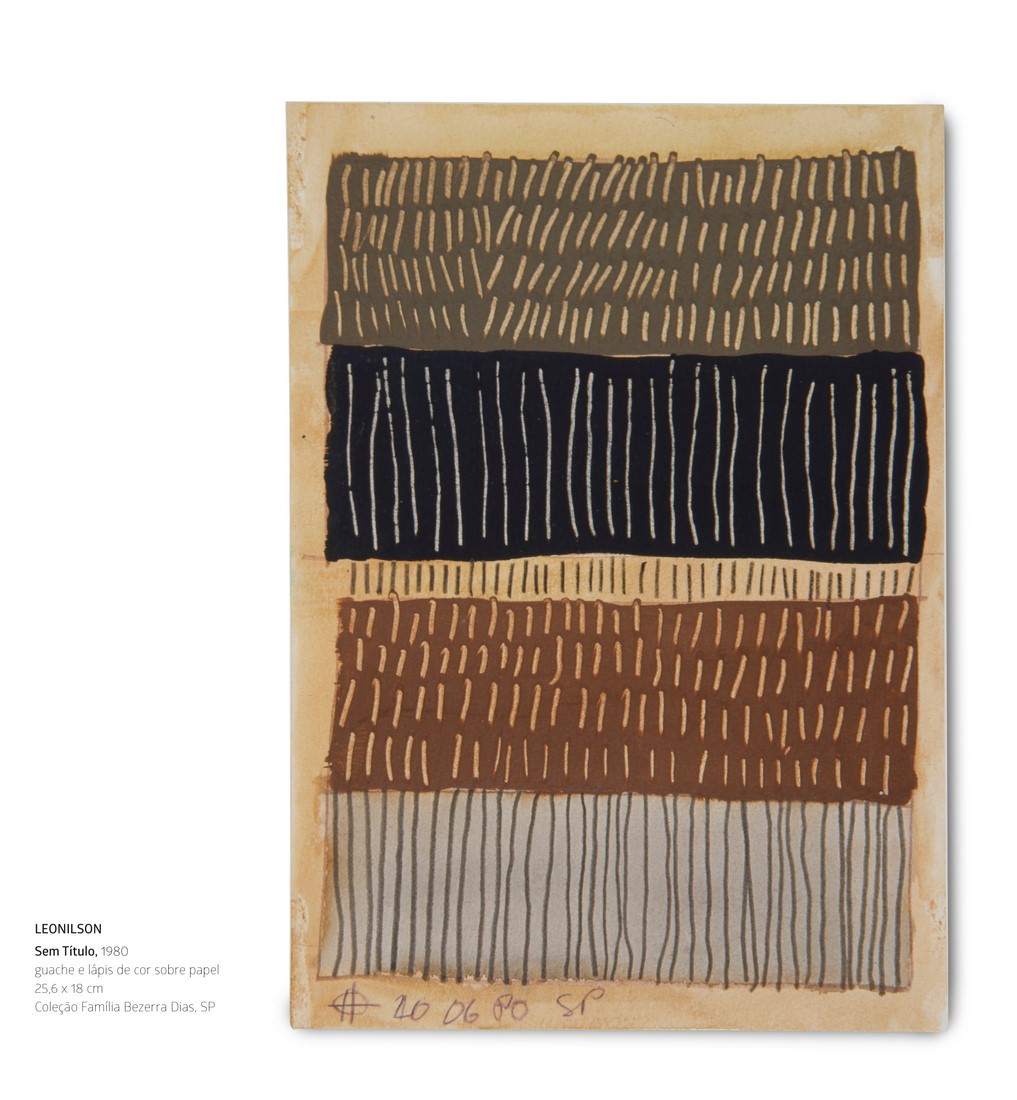 Curated by Ricardo Resende, SESC de Sorocaba presents a meeting of these two artists, through 50 works, that can be seen from 18 September to 29 November, in the exhibition space. Are present in this show, the embroidery, as a form of artistic representation and expression of feelings, that was both common.

The trajectories of Bishop and Steph, are your thoughts, their troubles. Of Bishop, poverty, the marginalization, mental problems and suffered confinement. From Steph, the interruption of life, with HIV, and the proximity of death. Of both, the long, interminable waits and genius who rebelled in an artistic practice liberating, clear, that turned out to reclassify the transient, perpetuating it, through the word. 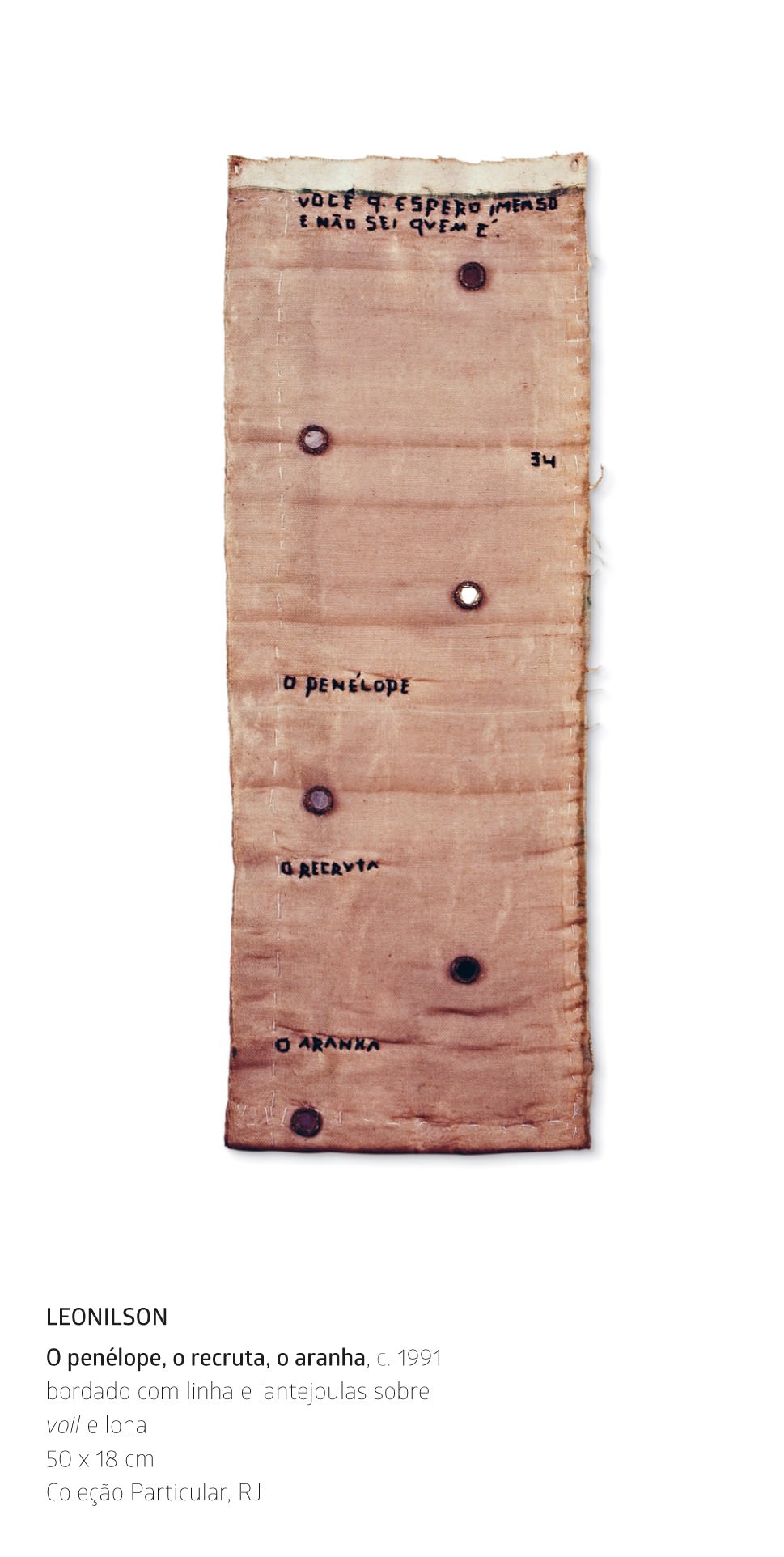 3 Penelope was the daughter of Icarus and Periboea. She was married to Ulysses, He left to fight in the Trojan war and, for a long time, Penelope did not receive news of him. Wanting their daughter to marry again, Icarus introduced her to several suitors. Penelope could not counteract the father, but I wanted to wait for her husband. Then accepted the Court of suitors, with the condition only if married, After finishing the shroud that would do for the father of Ulysses, delaying so, the new marriage. Wove so during the day, and night, cutting up the plot. After twenty years, Odysseus returned to his wife, dressed as a beggar and took revenge of the suitors of Penelope. (KURY, 2008, p. 315)

Check out the videos of the visit of Rosangela Vig exposure:

How to get there: