The estrangement generated by the creative and thematic individuality of the artists that make up the exhibition, to be accentuated by the predecessor history of each, It generates a feeling of intimacy with the stranger who approaches different. different jobs, different media, customized technical, but cohesive message, in unison. Reflection as a proposal to close the creators can generate strangeness to external, but it's comfortable condition to artists already in the development of research on the matter.

"The exhibition explores the friction between the intimate and the strange artistic", curator defines the.

Starting from the premise that the shortest path to intimacy depends on the consistent understanding, understand and know, it becomes taxable event for an experience of rupture in the properties and definitions of what is intimate and what is external, alien.

FIG established parameters and released to create. Catherine We opted for large format drawings on paper that resemble extraterrestrial bodies. Franco occupies the canvas cine with videos making from 3D authoring software exploring a kind of grotesque deformation. Nalu mounts an interactive installation with its plush sculptures, with certain sexual overtones; as Roberta which also shows sculptures made from everyday materials and explore the issues of sexuality, power and humor.

Catherine Sabino, It is not related to messages rather unusual sensations causing sequence breaks, breaks, moment they are deciphered their dashed. The artist's body by the study is a recurring theme that now generates organic forms, in repeat, creating new forms of organisms, landscapes, creatures and other possible beings. "Game light on the images of the human body, trying to understand the ramifications of the meeting of the boundaries between inside and outside crossed by the concept of abjection and no body, creating new organisms ", says the artist.

Nalu Rosa, immersed in the project Imo, a series of works that refer to intimacy, pleasure, comfort, sometimes, no plausible explanation. The search is for the host without amaras nor conduction that take the visitor to interact with the work seeking to exploit its forms and textures and sensations they provoke. In his own definition "are textile objects made with nice fabric to the touch, as plush and sweatpants, Embroidery and internal fill fiber or tow siliconized. (…) work usually receive hugs, grips and strokes, so talking to the feeling of warmth and feeling of comfort, key issues to the project ".

Everyday objects Roberta Fortunato, common and universal to each, come up with new meanings presenting different shapes and functions. His manipulable objects, true to its original features but not necessarily to its shape, incite the look and curiosity, mental and physical, toward both the personal memory and collective enabling both real experiences as the newly invented. "My objects bring the discussion of our impermanence, the transience and fragility of life, a direct approach and unadorned, at the same time intimate and strange "defines Roberta.

Part of poetic 3D videos Franco Palioff focuses on transgender issues, inquiries in ugliness and beauty Current, and reinterpretations of mythological themes pornographic way people scanned in this format. His works not static transmit messages questioning values ​​and social behavior, aesthetic and philosophical contemporary, ranging from freedom and possession in social relations, family and marital, questioning about sex and porn, to points on the concepts related to current ugly and violent. The topics relevant to the artist are changeable, alternating in importance, due to personal journey. "I have some issues that have always been important and other, I came discovering in recent years where I had a small development of my social thought. Of course also, It was the product of recent social crises that have occurred in Brazil, where it was necessary to speak of them ", define Franco. 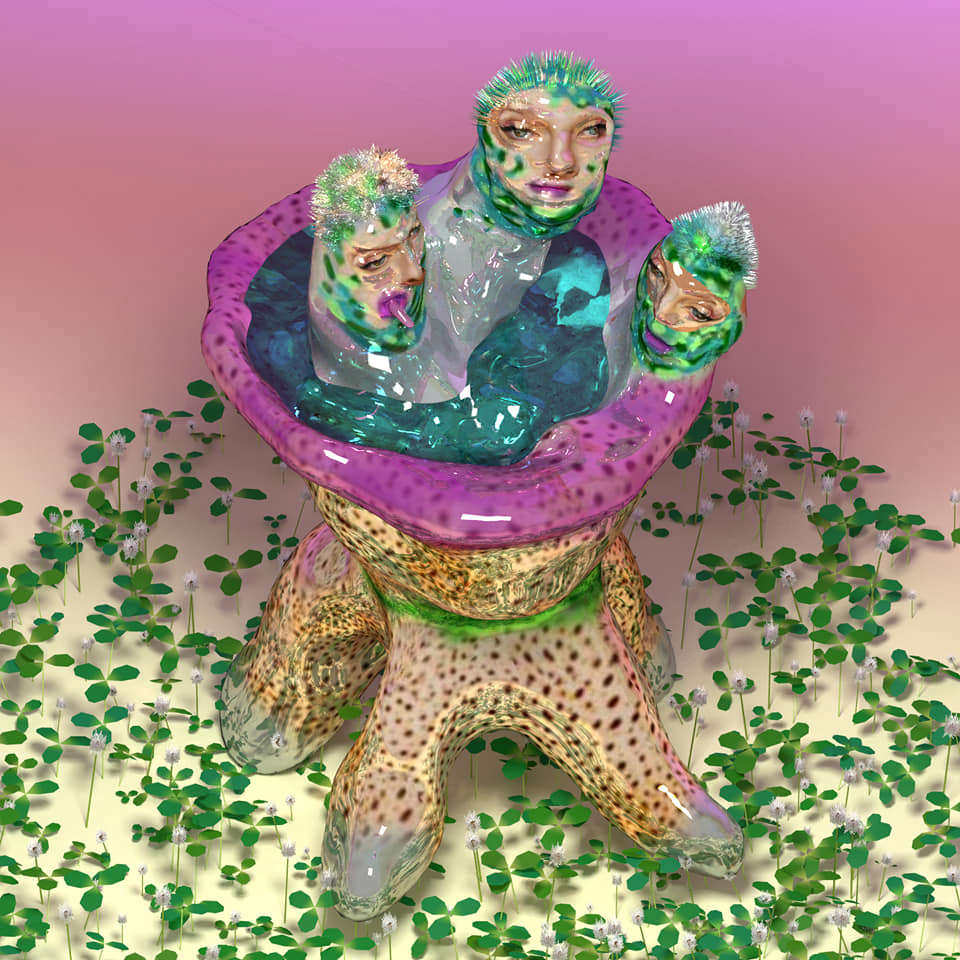 Franco Palioff (1988) – Born in Argentina in 1988, lives in Curitiba from 2017, which is dedicated to art in various disciplines. Bachelor of Nuclear Engineering and applies part of his training to interactive robotic objects and smart facilities, with part of his poetic focused on the evolution of human-machine symbiosis, Religious and human stages in the function of human achievement of a Smart Object to a world connected by computer. Makes 3D mapping use with Kinect (photogrammetry), VR glasses, sculpture and 3D printing, robotics and programming in various languages. no curriculum, individual and group exhibitions in Buenos Aires, Junín, Bariloche, Florianopolis and Curitiba.

Nalu Rosa (1989) - Born in São Paulo, It is a visual artist and student of Visual Arts by UNIP. Based production in painting, drawing, installation and textile art, covering topics such as the desire, the pleasure, sexuality and the subconscious. Exhibitions in Sao Paulo, Rio de Janeiro, Ubatuba Hall of Visual Arts and is currently one of the artists of the 26th Salon of Plastic Arts of Praia Grande.

With the entry in the era of participation and sharing a group of artists and curator have decided to create a project in which the multiplicity, diversity and experiments were motes.

The Canvas Art Gallery, which opened its doors in Barra Funda in March 2019, It is a partnership between the curator and the artist Duilio Ferronato Higo Joseph, and you want to go beyond the binary concept and watertight polarizations. On Canvas Gallery artists are alive, They are partners and will participate in both the creative process and administrative issues.

'The process of creation and his ways interest as much as the finished product', says Higo.

"The coexistence between curators and artists, though often it is painful and choke ganas, It is profitable and even fun; because after one of the most obvious aspects of art is to produce just outside the norm and mood. We are misfits and produce no precise definitions, but with the certainty that we are in line with what we believe ", explains Duilio.

Previous: Museum MM Gerdau(BH) It presents an unprecedented exhibition of works that explore the relationship between art, Science and technology
Next: Yohannah de Oliveira presents The Shape Of Life