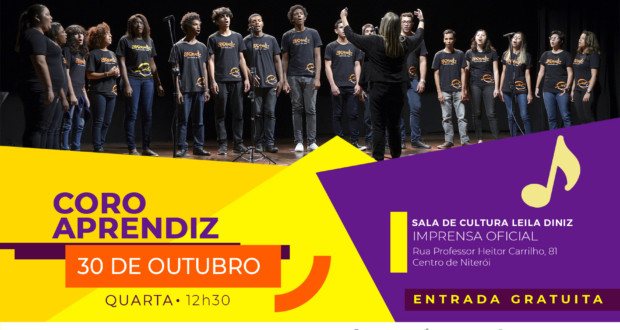 The Apprentice Choir presents on 30 October, at 12:30, in the series "Concerts in the press", the room Leila Diniz. The entrance will be free.

The Apprentice Program | Music in Schools – initiative supported by the Niterói City Hall - always presents its Reference Groups in the series of concerts Leila Diniz Culture Room, every last Wednesday of the month and, in October, It will be the turn of the Apprentice Chorus present their altos, sopranos, tenors and basses for the public.

The choir consists of Novice 27 children between 10 and 23 years, as well as teachers. The performance bets on refinement and innovation, performing with up to eight voices simultaneously open, and perform body percussion in one of the songs.

Always accompanied by a piano and cajon, formation presents a repertoire that includes "Medley Gonzagão" Luiz Gonzaga with special arrangement of Edu Bay, "What is this thud?” and "Brazilian Jacksoul" Lenin, "From Leme to Pontal" Tim Maia - among other successes of the MPB.

This edition also includes the participation of the instrumental group formed by themselves choristers in music "From January to January", where three violinist and bassoon accompany the song melody lines.

Previous: “Through Glass” It offers glassmaking art workshops in São Paulo
Next: “That justice be with you”, fan meeting in CCJF #StarWarsNoCCJF