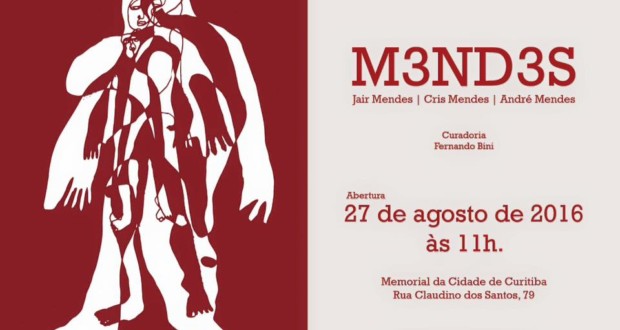 Artistic diversity of the Mendes family on display in Curitiba Memorial

Artistic production of three generations of the Mendes family will be on display at the Salon in Curitiba Memorial Paranaguá, from 11:0, This Saturday (28). Curated Fernando Bini, “M3ND3S” the paintings in oil on canvas by Jair Mendes; the videos, paintings, drawings and installation of Cristina Mendes and André Mendes productions.

The professor of art history Fernando Bini recalls that in the years 1950 academic standards were disrupted and opened the doors of the modern art of Paraná with renewal movement. Within this movement, Jair Mendes is considered one of the artists most elmente keep the generation "expressionist", following what was exploited initially by Guido Viaro. “The expressionism of Jair Mendes is rebellious and explosive, so cheerful and colorful”, emphasizes Bini.

According To Bini Cris Mendes, niece, granddaughter of Jair, part of a Rico course in painting with a work about the shape and color that ended on geometrization without, however, turns off of certain elements, even that small, symbolic order.

With respect to the work of André Mendes, nephew of Cris, Bini remember that their job is more pictorial graphic. “The periods spent in Spain in direct confrontation with the works of Miró, Tápies or Picasso, the practical lessons of artistic design, much enriched. Had an important experience in Group and with urban art in Curitiba, with the monumentality of mural art and appropriation of space”, says Bini.

“The great importance of this exhibition is the example that is given to us by these three artists: Jair, Christopher and André. The relationship of friendship, much bigger than kinship, turn that love into a clear larger objectives of art assimilation of these times, the exaltation of the human being in the relationship between the sacred and the profane. But without forgetting that is drawing and painting that they speak”, Finalizes the critic.

Previous: Tuesday, day 30, will be the last day to visit the "Abaporu", masterpiece by Tarsila do Amaral, at the Art Museum of the river-SEA
Next: Exhibition “Art of being” Caesar Potério