Between the days 30 May and 14 July, the Emmathomas Gallery opens its doors to the first solo exhibition 2018: two SpherogrÁfias, Gilberto Salvador, curated by Ricardo Resende. The show brings together 17 works produced by techniques that reflect the poetic thought of the artist, recognized by the diversity of media and dimensions in two-dimensional and three-dimensional projects, proposing to the public multiple interpretations.

Inspired by the Spanish poems Federico Garcia Lorca, twelve of works that comprise the exhibition panels are removed fragments of writer's poems. With effect caused by the release of spheres covered with black ink, this unprecedented cut makes a diving between two artistic languages: the human body and literature.

"The artist of a work only." These are the words of the artist to look at what has produced over more than 50 year career. "It created no strings attached, coherently exercising the freedom to dream, think and visualize movement, colors and shapes. Your imaginary plastic is inspired by nature, in organic shapes that make up the world. Your creative process does not change. Whether it's in the paint, whether in sculpture, if it is in the picture. In all languages, occurs in the same way. Not Escultor not pintor. The hybrid is the artist ", account the curator Ricardo Resende. 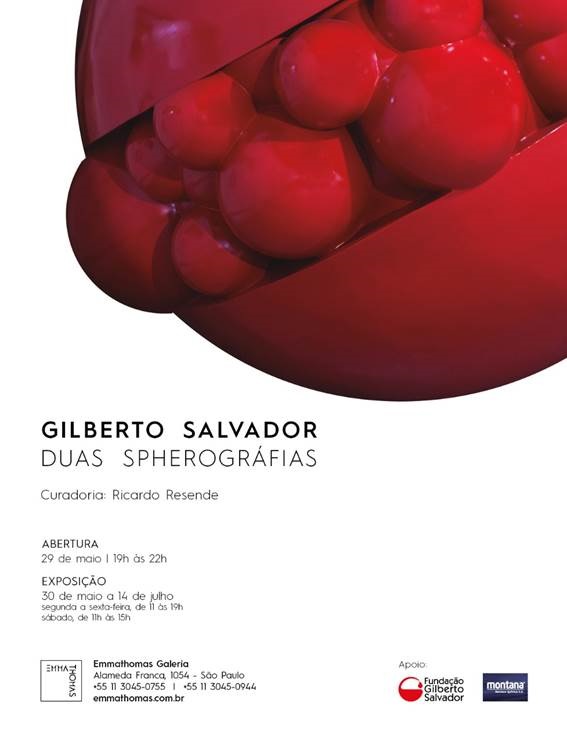 In over 50 years of experience, Gilberto Salvador has always worked with spherical shapes. Now presented mystically, also reveal certain symbolism and playful aspects – topics often discussed in the works of the artist, that this production used tennis balls as paint tool.

With extensive three-dimensional repertoire, mainly in respect of works in public spaces, Gilberto Salvador inserts a big red ball in the center of the gallery. In invasive and uncomfortable medium, sculpture allows audience interaction – that will surround it to contemplate its three meters in diameter.

According to the artist, Two-SpherogrÁfias, the ball transmits a romantic view. "I divided the exhibition segment: and the unprecedented two-dimensional cutout, the ball is used so that almost instrumental; no second, the use of the sphere is given as interactive and questioning agent to the public, representing its meaning more clearly. Finally, objects running on the wall change the position balls and cause sounds. This movement creates activity and passivity, that is, androgyny ball ", explains.

Painter, designer, recorder, sculptor and teacher, Gilberto Salvador is a graduate of the Faculty of Architecture and Urbanism (FAU/USP). He stood out for his restless spirit, the formal innovation and by a singular boldness to put the aesthetic issues based on a solid understanding of social issues and planetary.

In 1965, It held the first solo exhibition at the Arena Theater Art Gallery in São Paulo, an important political context. She participated in several editions of the International Biennial of São Paulo. It held two solo exhibitions at the Art Museum of Sao Paulo (MASP), in 1985 and 1995. In 1999, Xango installed the Flight sculpture at the subway station Jardim Sao Paulo. Artistic production is characterized by the contrast between sign and the hard dash, between organic and inorganic forms, between the movement and static.

Under the artist management, collector and businessman Marcos Amaro and artistic direction of curator Ricardo Resende, the Emmathomas recently opened a new space in the Gardens. The gallery is back to the art market with a more bold and innovative proposal, breaking ties and presenting to the public a body of diverse artists.

Previous: Practical Course: Conservation and Restoration of Tiles, with Prof. Titina Corso
Next: Exhibition "Portinari - Construction of a work"