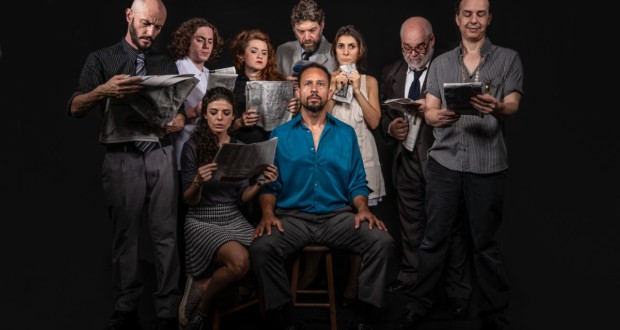 The Kiss on the Asphalt, directed by Bruno Perillo. Photo: Kim Leekyung.

Considered a classic of Brazilian theater, tragedy written by Nelson Rodrigues in 1960 It is staged by director Bruno Perillo in unprecedented season on ABC and São Paulo

Considered one of the greatest legacies of Nelson Rodrigues Theater, The Kiss on the Asphalt gets new assembly with debut season at SESC Santo André between days 18 October and 10 November. Incisive and current, the work is the power of the media world and all its unlimited developments, their relationship with man, its consequences, their moral and ethical portrait of Brazilian society.

In the story that takes place in Rio de Janeiro the years 1960, Nelson Rodrigues exposes clearly and objective terror that is spreading before a news out of the unconscious of normal paradigm. In the Praça da Bandeira, in Rio de Janeiro metropolis, a man is hit by a stocking on the curb. In his last moments of life, he receives help from the agonized Arandir, that surprises passers-by with a gesture: kissing on the mouth in a hit man about to die.

It is from this small and simple act that Arandir is a mere witness to an accident charged with a crime. The turnaround is thanks to Amado Ribeiro, a decadent reporter interested in selling headlines. He witnesses the scene and reports the event to the delegated Cunha, with whom a partnership firm to manipulate the facts from obscure interests and.

"The great misfortune that befalls Arandir perhaps the intrusion and theft, in its deepest intimacy, a sale and a toxic endemic ignorance, that originate in the oldest remnants of our country's foundation ", says the director of the play Bruno Perillo. "The text of Nelson Rodrigues has this power be inserted into any historical context and gain dimensions without having to move or change the dramaturgy".

For the new assembly which opens the SESC Santo André, the director proposes a scenario that makes an X-ray of the original text to try to investigate, with an in-depth look, the roots of the events that befall the characters and their most relevant issues for Brazil today. "It's like the Brazilian Nelson desnudasse behavior from a simple kiss on the street. A people who have warmth, and at the same time a very great violence ", explains.

Agile text, potent and fractioned, gains an aesthetic simplicity for the sake of narrative efficiency, without a complex structure scenographic. There is no exchange of scenarios and actions occur in a shared manner, with the stage divided by the play of light and actors on stage.

During the show, the actors remain on stage all the time, is the focus of the scene, is composing images in relation to the focus, but never passively, always look great as a foreign judge.

for Perillo, "Interpretations go to try and expose, on the edge, The Barbarian game manipulation as opposed to what we call poetic existence field. As an X-ray, we explain the bowels of this text, without subterfuge, and without any trace of caricature ".

The new assembly Kiss on Asphalt debut day 18 October, Friday, at 9:00 pm, and is the SESC Santo André to 10 November, with performances on Fridays, Saturdays and Sundays.

a hit. A man falls on asphalt, in Praça da Bandeira, Rio de Janeiro. In his agony, asks a kiss another man who ran to his aid. The kiss happens, the hit dies, the crowd around witnessed. From that event, a tragedy unfolds. The Kiss on the Asphalt unmasks, with visceral, the roots of Brazilian society, your characteristics, vices and deeper stigmas.

Previous: Singer Jay Vaquer performs with the Orchestra Rope Base
Next: Hall calls researchers to unravel the city to Curitiba