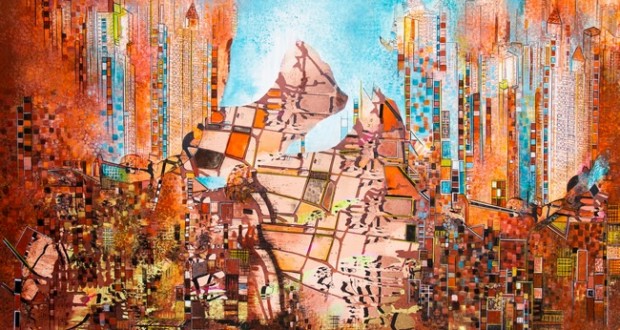 "constructive territories", painting 2019, mixed technique on canvas, with 96 cm x 159 cm. One of the works of Miriam Nigri Schreier at the exhibition Imaginary Cities.

The exhibition imaginary cities, of the artist Miriam black Schreier, inaugurated in Pinacoteca Benedicto Calixto in the last day 7 August, had its end extended for another week, now the visitation will be open to visitors until Sunday 29 on Sep.

The show features an intriguing set of thirty-three works, half of them produced in the last three years. The suggestive title imaginary cities reveals the urban theme that runs through all the recent work of Miriam black Schreier. But in this new solo exhibition the artist also includes some etchings and paintings on paper, of the period 2013 and 2014. These are works that are opposed to the latest screens, Most of the shows, and allow the viewer to follow the evolution of his language and the technical changes, began in 2012.

The curator is Carlos Zibel and Antonio Carlos Cavalcanti.

Previous: Without Barriers - Accessibility Festival and Artists with disabilities is promoted by the City of São Paulo
Next: São Paulo hosts first international exhibition of jewelry in Latin America