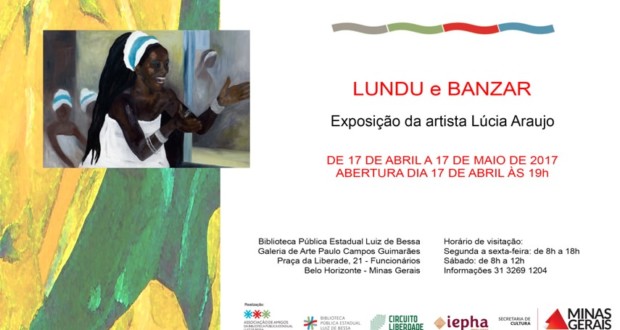 Two series of combined works are proposed to this exhibition:

A Lundu Series, is a series of paintings in oil on canvas that part of a survey conducted in the year 2016 about the participation of African culture in the genesis of Brazilian culture. The series of paintings had a Bank of reference photos for me produced from the visitation of various cults and festivals in the city of Belo Horizonte. The paintings focus on display the wealth of rites present in variety of colors, rhythm and movement. An expressionist series with great contrasts and variety of strokes. The series so far with the number of 10 paintings that proposes the rescue of African cultural wealth subdued by time in the process of consolidation of our cultural identity.

A Banzar Series is a series of serigraphs on pictures whose reference pictures produced by me in the city of Belo Horizonte in different consumption scenarios that highlight the exclusion in the metropolises of the economically poorest classes, especially exclusive to blacks and Browns. Such pictures are given a silkscreen intervention that highlights the contrast and distance between different worlds. The work is in fact a composition in mixed technique of two different plastic antagonistic languages, photography and printmaking. The certain inconsistency apparent in the combination of the two media aims to symbolically enlarge the perception of social exclusion tackled by series.

Previous: Book shows how the poetry
Next: Contemporary-international exhibition of Textile Art