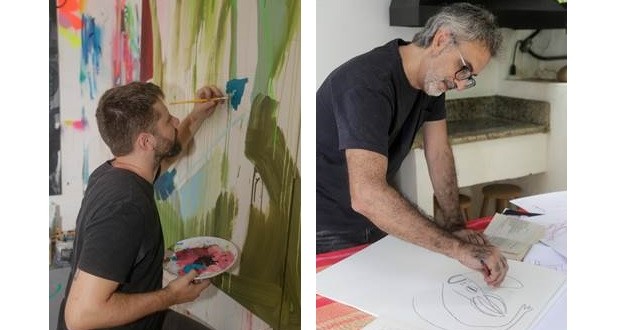 A English Culture Festival supports annually, through its Notice, Brazilian theater projects, dance, visual arts and short films inspired in British culture. In 2019, visual arts productions will occupy the three galleries Brazilian British Centre from 25 of May to 16 of June, with free entry. Between art installations, ceramics and interactive works, the three exhibitions selected investigate change processes and explore the relationship between legacy of the past and the contemporary.

The exhibition Everything is Covert depicts the artist's research David Magila, whose main focus launch a closer look at the landscapes of everyday life and inhospitable places that carry a "start architecture", processed by the time, and the possible desire to connect a portion of the legacy of the tuned memory with the present. When reconfiguring and reflect the discussions about identity politics in contemporary, shows that comprises 13 works in painting formats, video, design and installation, captures the fragility of human life and the profound beauty in the everyday.

Among the places explored, David portrays the London Park Parkland Walk through a series of drawings that the artist produced during his visits to the site. “In fact, the site was an old train road that has been disabled and is now a park with green corridor. As winter was, It was a little place frequented by people, and so I saw the beauty in that place. I started taking pictures, making drawings and collect material pure interest, unassuming."

Besides the park, the artist developed an installation that depicts the East Beach, a piece of the North Coast being swallowed by the sea already submerged houses. The artist collected elements of the place as debris / ruins to portray him. The result is an installation consisting of a video of your search, sculptures made from this material and some silicone molds.

In the production "Tiger, Tiger”, the artist James Master It presents an exhibition that relates to the ceramics tradition, in English culture, since the emergence of the idea of “studio pottery”, in the early XX century, to its most recent developments. On a more free circulation of exploratory and production of ceramics and inserted within the contemporary art, the exhibition seeks to find a place for negotiation between this historical legacy, with their problems, and new possibilities discursive.

In Notes of a Dream, the cartoonist Caco Gallardo presents an exhibition inspired by the classic comedy "A Midsummer Night’s Dream” (A Midsummer Night's Dream), by William Shakespeare. The exhibition brings together the artist's passions: o humor, comedy, theater and design. In the remake Shakespeare's text, the artist paints pictures described by the playwright, as well as uses sentences of the dialogues of his work, exploring this mix of content. “Dream of a summer night is known as the best Shakespearean comedy, and my work has a lot of humor. It was almost natural together and compose a work that would bring together all these worlds"Says Kermit.

Among the works, the audience finds paintings on paper and acrylic and a panel that the artist will paint directly on the wall of the Brazilian British Center Gallery. There will also be an interactive space (that even remember Yoko Ono's work), with a bench with papers on which people can write down their summer dreams. These notes will be placed on a panel to make these dreams.

To Fabio Cypriano, one of the visual arts curators notice, "The English Culture Festival is one of the few permanent programs to support artistic production not only in the city, as country. Its importance grows now with decreasing support from public agencies. In visual arts, he awarded artists like Odires Mlászho, in 2008, that two years later would be in the Bienal de São Paulo and then representing Brazil, in Venice. Other highlights can name Henrique Oliveira and (Eduardo) Srur, both with presence in the national and international circuit ". The select group of art curators category still meets Claudia Marchetti, visual artist; Julio Landmann, former president of the International Biennial of São Paulo; Marcelo Araújo, museólogo, former director of the Pinacoteca de São Paulo and current director and curator of the Japan House, and Martin Grossman, professor of ECA-USP and former deputy director of the MAC (Museum of contemporary art).

A full schedule of 23 Cultura Inglesa Festival is available at www.culturainglesasp.com.br/festival.

Notes of a Dream

The display consists of a large panel painted directly on the wall, ten paintings on paper with Part phrases and an interactive space which will consist of a mosaic of dreams notes the visiting public.

There are more than 80 years in the market, Cultura Inglesa is a non-profit organization and the largest English language school system in the country not franchised, ensuring consistency in the quality of education. In addition to providing a comprehensive English program first line with unique online components and interactive whiteboards, their teachers go through, at least, 120 training hours / year in courses and conferences in Brazil and abroad. The English Culture sum 59 units in the states of São Paulo, Santa Catarina and Bahia, serving more than 80 thousand students, with a faculty of more than 500 teachers and offers a wide range of cultural activities including children's theater and adult, musical, pop and choral music.