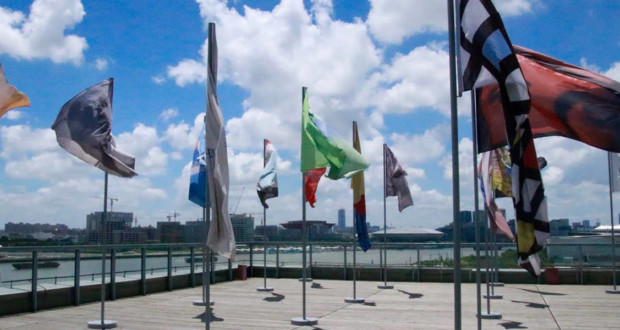 The headquarters of the Getulio Vargas Foundation (FGV) make your way in the next day 17 July for another edition of BIENALSUR, cultural event best known contemporary art in South America, that presents the work Draw me a flag, Cartier Foundation, conceived by French artist Christian Boltanski.

The installation consists of 31 flags, designed by artists from various places, not representing countries, but only and simply visual identities for a world without borders. The book arrives in Brazil with the support of the French Embassy and the Institut Français d'Argentine.

FGV once again part of the project, which aims to unite artists from all continents, With Distributed exhibits, at the same time, by diverse places in the world. The organization of the 2nd edition of the International Biennial of Contemporary Art (Bienalsur) FGV in space is within the mission of the institution, which has among its many other activities, contribute to the development of culture in Brazil, as well as to promote cultural events that project the city of Rio de Janeiro and the country abroad.

The work on display reaches KM 2486 its unique mapping, that extends around the world until the month of November with exhibition 400 artists, in more than 100 headquarters - which work jointly and collaboratively - in 43 cities of 20 countries, all with free admission.

Anibal Jozami second, CEO of Bienalsur, attempts to show, through art and culture, promote dialogue and integration between our peoples and, also, impregnate the North chains with new content. It is a project born of interdisciplinary studies in international relations and the theory and art history. "The Getulio Vargas Foundation joined, from the start, this initiative and joined, along with other international universities of first level, the academic network Bienalsur ", the firm.

"In this second edition, FGV receives the project Draw me a flag, which is an attempt to eliminate the boundaries and bring people through art. For us we create Bienalsur, it is a privilege to count on the membership of one of the most prestigious institutions in Latin America "highlights Jozami, who is also rector of the Universidad Nacional de Tres de Febrero (UNTREF UNIVERSITY), in Buenos Aires.

On an idea of ​​Christian Boltanski, a Cartier Foundation for Contemporary Art Lancou esse projeto, that is growing and adding new brands to authors. The installation consists of approximately 80 flags designed by artists, scientists, philosophers and partners Cartier Foundation, who contributed their programs over the years and now constitute a community.

The project is also part of BIENALSUR 2019, in the public space in Buenos Aires City and is related to the work "Banderas del fin del mundo" installed in Tierra del Fuego, the southernmost point of the Biennial, where it took place the opening of this major cultural event.

With its unprecedented cartography BIENALSUR eliminates borders, thinking with local artists and from around the world, It works with collaboration and is in ongoing dialogue with the demands and interests of each seat in extending the most diverse contemporary artistic proposals.

"With BIENALSUR we seek to draw a new map for the global art scene expand your senses to other areas. We seek to break with the idea that installed the light is in the North. This deeply symbolic decision allows advance in tracing new paths ", says the CEO of BIENALSUR.

As for Diana Wechsler, artistic and academic director of BIENALSUR, é shows a transgressive, in that it promotes a state of mind that breaks hegemonic stereotypes, that public challenges increasingly diverse and invites a critical reflection on the contemporary from the symbolic productions of artists from diverse backgrounds. The range of artistic proposals BIENALSUR continues in Santiago, Chile, Lima, Peace, in addition to the headquarters in France, Italy, Spain, Morocco, Mexico and Costa Rica.

The second edition of BIENALSUR, International Biennial of Contemporary Art in South America, It will be held from May to November 2019, with simultaneous displays of more than 400 artists, distributed 43 cities, in more than 20 countries. A vibrant arts offer will extend over 100 headquarters between museums, cultural centers, institutions and emblematic areas of public space, with the premise of making the public, freely accessed, the most diverse contemporary artistic expressions. Organized by the Universidad Nacional de Tres de Febrero (UNTREF UNIVERSITY), the first edition of BIENALSUR happened 2017, simultaneously in more than 30 cities, from 15 different countries. This edition brings together exhibition over 350 artists and curators from five continents, in order to generate a global network of institutional collaboration to eliminate associated distances and borders, claiming the uniqueness in diversity.

Previous: Portuguese Language Museum organizes meetings and spoken poetry battles in the 17th edition of Flip
Next: Casa Europa partner of Flip 2019 brings thinkers from Europe and Brazil to discuss the future of Museums and Memory