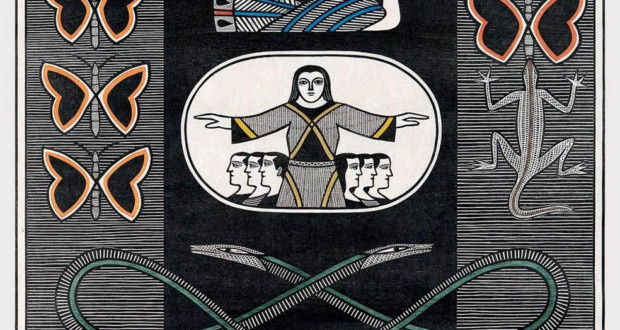 A BASE gallery, complying with all protocols determined by the authorities, displays "Samico and Suassuna - Lunar Perpetual" with, approximately 39 works, between woodcuts and light engravings, from Gilvan female and Ariano Suassuna, complemented by Ana Maria Maiolino, Derlon and Goeldi. The text is signed by Douglas de Freitas. The exhibition marks the opening of the new gallery headquarters, in a property with a project signed by Isay Weinfeld, now having ahead Daniel Maranhão, Leonardo Servolo and Cassia Malusardi.

“Perfect Moonlight”, by Jerônimo Côrtes, is an illustrated almanac-shaped book, written in 1954 and illustrated with woodcuts, that inspired the Cordel movement in northeastern Brazil. The exhibition seeks to contextualize the movement, that started in the 16th century, in Portugal, until the Armorial Movement of 1970, whose objective was the creation of an erudite art founded on northeastern folk art, contemplating all kinds of artistic manifestations.

"By the work of Female is based on the woodcut technique, used by artists of Cordel Literature, as for example the great cordelista J. Borges. Coat of Arms, badges, and several symbols are seen in the artist's production, that in its own way, builds a narrative translated into images of short stories, legends, anecdotes and stories. This way of composing can also be seen in the set of Illuminatures produced by Ariano Suassuna” define Douglas de Freitas.

The work of Female, covering the period of the decades of 1950 to 2012, are woodcuts with unique technique, record biblical characters, fantastic animals, stories and legends of the popular bookseller. His recognition as an artist crosses borders and makes up collections of several international museums and institutions. Beyond MoMA / NY, the artist also has in his curriculum participation in the International Biennials of Venice and São Paulo. “Three Women and the Moon”, from 1959, exposed next to the “Cloud”, woodcut of Goeldi, displays one of the records resulting from the period Female studied with the artist, in 1958, and you can see the visceral influence in his work. 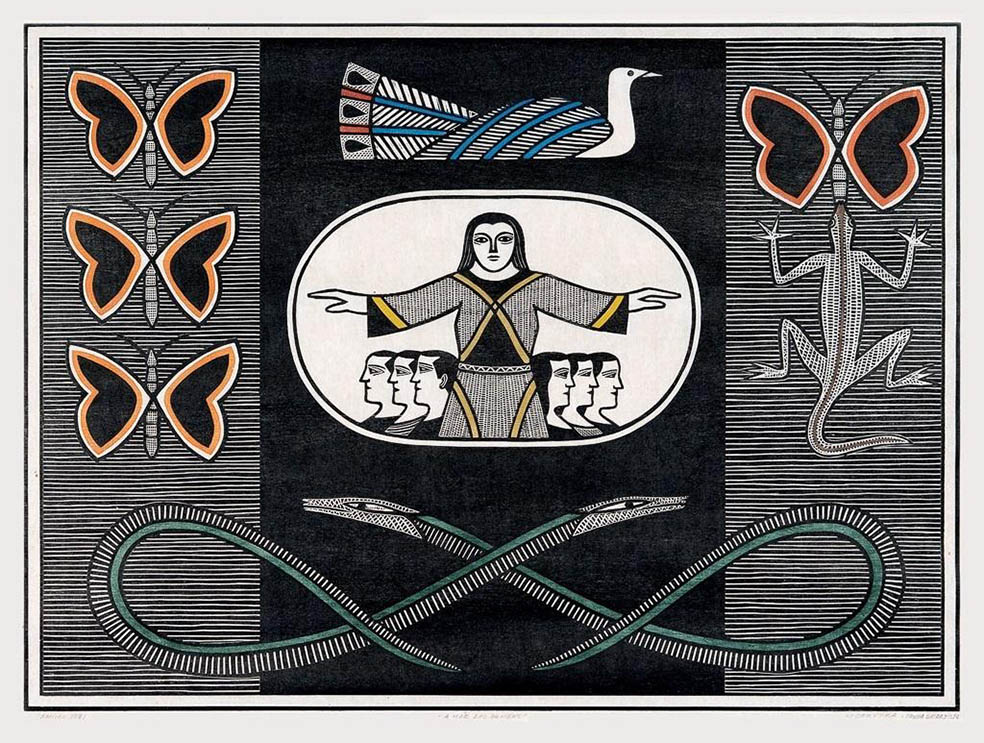 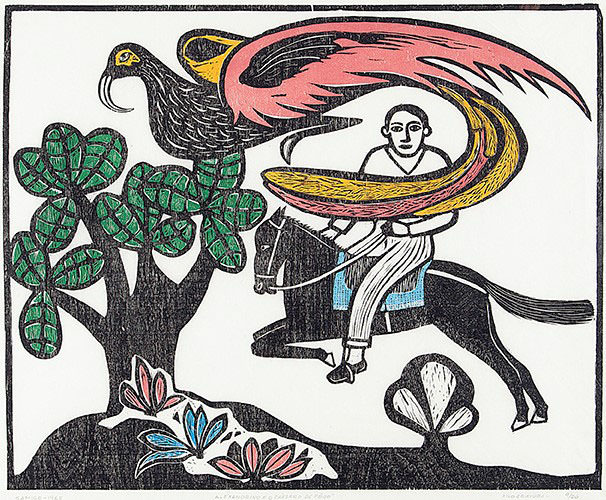 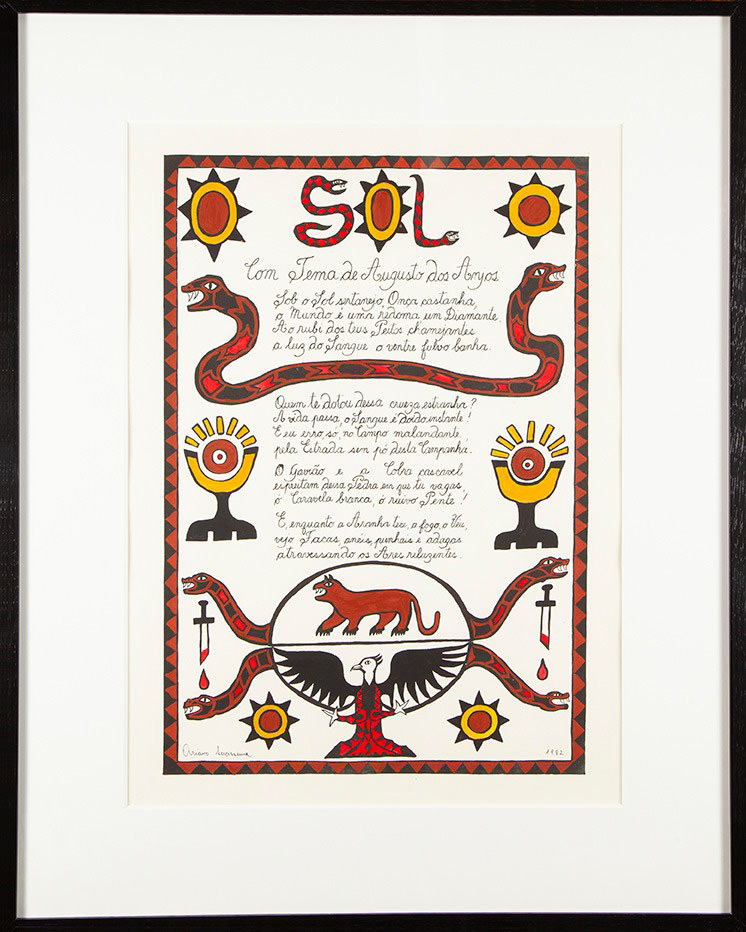 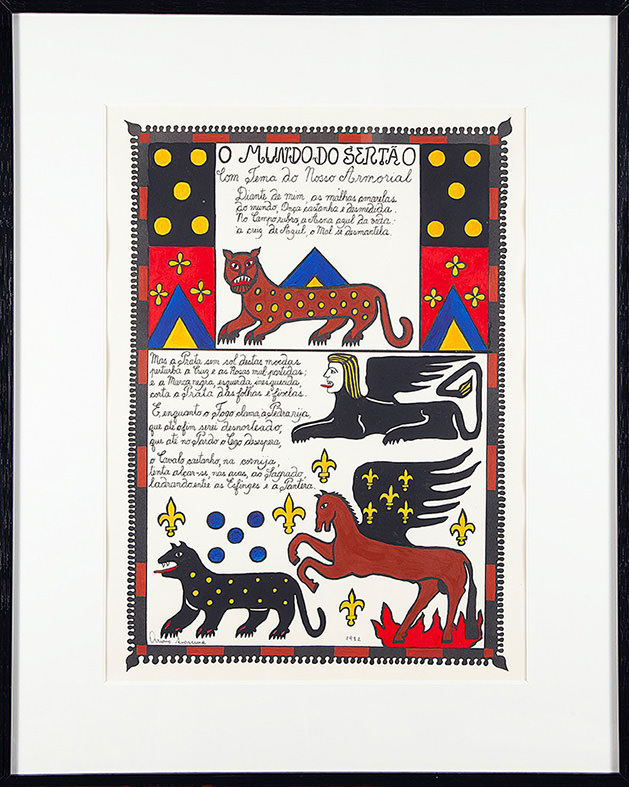 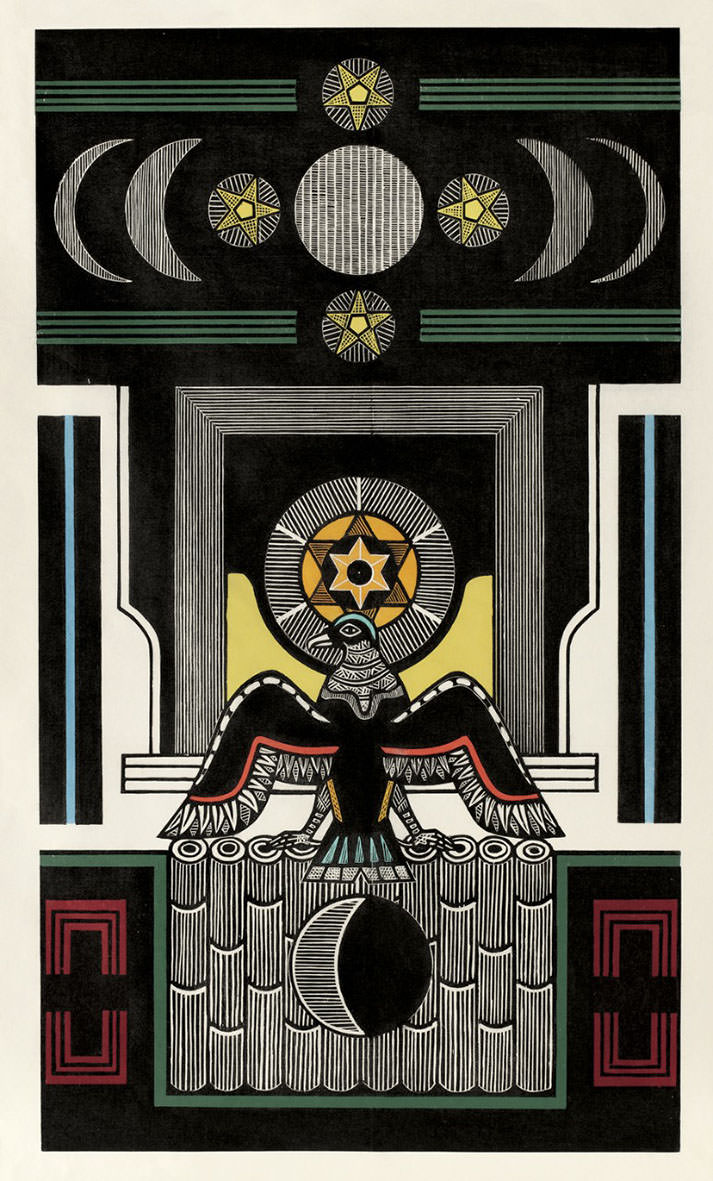 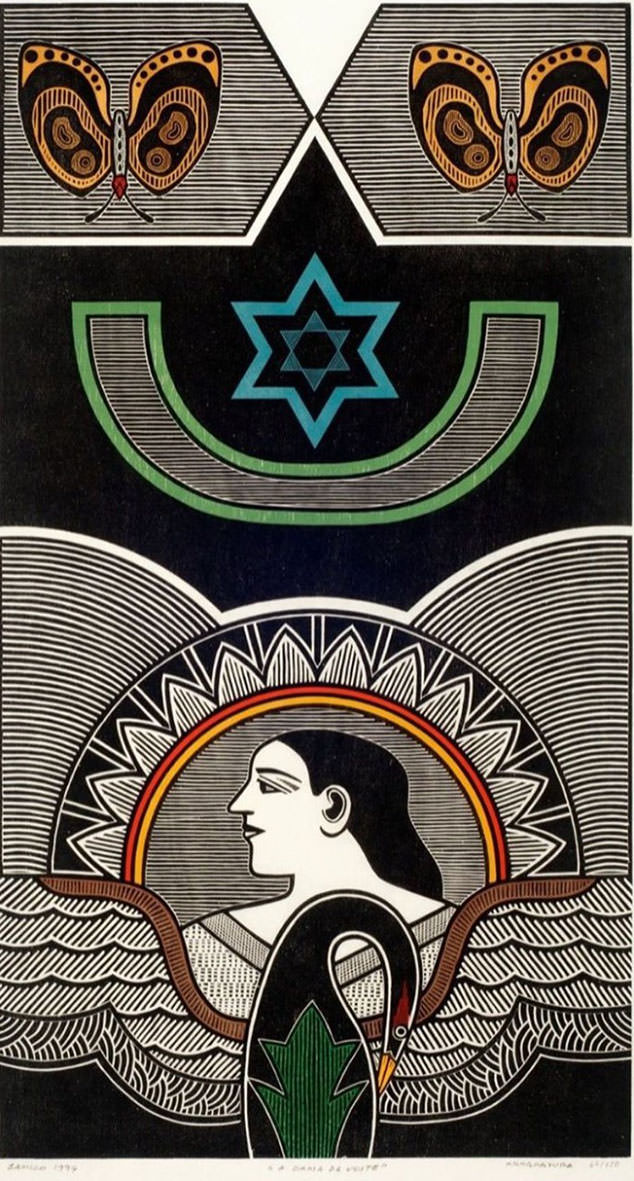 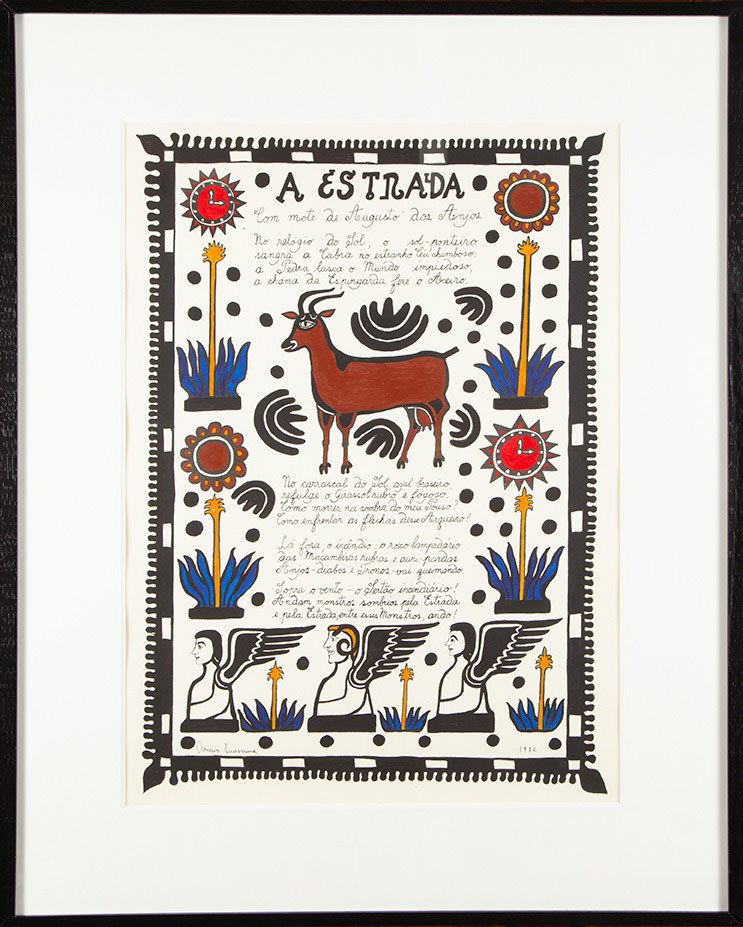 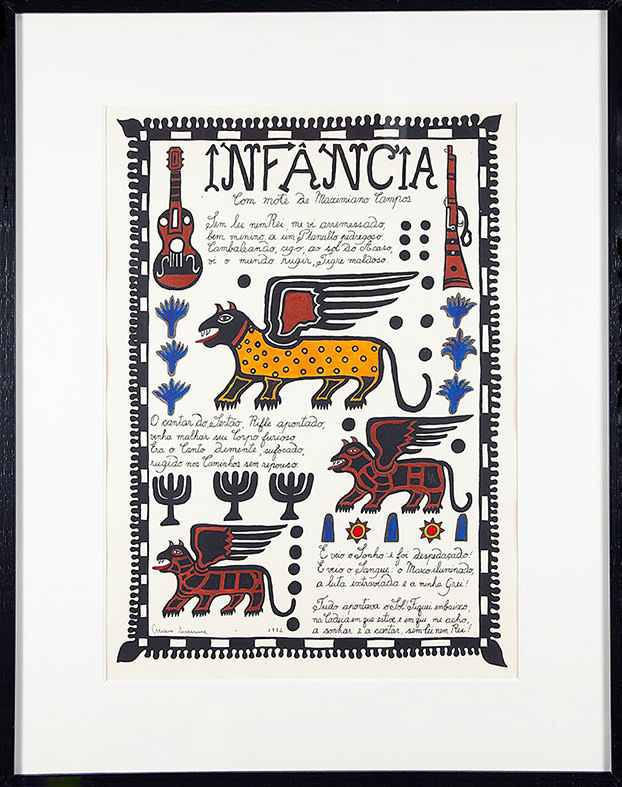 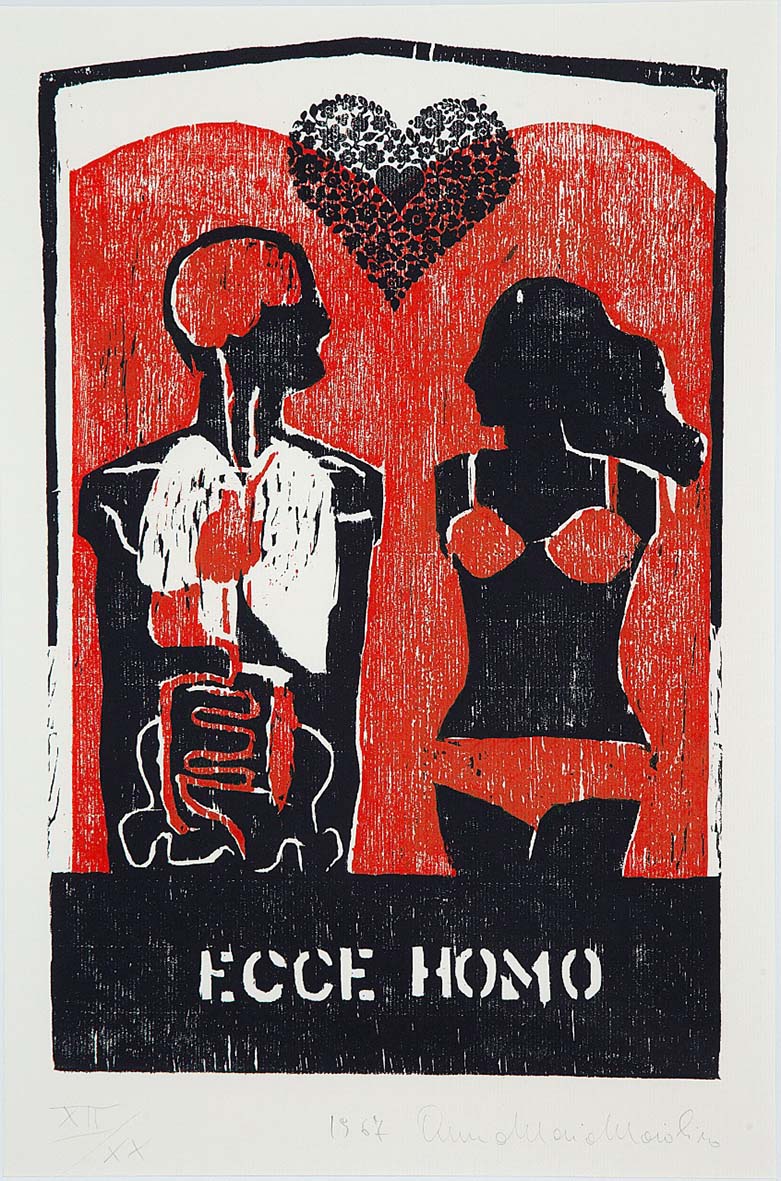 Ariano Suassuna, Immortal of the Brazilian Academy of Letters, exhibits his little-known facet of visual artist, with the illuminogravures performed in the 1980, composing the albums “Ten sonnets with an alien motto” e “Sonnets by Albano Cervonegro”. His works are inspired by the illuminations of the Middle Ages, when the manuscripts were illustrated and painted by hand. Neologism illuminates + engraving gives name to this production. “The illuminogravuras combine poetry with painting, where human images stand out, animals, coats of arms and insignia, alongside literary texts, some written with an alphabet created by Suassuna, fully in line with what the Armorial Movement predicted, proposed by him in 1970 ”, Adds Maranhão.

Integrate the show: the italian-brazilian artist Anna Maria Maiolino, who also studied with Goeldi and produced a series of woodcuts like “Glu Glu” e “Ecce Homo”, with Cordel as the theme; the work of the graffiti artist from Pernambuco Derlon, with work strongly impacted by Cordel and Armorial, represents the contemporaneity of such languages; as well as copies of twine booklets by artist J. Borges, LP’s covers from Quintet Armorial, some literary publications from Ariano Suassuna and video with compilations that include some scenes from “Auto da Compadecida”, by Guel Arraes, part of a show by Antonio Nobrega and an excerpt from an interview with Suassuna.

Previous: Professor makes a historiographic analysis of Covid-19
Next: As in the Backyard Times