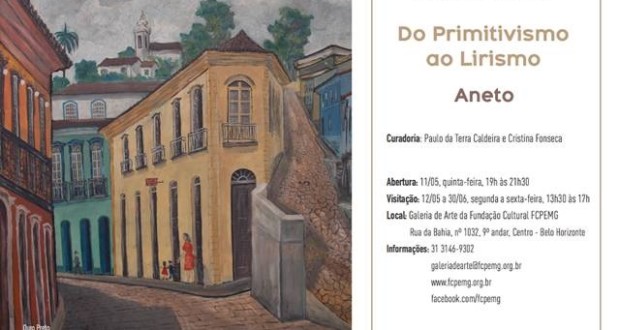 Exhibition of Primitivism to Lyricism. Disclosure.

The exhibition From Primitivism to Lyricism seeks to delineate the route, the selflessness and overcoming of Dill in your personal life and artistic. The painter, recognized as a faithful disciple of Guignard, features 30 works in different formats and techniques, covering your trajectory in the area, influenced by their backgrounds and experiences, reflected in nearly eight decades of painting. The curator of the exhibition is signed jointly by Paulo da Earth boiler and Cristina Fonseca. The art gallery of FCPEMG Cultural Foundation is located at rua da Bahia, 1032, 9º andar, Center – Belo Horizonte. The visitation period will be 12 of May to 30 of June, from Monday to Friday, from 13:30 (h) 17:00 hours.

Aneto (Antônio Augusto Neto), is the painter of works involving the glance of his admirers. Theme recreates, among other reasons, Dreamlike landscapes and historic towns and Misty inside miner, presents diverse typology of everyday life of human figures and memories of circus shows watched in your childhood which are enshrined in its fabrics. His admiration for the master Guignard and his works with and strongly influences throughout your walk.

Of humble origin, Dill was born in 13/06/1933, in Diamantina, mining town holds important baroque architectural and artistic heritage. With a life of hardship, came to live in the asylum Childhood protector, lost your mother and early, without many options, to relieve misfortunes and misadventures, at the age of ten, awakens interest in art to the paths of art, When drawing and later, use screens, paints and paintbrushes to record the routine of residents and the landscape of where he was born. In 1946, the transfer to Belo Horizonte and play numerous activities such as janitor, waiter and sportsman in military police, He obtained employment as a driver in the engineering school of UFMG, where he remained until retiring. With the admiration inspired by your work and the encouragement received from that institution attended, between 1951 and 1959, the painting classes taught by master Alberto da Veiga Guignard, in art school of the Municipal Park (current Guignard school). On the Park School, Dill was a colleague of Álvaro Apocalypse, Chanina, Stephen, Gavino Changed Son, Turikumwe, Maria Aparecida de Carvalho, Sara Avila, Solange Botelho, Vicente de Abreu, Vilma Martins, Velma R, Wilde Lacerda, Yara Tupinambá, among other renowned painters. As a natural consequence, participated in art exhibitions, receiving awards, with emphasis on the Honorable mention awarded by the works exhibited in the Salon of Arts X Belo Horizonte (in 1955 and 1956) and numerous individual and collective exhibitions, highlighting the individual in Gallery Guignard: Twenty-five years of art of Aneto (1979) and the collective homage to Guignard promoted by BDMG Cultural Art Gallery: The city and the artist: two centenarians (1995) and View and to see: the city of the students of the master Guignard (2012).

According to nostalgic art criticism, Maristela Tristão, asked if between students of Guignard was there any that she considered more faithful to the master, She replied: “Had. The Wilde de Lacerda. Got dill, It's very Guignard. It's not that mimic, is influence”. In the same period, Yara tupinambá promised that "… inspire is not copy"and you"… at that time, the influence was the knowledge of Guignard. Not his art. Some were like…”.

Controversy aside, the important thing is that some of his works convey enormous tranquillity to visitors while others reminiscent of your childhood, due to unusual situations, shown in his paintings, which may be conferred on this show.

Previous: New book from a writer in an atmosphere of Mining season of autumn
Next: The CCBB Rio open, in 15 de Mayo, at 18h, the exhibition "Yes! We Have Bikini "