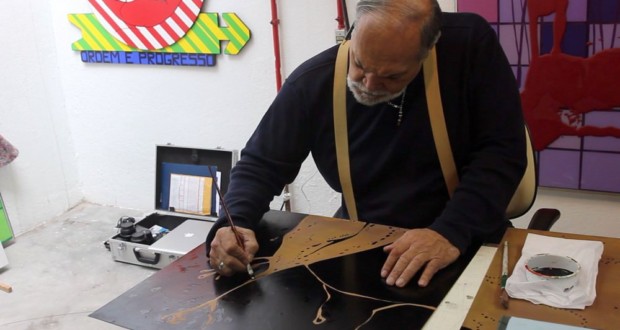 Artist Gilberto Salvador, known for daring to express your, in public works, your posture and policy reflections in environmental issues, inaugurates day 10 of August the exhibition "Water + Strong ", at the Museum of contemporary art in Campinas.

The Contemporary Art Salon of Campinas had great importance in the history of the arts in the 60 and 70, and along with the national salon in Rio de Janeiro and São Paulo biennial, was a milestone in the production of plastic arts in our country, qualifying references more expressive of this period.

Constant presence in this collection, the Museum invited artist to perform the solo exhibition "water + Strong ", which carries the subtitle "Life".

The curator, made by artist, selected a core of large metal engravings on the theme of water; a set of Monotypes engravings benchmarks; a set of watercolors and an installation called "Swimming Poll". The exhibition will cover the entire exhibition area of the MACC.

"I understand that the essential element of life on our planet Earth is the water, and it was with the intent to honor her that come in the last 10 years, developing a series of works that affect this issue, whether in sculptures that use the seeds and the vital significance in your midst with the water; or in engravings, watercolors and paintings with various settings ", said Gilberto Salvador.

This is not the first time that Gilberto Salvador has his works exposed in Campinas. In 2014, the artist opened the sculpture ‘ Royal ’ Victory, in the quarry of Chapadão, that is in place until today.

The idea of holding this exhibition at the Museum of contemporary art in Campinas follows a proposal of internalization by the State of São Paulo, proposal by the artist.

Architect and University professor, Gilberto Salvador stood out for his restless spirit, the formal innovation and by a singular boldness to put the aesthetic issues based on a solid knowledge of the social and ecological issues. In this way, very young, held a series of jobs using icons of mass society, from the comic books and commercial communication, but critical character manifest, that caused commotion for his political and formal content.

The artist progressed in the areas of painting, sculpture, watercolor and printmaking, performing a deep reflection about environmental issues, being a Brazilian in pursuit of ecological awareness and the understanding of our world as a living being and interdependent inhabitants.