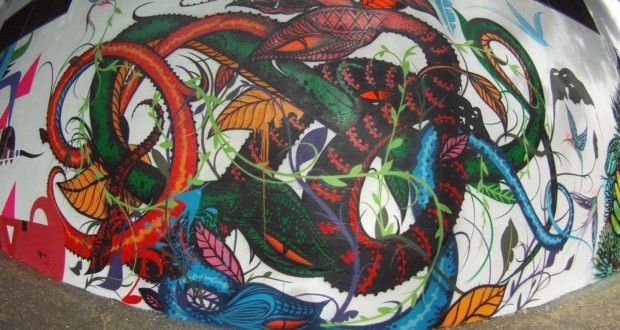 Wall made by Boleta street in São Paulo. Photo: Disclosure.

Rookies of the Cultural Pack gallery in 2009, the Boleta NDRua and artists occupy the space again with old and new works, showing the resilience and evolution of street artists in Brazil. The exhibition, which is curated by Juliana Akina, opens on 13 June and it is up to day 7 July

São Paulo, June 2019 – Continuing the celebration of 10 years of existence and Cultural resistance Pack, on 13 of June (Thursday) multicultural house is occupied by exposure Boleta + NDRUA – 10 years later, curated by Juliana Akina. The traditional Sao Paulo street performers were the rookies the Pack Gallery in May 2009 and return to the site with new and old works, emphasizing the resilience and developments that perpetuate their universe and how they live art at this juncture. The opening event will take place from 19h and the show will last until March 7 July.

A decade ago the Cultural Pack argues that knowledge belongs to everyone, aiming to expand and intensify independent culture, the debate on human rights, the protection of animals and protection of the environment. Along 2019 has reinforced his speech with music releases, exhibitions of independent artists that dialogue with the streets, film screenings that strengthen the national audiovisual scene and several discussions on issues that permeate the evolution and expansion of humanity.

Born and raised in the capital São Paulo, Boleta the self-taught graffiti found in his art. With elements of a universal symbolism, his works are marked by the presence, mainly, of cobras, birds and skulls. Taking the first two one predator and victim relationship, the artist gives, the bird, the place a magical vitality that powerfully expands. Already the snake occupies the contraction of space also seeks balance, referring to the symbol pray Boros and Moebius strip, symbolizing infinity and also harmony. And the skulls reinforce the idea of ​​rebirth and overcoming adversity in a holistic thinking, where life and death walk in communion.

Boleta started in street art in the late 80, as pixador focusing on words and letters. He participated in the alphabets of war, signatures, charts poems, starring by groups occupied with his writings all public spaces of the city. His first contact with the graffiti was 1994 and its organic and psychedelic style reveals study and influence of many styles and tattoo schools. The trajectory of the artist is noticeable evolution of spiritual and psychological nature in his works, which resembles the metaphor of the snake and bird.

Student of the streets of Sao Paulo, Jorge Frederico, known for NDRUA is representative of the culture "no-dorminiana". Was born in 1981 and there are over 15 years his arts draw attention by the city's murals. Cicatrizou not Street art in various styles, always influenced by piracy and illegal distribution of art and knowledge. NDRUA believes his career is proof of the value of school life on the market of culture and education officer. To create his works and develop walked and follows the learning for most gallery: the street, where nothing is old or has time action.

Previous: New cultural center in São Paulo by Edmundo Cavalcanti
Next: A2 Angelo Aquino + Mul.Ti.Plo, in the Valley of the Vines