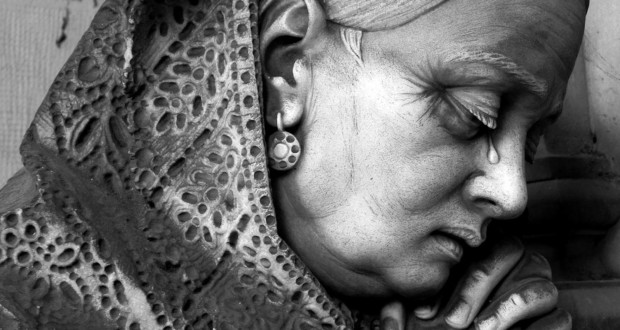 "Images of a longing", photographers Luciana Fatima and Arlindo Goncalves.

A Museu de Arte Sacra de São Paulo – BUT/SP, institution of the Department of Culture and Economy of the State of São Paulo Creative, displays "Images of a longing”, photographers Luciana Fatima and Arlindo Goncalves and curation of Vanessa Bortulucci. In 21 images that make up the show, They are exposed one of several attempts of man to preserve the memory of the departed: "The nostalgia has no relation with the void. Unlike, it is a full memory space, pulsating and turns all the time ", curator defines.

This creative cultural segment is a little-studied field and underrated, but already several specialized artists, worldwide, on his record as a heritage to be preserved both for its artistic value as historical. The set of photographs, in black and white, displays significant cuts; selected images depict the necessary delicacy, strength of the materials used. “…stones that are meat, fabric, foundation, sound, breath, dream and imagination, "says Vanessa Bortulucci.

The funerary art is a creative representation that seeks to provide a re-interpretation of the contrast between life and death. In preparing the statues, their visual codes are composed of sets of symbols or narrative works produced with the most diverse materials such as marble, Granite, iron and bronze. These works begin to be seen as works of art, since these works have a strong artistic bias, cultural and museum.

The sensitivity of the sculptor is an indispensable factor in trying to convey affection through the work embedded in stone. "In each sculpture, there is the honor of the living to the living - for only to them is reserved the task, sweet and terrible, to remember ", says curator.

"How beautiful can be the representation of a pain? can, because she was a last homage to someone who was loved ".

A Museu de Arte Sacra de São Paulo, institution of the Department of Culture and Economy of the State of São Paulo Creative, It is one of the most important of its kind in the country. It is the result of an agreement signed between the State Government and Mitra Archdiocese of Sao Paulo, in 28 October 1969, and its installation date 28 June 1970. Since then, the Museu de Arte Sacra de São Paulo He came to occupy wing of the Monastery of Our Lady of the Immaculate Conception of Light, on Avenida Tiradentes, downtown São Paulo. The building is one of the most important monuments of colonial architecture São Paulo, built of rammed earth, rare remaining example in the city, last farm convent city. It was listed by the Historical and Artistic Heritage Institute National, in 1943, and the Council for the Defense of Heritage, Architectural artistic and the State of São Paulo, in 1979. It has much of its collection also listed by IPHAN, since 1969, whose priceless heritage includes relics of stories in Brazil and worldwide. A Museu de Arte Sacra de São Paulo holds a vast collection of works created between centuries 16 and 20, counting with rare specimens and significant. There are more than 18 thousand items in the collection. The museum has works of recognized names, as Frei Agostinho da Piedade, Frei Agostinho de Jesus, Antonio Francisco Lisboa, the "Aleijadinho" and Benedito Calixto de Jesus. Noteworthy are also the collections of nativity scenes, silverware and jewelery, Lampadarios, furniture, altarpieces, altars, clothing, liturgical books and numismatic.