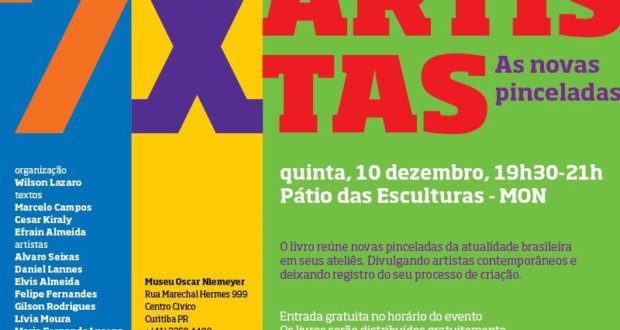 Releases: 10 /12 in the Oscar Niemeyer Museum (Curitiba) and 12 December at the Imperial Palace (River)

7 X ARTISTS – The New Strokes It presents the production of seven painters of contemporary Brazilian art. The book, which is organized by Wilson Lazaro and features the art direction of Felipe Taborda, shows the experience of artists in the studio and its production processes and the works that accredit its production in the last decade.

Alvaro Seixas It was indicated for the prize Pipa 2018, and develops, throughout his career, works that explore abstraction in painting and how that language relates to the current artistic-cultural panorama; Livia Moura is an artist who has been developing a research paper of the current women's issues, currently participating in a residence on the island of Cyprus, with a comic painting that is totally feminine;

Gilson Rodrigues He is an artist miner, intense promotes research on their own and make pictorial recurs his research on issues related to time, to memory and landscape; Felipe Fernandes It is occupying a place between figuration and abstraction, painting that develops is fused to delicate paper petals, pieces of masking tape and unforeseen layers of glue Collating gloss ink; A painting Daniel Lannes It has scenes documentary or imagined, historical or banal that are merged without hierarchy - characters (heroic or not, real or not) last century living together in the same scene contemporary, wherein different times coexist and are constant compositions surreal. It was one of the winners of the 6th edition of the Marcantonio Vilaça Prize for Plastic Arts 2017/2018; Elvis Almeida, with a painting well known for its palette of electric colors and well-defined visual vocabulary, uses organic shapes in a figuration that just creeps, while referencing the popular imagination of the great urban centers; Maria Fernanda Lucena, is carioca , in several solo exhibitions with curriculum emotional Landscapes C. Gallery - Rio de Janeiro in 2016; Intimacy is a choice in Gallery IBEU - Rio de Janeiro in 2017; Melancholy landscape in Untitled Gallery - Fortaleza among others.

"Seven styles, seven records of some of the trajectory of contemporary painting, focusing on artists, processes and works. More than ever, transience in times of social networks, seems to be necessary to set the story in a product that reflects the production of artists who are building the Brazilian art of the XXI century, "says Wilson Lazaro, book organizer.