Home / Art / ANNEX schedule shows what was not seen

Enhanced and reworked in quarantine, works gain light at the turn of a year full of peculiarities

“This was a year that seemed to go on forever: canceled projects, endless months, mismatched and breaking news two troubled elections: one local and one international. Now, with Almost End, the Annex CANVAS sets out to end 2020 with a sample of the works that missed the opportunity to be seen. The invited artists have in common in addition to the persistence of the work in the studio, postponed and canceled projects ”, explains Duilio Ferronato. Drawings, paintings, videos and sculptures on display, exhibit an outline of that creative period in confinement.

Clara de Capua reflects on the memories that fade and end up leaving a hole in the memory while Daniel Mello develops research through gestures, where the movement of the hands and arms makes the support reveal intense colors and shapes. Irene Warrior keeps his eye on the transformations of nature, but this time also with extra attention in the empty spaces; Higo Joseph, which also works with large open regions, keeps spaces on paper to be filled. Gabriel Pessoto draw, fold and sew papers in an attempt to reveal discussions of the place of mankind and Gabriel Torggler sculpt small pieces and place them in a blue landscape, like a great sea. Maria Luiza Mazzetto, inspired by living organisms, fills the paper in an intuitive way but with biochemical elaboration creating a visual effect that transforms the visitor into a hypnotized being.

The proposed Almost End is to finish off 2020 with colors, shapes and good mood!

“We updated our turning points. We will leave 2020 to be counted as a painful and difficult year, but that at the same time provided us with time to reorganize issues that the daily routine postpones ”, concludes Duilio Ferronato. 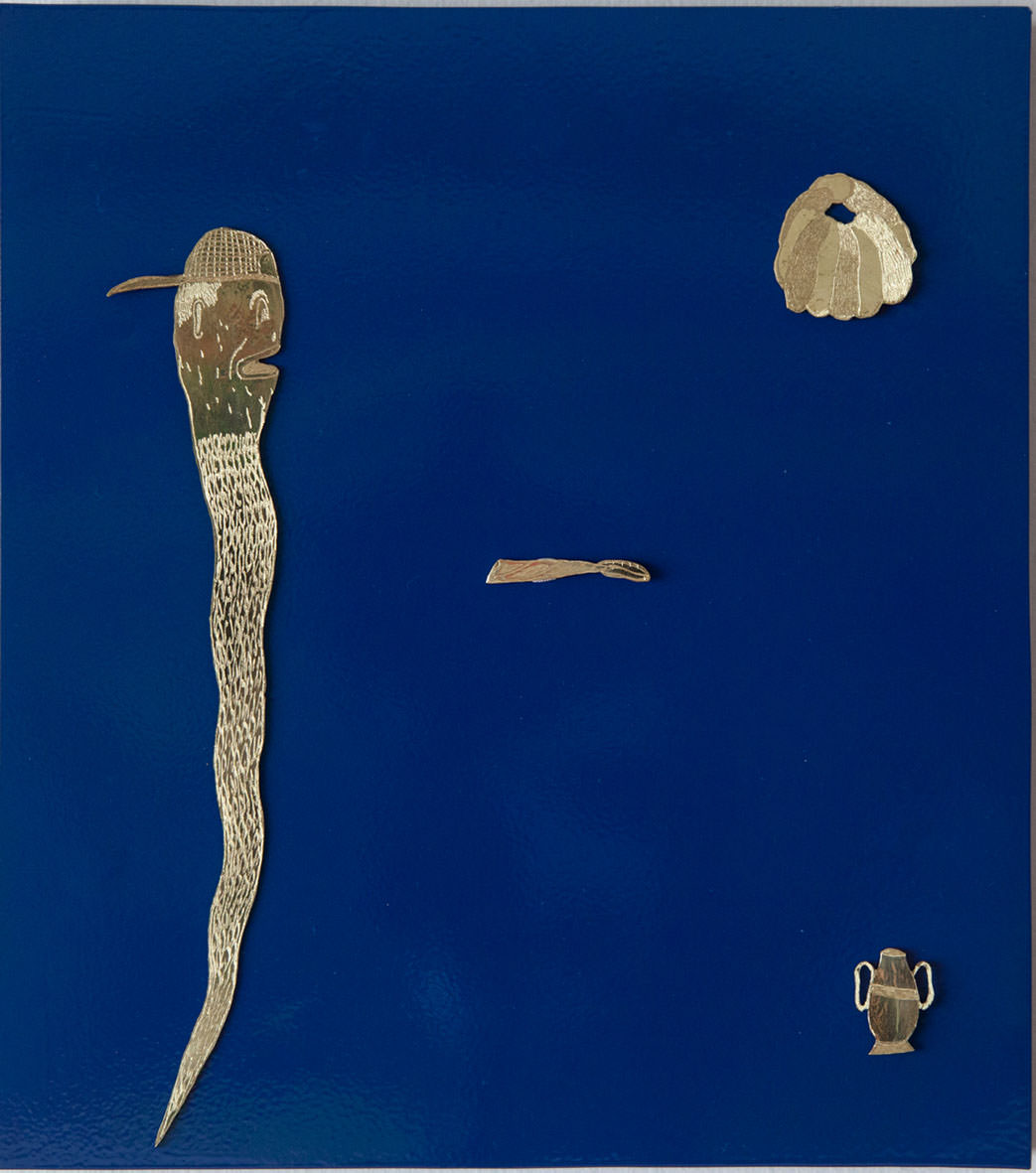 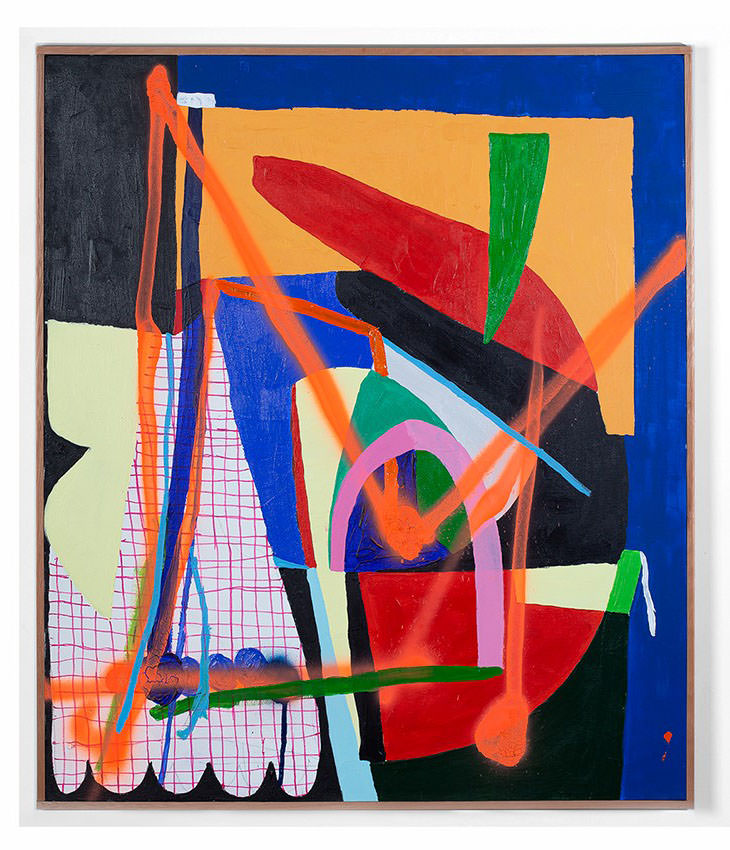 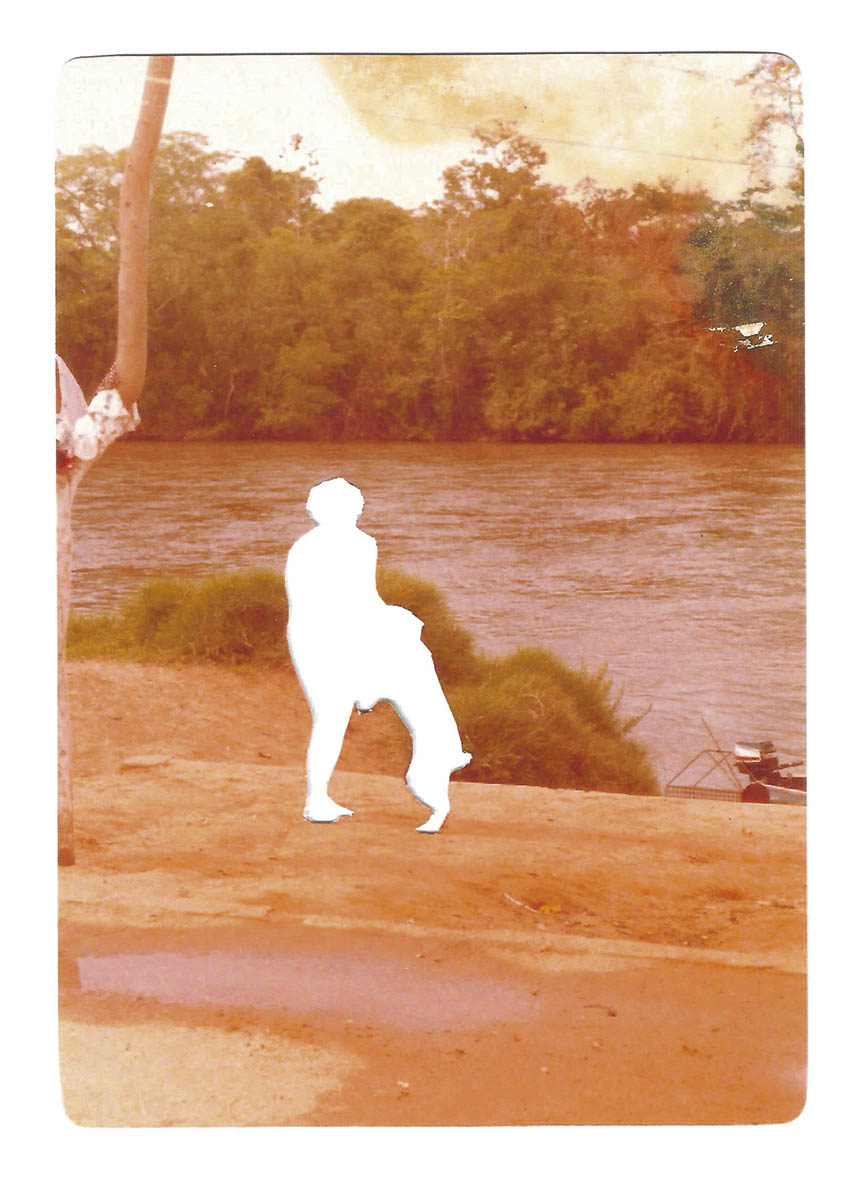 A little history of the isolation of each one:

Clara de Capua — This work is part of a project developed after the death of his father, in August 2019. In a series of works, seeks to reflect on the limits between presence and absence. About a selection of personal photographic archives - photos taken by the artist's mother between the years 1970 and 1980, in GO and MT - small interferences are performed. The father figure is cut out in each of the scenes.

Daniel Mello — Series of abstract landscapes where you explore the illusion of depth on a two-dimensional surface. The painting takes place in overlapping layers of paint and its narrative is constructed through the process of creating and transgressing geometric planes. Combination of different shapes, graphics and materials.

Higo Joseph — The sculptures seek inspiration in megalithic monuments, like menhirs and dolmens, erected by different cultures and periods, from the paleolithic to the century 19. My watercolor and painting works seek reflections related to the limits, clashes and approaches, exploring the distribution of shapes in space.

Irene Warrior — Color and nature are the main subjects of his poetics in oil or acrylic paintings on canvas and collages on paper. Living in a tropical country with colorful views and bright light has a significant impact on work, beyond the psychedelic movement of the years 1960. Starting at an equidistant point from which it is possible to adjust a focus on the external and internal nature, concomitantly, makes cutouts that form dreamlike landscapes.

Gabriel Torggler — Proposes an attempt to highlight some characters contained in the drawings that often go unnoticed, devido ao acúmulo de informações no papel, and small objects that are often trivialized by supply saturation. I use brass and stainless steel in order to emulate valuable metals like silver and gold thus creating a game of values.

Maria Luiza Mazzetto — Build organic worlds. Drawing on paper, creates great landscapes or landscape fragments that could say about the bottom of the seas or the interior of a living organism, including the proliferation of fantastic societies. Starting from the drawings, now try gluing, animation and biscuit. For the artist, living organisms, so much animals, how much vegetables or microorganisms are visually similar in their internal and external structures, showing the proximity of the human being to his natural surroundings. 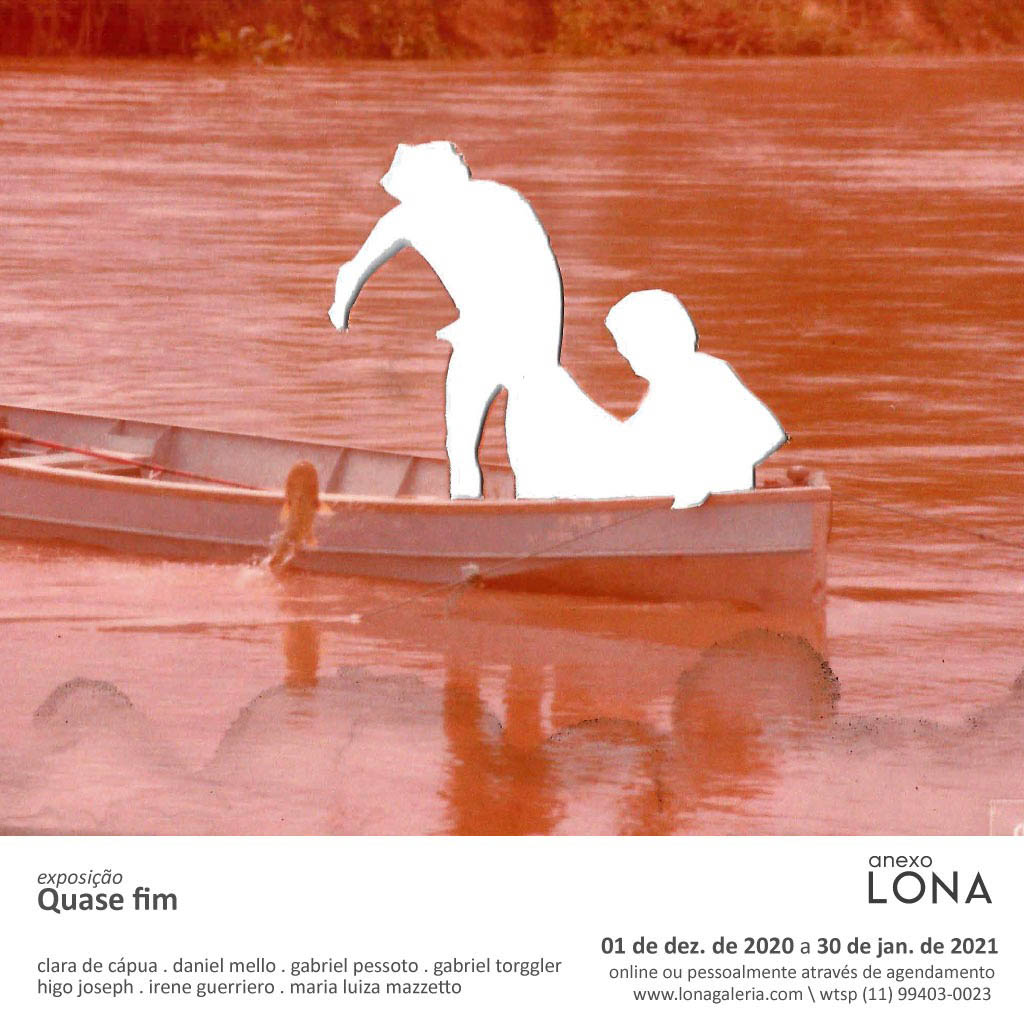 The CANVAS Gallery opens its doors in Barra Funda in March 2019 – a partnership between the curator Duílio Ferronato and the artist Higo Joseph. Focusing on new and rising artists, with artistic and market potential, a galeria apresenta exposições individuais e coletivas, produced through partner curators. It has two spaces: um sobrado no bairro da Barra Funda (gallery) and space on the first floor of a historic building in downtown São Paulo (Annex). Its mission is the insertion of emerging artists in the circuit and a first contact with the market and art institutions, as well as encouraging new collectors

Clara de Capua – his work develops between the performing and visual arts. Graduated in Performing Arts (2006) and Master of Arts (2010) by the State University of Campinas (UNICAMP), studied the image as a support for the work and for the reflection of the actor, with financial support from FAPESP (Brasil). In 2020, was an artist invited by the Museum of Sexual Diversity to integrate the virtual exhibition Queerentena; as well as by Lona Galeria to participate in the video art exhibition Gable in Quarantine. Still 2020, participated in the XV SIMULTAN Festival (Timisoara, Romania), of the collective video art exhibition Brazilian Body, exibida on Hošek Contemporary (Berlin, Germany) and in the Flying Suitcase (Porto, Portugal). In 2019, was a resident artist in Short day AiR (Ólafsfjörður, Iceland), exhibiting at the Skammdegi Festival; participated in the international video art exhibition Tehran-Sao Paulo, exhibiting at Canvas Gallery (São Paulo) and in the Platform gallery 3 (Tehran, Iran); and was an artist selected to compose the III Mostra Diversa, organized by the Museum of Sexual Diversity (São Paulo, Brasil). In 2018, collaborated with the collective exhibition AI5: Not finished yet, in Tomie Ohtake Institute (São Paulo). In 2017, integrated the artistic residency Brashnar Creative Project (Copy, Macedonia) and participated in the group exhibition Our Small Global Neighborhood, no Cultural Center Gjorce Petrov, in Macedonia. As an actress, acted in the feature film The Good Manners (Brasil, 2017) and was a member of MiniCia Teatro, acting in shows Accusation to an actress, of which she is also co-author, and Better not to bother her.

Currently lives and works in Balneário Camboriú. Understands the crossings of the city and human occupation as the initial observation in the construction of his narratives. Mainly uses acrylic paint and oil on canvas, waste paper and wood in the production of their works. Sua pesquisa se desenvolve na pintura abstrata explorando as relações e ressonâncias produzidas cores, shapes and textures in a constant process of construction and deconstruction.

Lives and works in São Paulo. He is a multidisciplinary visual artist, graduated in Multimedia (2014) Visual Communication (2016) by ETEC- SP and studying Visual Arts at Faculdade Paulista de Artes. Selected artist of the project season 2020 of the Paço das Artes. 182nd edition of the Exhibitions Program 2020 | MARP and the 48th Luiz Sacilotto Contemporary Art Salon. In the last 4 years has participated in several exhibitions, with emphasis on individual; Beyond the phallic universe (2019) on Canvas Gallery and Cinema Lines (2018) at CineSesc. And the collective; IV Sertão Biennial (2019) II Different Exhibition (2017) at the Museum of Sexual Diversity, and Loneliness (2017), in the same museum. Burgos (2017) at Funarte, SP. Portfolio #3 (2017) in the More Art Gallery, Lixuosity (2016) at Studio Blade and 18 in the collection (2015) at Casa da Luz Cultural Center, also in São Paulo. Participated in residences; Funarte Shed (2017) Blade Studio (2016) and Atelier Amarelinho da Luz (2015)

Lives and works in São Paulo. Graduated in Plastic Arts at FAAP- Fundação Armando Álvares Penteado, in 1988. Participated in the Hermes Artes Visuais project monitoring group from January to May of 2020 and is represented by Lona Galeria de Arte. In 2020 was selected to participate in the 18th edition of the MARP exhibition program- Ribeirao Preto Art Museum, participated in the exhibition Penance, organized by Lona Galeria for SP-Arte, of the exhibition “Ressetar” at the Museum of Sexual Diversity, in São Paulo, of the Plant Section, Hermes Visual Arts, Ch.ACO, Santiago de Chile and the Casulo International Online Exhibition (Capullo/Coccon), Confluences of Art. In 2019 participated in the collective exhibition “Dá Pra Levar” in the Annex Lona. In 2018 participated in Artbox Projects New York 1.0 and the Eixo Contemporâneo Collective at Fabrica Bhering in Rio de Janeiro. In 2017, participou da exposição “Spanic Heritage”na Pfizer em Nova York, NY- USA. In 2016 executed the project of the permanent panel in a listed building (Nigri Plaza) in Rio de Janeiro. In 2005 participated in the Art Salon at Casa de Portugal, among other group exhibitions. His work is part of the collection of the Museum of Sexual Diversity in São Paulo and of several private collections in Brazil, United States and Europe.

Studied Audiovisual Production (PUCRS) and started the Visual Arts course (UFRGS). From 2015, started to exhibit works in group exhibitions and was contemplated by the Porto Alegre City Hall notice to occupy Galeria Lunara, where he set up the installation “Glória” in partnership with Filipe Rossato, nominated for the Azorean Visual Arts Award in the category Featured in New Media. In 2016, presented the exhibition “Trégua”, first individual experience, and developed the artistic residency project “Variations on contact: views ”at Casa13, cultural space in Córdoba, Argentina. In 2017, He moved to São Paulo, where she attended the group of artistic projects monitoring Hermes Artes Visuais. In 2018 held his first solo exhibition in São Paulo, “A little a day is enough” at Casa da Luz cultural center. In 2020, participated in the residency program “We have vacancies!” do Ateliê397, was awarded by ArtConnect Magazine for the project “exchanging stickers” developed in partnership with Nicole Kouts and had a work incorporated in the collection of the Museum of Sexual Diversity. Trabalha também como produtor da mostra de vídeo Festivau de C4nn3$ que já conta com 12 editions, the last being completely online.

Graduated from the BA in Fine Arts at FAAP in 2012, uses drawing as the main technique in its production. Participated in exhibitions like Video Brasil (2013/2014) at Sesc Pompéia and also at the last edition of the EDP award at the Tomie Ohtake Institute(2015). In 2017 made his first individual ‘‘ Machine Failed ’’ at Galeria TATO. In 2019 was selected for Paço das Artes Project Season 2020 where will hold an individual. Lives in São Paulo and works in his artistic production and as an art educator.

Lives and works in São Paulo. He graduated in architecture from Mackenzie , studied dramatic arts at Célia Helena, Art history with Renata Pedrosa, illustration with Laura Teixeira, Fernando Vilela and Odilon Moraes, readings and writing about her process in arts with Nancy Betts, Sandra Lapage e Carlos Pileggi. Participated in project monitoring groups with Mônica Rubinho, Sydnei Philocreon and at Hermes Visual Arts, with Nino Cais, Carla Chaim and Marcelo Amorim. Integra, along with others 7 artists, the Go Independent Art Space. Participated in some salons like SARP and Salão de Arte de Jataí- GO, as well as some group exhibitions. Held 3 individual exposures: Demand, no something, in partnership with Hermes Artes Visuais, Interstitial, in the Sala da Praça and Inside the Body, during the Paço das Artes Project Season in 2019. His work starts from the observation of living nature. This observed nature goes through reinvention processes, resulting in images-fiction.

Previous: Contemporary decor: Know the main steps to develop it in your home
Next: The creative flows of the renowned carioca artist Suzana Queiroga in video of the Na Memória project, from MNBA, Friday, 4 ten