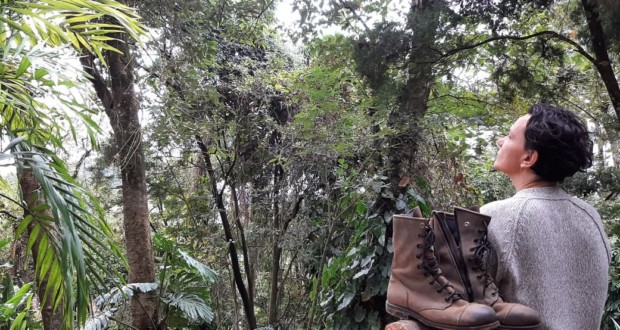 Awarded with the Zé Renato Theater Award in the City of São Paulo in 2019, the show BAKER'S STORY would arrive on stage in May 2020, but due to the pandemic and the closing of theaters, its premiere was postponed. From the name Baker, mounting, thought of as a sensitive-poetic appeal to re-evaluate, revolver, rediscover how the colonial device acts, win free virtual presentations on the digital platforms of various cultural facilities in the city of São Paulo.

The montage walks through the history of colonialism, of capitalism and exploitation, in addition to the various forms of necropolitics and autobiographical elements brought by Cristiane Zuan Esteves. In front of several directions, mainly with the OPOVOEMPÉ Group, the actress returns to acting, after almost twenty years, on a personal project.

BAKER'S STORY crosses many other Bakers – Josephine Baker, the Baker Bomb on Bikini Atoll and Baker Island, among others – to reflect with humor on our position as devourer or devoured, colonizer or colonized. From this, Cristiane Zuan Esteves asks: we are all cannibals?, since in the piece the artist seeks to reflect on the facts that plague the victims of colonization until today.

"It is fundamental at this time, to know these facts erased from history to think about what we are experiencing", she says. in the assembly, the two artists investigate cannibalism not quite as a practice, but as a european invention, a discursive device of the colonial power that intends precisely to deprive of humanity those whom it wants to oppress, enslave or simply eliminate. “In research, we find in countless examples cannibalism as an excuse for the domination and enslavement of peoples”, advances Beto Matos.

Working with viewer involvement, to which the actors directly address, BAKER'S STORY transits between the tragic and the ironic. in the assembly, scenic devices - cameras, computers, cell phones and lights – are revealed and documentary materials are treated in an elliptical way, where all the elements are absent or to be revealed: photographs that are partially seen, interrupted audios, videos without soundtrack. So, materials reveal or hide, amplify or omit part of the information they carry, revealing several possible narratives of the same fact. The narrative plans are directly or indirectly linked to the name Baker.

Given the current conditions of the pandemic, the show originally planned to take place in a theater, was transferred to the directors/actors house, since they are a couple in real life. Due to social isolation, the creation of the show blended into their daily lives.. With temporary housing in a house with woods and yard, the couple lived the restrictions of breeding alongside their six-year-old daughter and their dog Zé, that were incorporated into excerpts of the work.

Amidst the environments of the house, various times and spaces intertwine and fiction and documentary material are mixed. A hybrid show, that uses different resources: personal testimony, conference piece, video clips and pre-recorded audio. BAKER'S STORY has a soundtrack, scenarios, light and video material specially designed remotely by the guest artist team. Camera manipulation takes place live by the actors.

The initial project was born when Cristiane Zuan Esteves found the story of Thomas Baker, English missionary killed and devoured by the Kai Colo during the colonization process of Fiji, fact by which the descendants of the supposed “cannibals”, today converted to Christianity, held an apology ceremony in 2003. “The fact that colonization victims apologized to their invaders impressed me and was very indignant. I decided that one day I would do a job about it", she says.

Given this, the artist researched the name Baker and everything she collected was placed in a folder called Os Canibais, forgotten in your files. Ten years after, in 2013, Cristiane Zuan Esteves discovers calcifications similar to small teeth in her knees, in the so-called Baker's Cyst. "I felt like a call to do the job. Devoured Baker Resurfaces".

Developments during the pandemic

Early in the pandemic, Cristiane Zuan Esteves was selected to present a part of the montage in the online version of My Documents, Lola Arias project, performed by the Mousonturm Frankfurt, Germany.

To keep the project alive in long isolation, the play's artistic team decided to unfold the work's themes in a webseries called The Baker Chapters, which totaled 10 episodes, presented between September and November 2020. in each chapter, Cristiane Zuan Esteves and Beto Matos presented an artistic-documentary report on one of the themes researched for BAKER'S STORY. After the virtual presentation of each chapter, there was conversation with a guest.

Among the guests highlighted by Denilson Baniwa, one of the most important contemporary artists of today for breaking paradigms and opening paths to the role of indigenous people in the national territory; Jaider Esbell, founder of the Jaider Esbell Gallery of Contemporary Indigenous Art, located in Boa Vista, capital of Roraima, the first in Brazil focused on the production of indigenous peoples; Angelica Ferrarez, historian, Professor, black feminist and researcher of the history and memory of black women and Samba; Marcia Mura, of the Mura Indigenous People, doctor in social history from the University of São Paulo and master in society and culture in the Amazon, by the Federal University of Amazonas and David Popygua, leader of the Guarani People of the Jaraguá Indigenous Land.

For Beto Matos, The Baker Chapters served as a immersion in the research for assembling the piece and also as an introduction to BAKER'S STORY. “It will make perfect sense if the audience that could follow the episodes, see this online version of the assembly", he says. The 10 episodes from the webseries continue online on the Baker's Story YouTube channel [youtube.com/AHistóriadeBaker].

Days 9, 10 and 11 July, Friday and Saturday, to 21 e domingo, at 19h, on Facebook at Teatro Paulo Eiró [facebook.com/teatropauloeiro].

days and 23, 24 and 25 July, Friday and Saturday, to 21 e domingo, at 19h, on Facebook at Teatro Cacilda Becker [facebook.com/TeatroCacildaBeckerSP].

Previous: Pedro Longes releases latest single, 'Horses in the Bedroom', that anticipates her new album Sinestesias
Next: How to Keep a Dining Room Beautiful and Well Decorated?