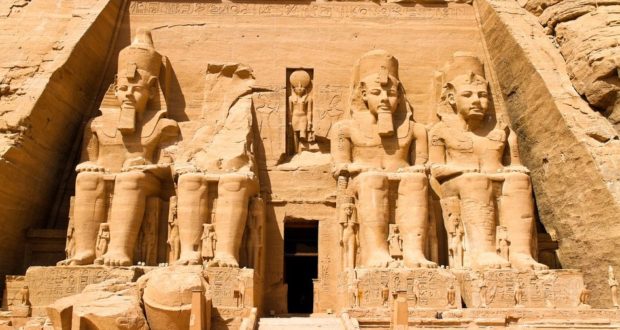 The Egyptian Art by Rosângela Vig

Painting is the glamorous shock of different worlds designated to create, in and for battle, the new world called work of Art. Each work is born from the technical point of view exactly as the cosmos is. And from the chaotic, rustle of the instruments, they create a symphony called the music of the sphere. The creation of a work of Art is the creation of the world. (KANDINSKY, 1991, p.92)

This thought poetically translates what the creation of the artist provokes on the spectator: The reproduction of a peculiar universe, where the thoughts, the culture and the way of living are inserted too. There is no doubt that through the contemplation of Art, the pleasant feelings for the shape and for the color are involved, but while enjoying it, the person is in contact with more than this, and materializes this world before him. Much is known about, the prehistoric people from cave paintings. Likewise, part of the Egyptian Cuture is printed and was revealed from their Art. From their legacy there are habits, religion and values from one of the main civilizations of the Ancient History, that lived between 3200 and 1085 b.C., on the Nile, in the North of Africa.

The religious reasons that conducted the culture of this people are evident, for example, in the Pyramid of Giza, raised in the Ancient Kingdom, around 2200 B.C.. Such constructions,

Were mortuary monuments which symbolize the stair that leads the Dead person straight to Ra, the god of Sun. With the, expectation that life would be the same after death, the Dead was buried with food, jewels, boats, papyrus prayers, furniture, cattle and slaves. If passed through the Judgement of Osiris, the Pharaoh and his accompaniment would continue existing indefinitely in Another plan. (GOLDBERG, D’AMBROSIO, 1992, p.59)

These monumental chambers sheltered the remains of the pharaoh, who believed that the religious rituals would grant the happiness after life. The objects, that belonged to the dead were left together with the bodies. In the New Kingdom, around 1500 b.C., in order to show the power of the Pharaohs, the Temples of Luxor and Carnac were built, dedicated to the god Amon; and the well-known Temple of Abu-Simbel (fig.1), dedicated to the Godess Hator, representative of love and beauty. 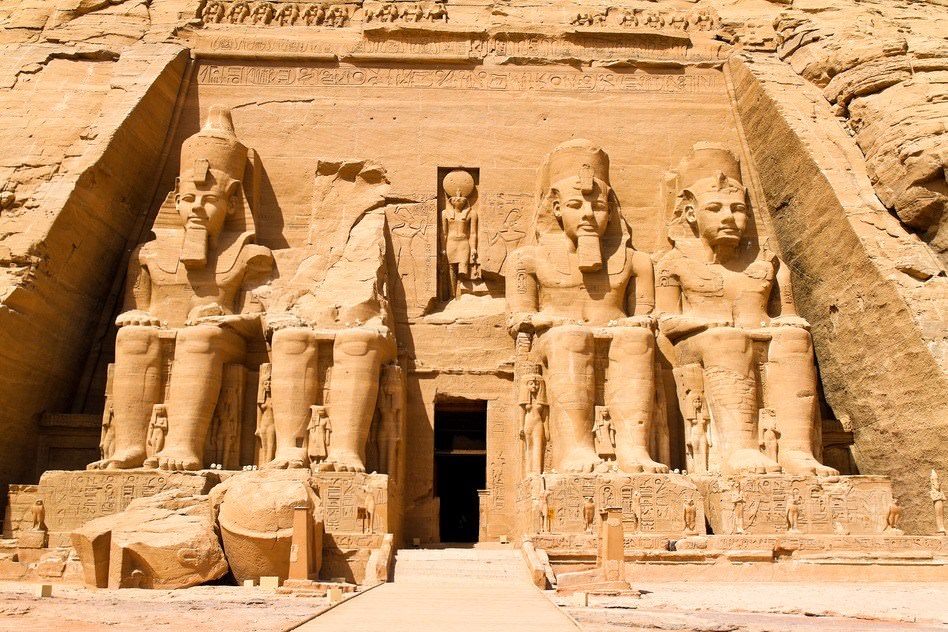 In the painting, there was a kind of regularity of geometric combination and nature observation. In the figure there, can be seen the Law of Frontality, it means, the bodies of the people were drawn in a frontal plan and their heads in a lateral plan. The people are presented bidimensionally, with stylized and angular shapes, with simple and straight outlines, without concern about the perspective and depth, what can narrow the angle of vision. Another detail is about the female figures which were painted in ocher and the male ones, in red. The use of strong colors, and the details bring, the picture closer to the reality. The objective was a solemn Art, made to the eternity. Some traces of the Egyptian Art were outstanding in the Cubist Art, such as the elongated people and the straight lines, seen in Les Demoiselles D'Avignon. The hierarchy has a significant meaning in the Egyptian Art, since the most importante people of the kingdom were represented bigger than the others, being first the Pharaoh, then his wife, his priests, the soldiers and the people.

Another important aspect of the Egyptian Art is the use of Lapis Lazuli stone, considered the stone of the Pharaohs. It was appreciated for being of an unspeakable beautiful dark and opaque blue, and represented, the water, symbol of life and therefore, the purification and regeneration in Other World. The objects, amulets, jewels and scarabs made from the stone were left together with the bodies. The stone was also crushed and powdered on the eyes of the dead and the eyes of the egyptian ladies as make-up. There are also recordings of paintings with Lapis Lazuli on the tombs and on the murals of the Ancient Egypt. Later on the Middle Ages and on the Renaissance Periods the use of the stone by the artists, raised with the objective of making Strong blue pigments. 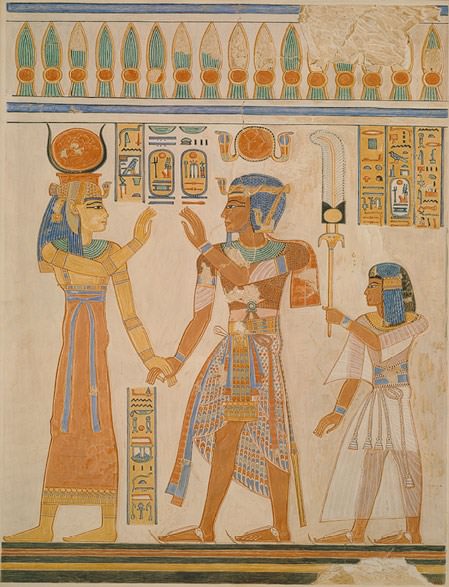 Even the painter, and the sculptor, led by the hands of the Christianity, were ordinary anonymous workers. Their Job was subservient and their personalities could not be underlined. Just a few names are known and, since they didn’t subscribe their Works, it is difficult to link the Works and their authors. Some of them who showed more ability, worked for the pharaoh and could even have their tombs decorated.

Part of the magnificent treasure of this Eastern Civilization has been robbed, but much of their History and Culture, has been confirmed after the excavations of the end of the 19th Century and the Discovery of the Rosetta Stone in 1799, which was fundamental to understand the hieroglyphs. On this matter, in this sense, as a mechanism to show ideas and, notwithstanding the personal values, the Art reflects, the synthesis, of a time structure, as memory. And Even with a still rudimentar tool, and the simplicity of shape, the Egyptian artist endeavoured to show a unique essence in beauty. On the Philosophy field, the simplicity can be explained as follows:

The more simple and the more essencial is the shoe, the more sober and the more purely the fountain raises on its essence, the more the whole being becomes itself faster and plainly with it all. In this way, the being that is hidden clears. The cleared on this nature is the beauty. The beauty is the way of truth while the unhidden comes. The clear that has this nature shows its magnificence on the work. The magnificence shown on the work is the beauty. (HEIDEGGER, 2008, p.44, 45)

For the Philosopher, the beauty is the exhibition of an inner content and not purely the reality aspect; Nothing is spoken, on a work of Art, since its character is silent, it’s implicit on the colors and on the shapes disposed. That’s when the beauty outcrops. There still were not discussions about the beauty in the Ancient Egypt, but the artist of this period, strived to leave, the essence apparent, on his work, through a representation of simple shapes and slim people. His hands left clearly the sensuality, the delicate and slow gestures and, even dying unknown, his Art was carried, centuries forward.

A special thanks to The Metropolitan Museum of Art, museum founded on 13 April 1870 in New York, whose mission “is to collect, preserve, study, exhibit, and stimulate appreciation for, and advance knowledge of works of art that collectively represent the broadest spectrum of human achievement at the highest level of quality, all in the service of the public and in accordance with the highest professional standards”. – Museum Mission Statement.

See also the History of the Museum The Metropolitan Museum of Art.

The Egyptian Art by Rosângela Vig
You can also listen to this article in the voice of own Plastic Artist Rosângela Vig: Painting is the glamorous shock of different worlds designated to create, in and for battle, the new world called work of Art. Each work is born from the technical point of view exactly as the cosmos is. And from the chaotic, rustle of the instruments, they create a symphony called the music of the sphere. A criação de uma obra é a criação do&hellip;