A exhibitionthe “Future Now – Revisiting Architecture in Tmiss”, in praça Mauto, brings a new look at raw materialstorivers used in construction, the meaning for sustainability and the solutionsit tistechnical and architectural in contemporary projectsâneos. From 8 September to 17 October, with free admission

A sustainable reforestation wood pavilion formed by 24 photographic and typographic panels, in the middle of Praça Mauá, will receive, from 8 September to 17 October, the exhibition future now – Revisiting Architecture in Tmiss, contributing with new ways of thinking and understanding the challenges of contemporary architecture, with urgent issues. A shows provides an architectural experience combining the knowledge of the latest in high technology with one of the first materials used in construction, the Earth (like clay and clay), and its contemporary applications. The open-air event, with free admission, is the official Swiss exhibition at the 27th World Congress of Architects UIA2021RIO. divided into two pillars: free exhibition and webinars, addressing topics such as technological innovation, digital fabrication, culture and history of Pisis (clay construction technique,called mud in Brazil)and sustainability of the materials used. “future now”is performed by Insight Architecture,Swiss company that values ​​architecture through architectural travels, events and design focused on Brazil, in partnership with architects Diego Baloian, of Chile, and Pedro Rivera, of Brazil and with the collaboration of the Swiss Federal Institute of Technology of Zurich ETH.

The exhibition pavilion, on Praça Mauá, was designed by Chilean architect Diego Baloian, (in partnership with Sebastián Silva, Matías Baeza and Juan Pablo Peró), with the collaboration of ITA, Brazilian construction company specializing in sustainable wood from reforestation. The exhibition is curated by Insight Architecture, with content in partnership with ETH Zurich and architects Fabio Gramazio and Matthias Kohler, by Gramazio Kohler Research, e Roger Boltshauser, do Studio Boltshauser. It also has the support of Pro Helvetia and the Swiss General Consulate in Rio de Janeiro.

The aim of the project is to present new perspectives for the future through a more sustainable architecture, to start a new chapter in the history of contemporary architecture, with the use of the land, an entirely renewable and carbon neutral material that, unlike cement, does not need to be burned during the refinement process., using a digital fabrication method that expands the possibilities for the practice of architecture and construction. "It's the union of low-technology, the millenary clay, with o high-tech, combined with the most innovative robotics, ensuring precision in construction and creating other horizons for architecture. We want to suggest new paths", says exhibition creator Jason Baumann, da Insight Architecture. The pavilion will house panels with illustrations of the works Kiln Tower – Oven Tower and Robotic Clay Rotunda in addition to a brief history of the use of clay in architecture. There will also be a QR Code with several videos about the works, plus additional informational texts.

“The circular geometry of the pavilion, which proposes a modular and prefabricated construction system based on wooden parts, interacts with the public through a free access ramp and an interior space capable of adapting to multiple forms of appropriation by the citizen", says architect Diego Baloian.

Kiln Tower” – Oven Tower is the latest project by Studio Boltshauserda ETH Zurich. a 9m tower, built using the pisé clay technique, a technique for compacting raw clay into shapes, pestle-like. Designed to be an exhibition space and at the same time an oven for burning clay, on the grounds of the Cham Brickworks Museum, in Switzerland. Another work displayed on the exhibition panels is the Robotic Clay Rotunda, by Gramazio Kohler Research,also from ETH Zurich. The architectural scale structure was built with a robotic construction method, using less material and generating less carbon emissions, reducing impact to nature. The process adds clay cylinders, the so-called soft bricks by pressing, that enable the production of geometrically complex structures.

“The fact that it's in Praça Mauá is super cool, a public space frequented by all kinds of people. Exposure can awaken desires in people, knowledge, wills, curiosity. That's the most important", comments the architect Pedro Rivera. 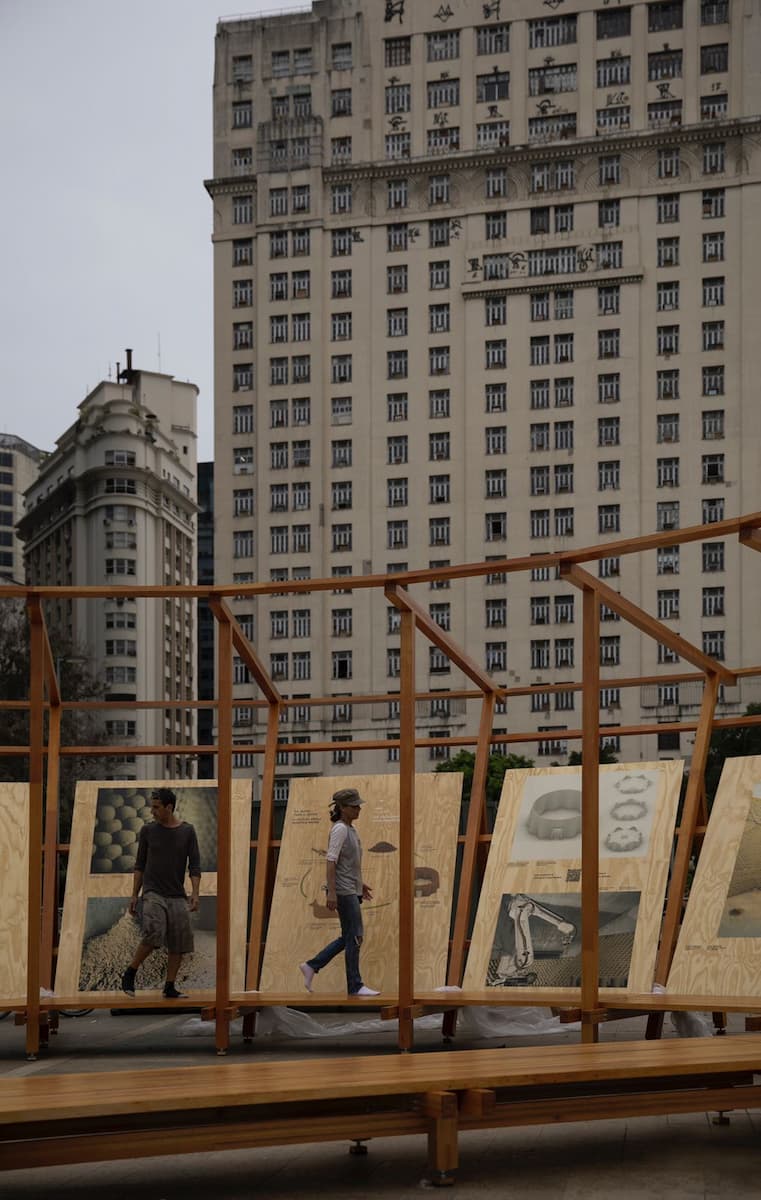 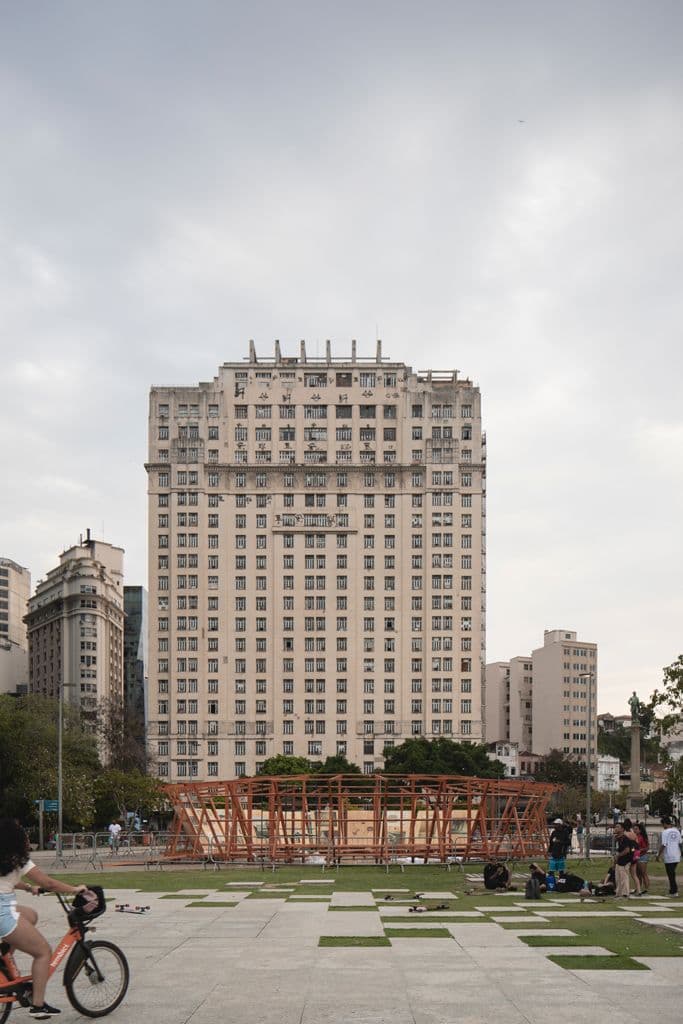 “Future Now” aims to achieve, not only the public specialized in architecture, but also to everyone who proposes to learn about new ways of building more sustainable. Be aware of the potential of raw clay, one of the oldest building materials known, available in bulk worldwide, and fully reusable and carbon neutral, is of global interest. Throughout history, technological development has gradually reduced the use of clay with the introduction of burnt limestone, used to produce cement, the mandatory ingredient to produce reinforced concrete. The massive use of concrete as a very versatile and supposedly eternal material, was made possible by the almost infinite availability of cheap energy based on coal and oil, throughout the 20th century, but which has already proven harmful to the environment.

Today, around 30% of residential buildings around the world are built with earth or clay.. Almost 100 of more than 500 monuments in the list of 2004 UNESCO World Heritage sites were built partially or completely with clay.. Some well-known examples are the Great Wall of China, the clay “skyscrapers” in Shibam and the Alhambra in Grenada.

To make this project possible, Studio Boltshauser and Gramazio Kohler Research professors from the Swiss Federal Institute of Technology in Zurich ETH have been investigating the potential of clay constructions through two prototype projects that were developed in conjunction with students and young researchers. Even if advanced structural engineering, computer design and robotic fabrication make these architectural investigations possible., its full potential will only be possible when and if there is a change in society's traditional value system.

"We must recognize that nothing is for eternity and that the construction environment needs constant maintenance and transformation. This simple discovery makes it imperative to build with zero waste and carbon neutral materials to seek a radically contemporary architectural expression, it is necessary to write a new chapter on the rich history of clay constructions, which is radically projected into the future. And the future is now", explica Fabio Gramazio, from ETH Zurich.

As part of the exhibition and parallel to the UIA congress 2021 River, Insight Architecture also produces, in collaboration with Swissnex Brazil, a series of four webinars on technological developments and the impact on contemporary architecture, with free live streaming through the link insight-architecture.com/future-now-webinars-events. Fabio Gramazio will participate, Fabian Scheurer, Roger boltshauser (Switzerland), Martin Rauch (Áustria), Benjamin Dillenburger (Holland), Josep Ferrando (Spain), Fernando Minto, Marcos Acayaba and Marcelo Aflalo (Brasil), The events will be held in Portuguese and English, with simultaneous translation into both languages. Below is the schedule:

Previous: Exhibition Mata FOR SALE – Alice Shintani – opening 18 on Sep
Next: Course on Accountability for Cultural and Social Projects