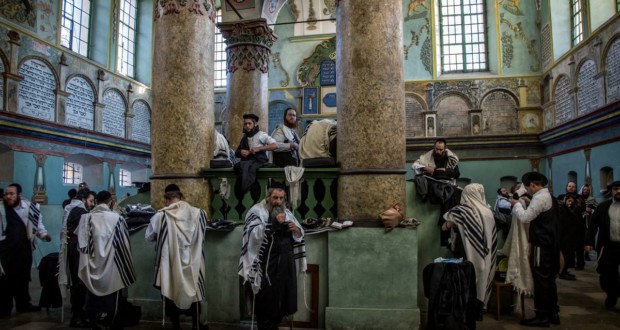 The show, presented last January at UN Headquarters, in New York within the International Day celebrations of Holocaust Remembrance, will not Jewish Immigration and Holocaust Memorial from 17 of October.

In the opening event, exclusive to guests and media - in 16 of October, to 19 hours -, Agnieszka Traczewska will be present and will deliver a lecture on the work.

“Exposure greatness 'malt, A BLESSING’ lies in being able to portray chassidim pilgrimage to the tombs of tzadikim, feeding the hope that this important part of Orthodox Judaism are not consumed in the ashes of the Holocaust, and flutters today in both the US and Israel”, comments Reuven Faingold, pedagogical coordinator Jewish Immigration and Holocaust Memorial.

In them, Polish photographer documents the lives of Hasidic Jews, presenting their descendants returns to Jewish heritage sites in Poland.

Are revealing images of the remains of the ancient world did not disappear completely, and that Jewish heritage is still alive in Poland.

The artist was well received in the world of Hasidic Judaism, community often inaccessible to outsiders. This unique access and historical produced an intimate portrait of people who experience the mystery of faith, depicting the life and return home after the devastating consequences of World War II.

The Hasidic Judaism in Poland lasted until century 20, and it has since restored in Israel, in the United States and Western Europe. In recent years, the Hasidic community began to return to Poland to revisit its heritage and history. Exposure Agnieszka Traczewska It presents the Hasidic pilgrimages to the tombs of tzadikim birthdays of his death, a tradition which holds that miraculous events occur during these occasions.

Second Agnes, “the continuity of Jewish life in Poland and the strong ties with the tradition of ancestors have been for me really a personal discovery enlightening”.

ECSTASY MYSTIC - The Hasidism is an exceptional phenomenon. One of the few religious movements to combine mystical ecstasy and pasta. It's also, worldwide, the most important religious phenomenon has created in Poland.

From the late eighteenth century to the early nineteenth, Hasidism formed the Jewish religion in Eastern Europe. Despite the Holocaust have represented their order in the original environment, new movement centers were established in Israel, in the United States and Western Europe.

Today the chassidim, linked to the tradition of their spiritual leaders, They return to their graves in Poland, in Romania, Ukraine and Hungary.

Travel to visit a tzadik It was a religious experience in itself and an integral part of the Hasidic movement since its inception. A tzadik offered advice on religious issues and nature, also, worldly. People believed that this would accelerate the intercession prayers and would allow them to directly reach the Divine.

Reverence to tzadikim continued after his death and people could travel to their graves for another visit. The custom of visiting the tomb and pray before it originated from the Jewish tradition which claimed that the soul of the dead visited the site of his funeral on the anniversary of death (yorzeit) or funeral. The chassidim believe that the soul of tzadik listens to the prayers of those who are gathered in his grave. Pieces of paper (flowered) listing requests are left in the tomb tzadik or in its proximity. Legend has it that miracles occur through the prayers made at the grave of a righteous. The trip to the tomb of a tzadik It is a journey in search of a blessing.

TERRITORY SECRET – Agnieszka Traczewska, Polish, 50 years, It is documentary producer and photographer. Since 2006 came with your camera the chassidim coming from all parts of the world to the old tombs of tzadikim - spiritual leaders.

In addition, the photographer enters the hermetic circles of Jewish Orthodoxy in Israel and the United States, portraying the secret territory, almost always hidden from others eyes, of everyday life and ceremonies of those who “devoted his life to Torah”.

Its strong Polish background creates the search for a phenomenon “lost World”. It follows the story of the Jews, centuries forward, lived side by side with the Poles and the tragic end of the next national relationship that came with the Second World War.

The fact of her being a woman and not a Jew requires acceptance and flexibility of their unorthodox features, which gives a hint to its persistent pursuit.

Previous: Former participant of the House of Secrets José Miguel Fernandes conversation with Abreu Fabiano on the fear of failure
Next: Workshop oriented development projects for public notices of the Municipal Culture Fund