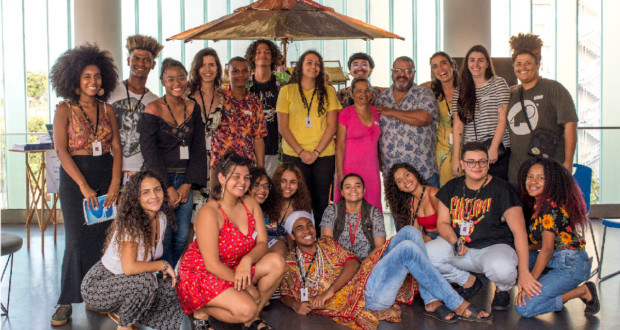 Between the days 28 January and 1st February, visitors to Rio Art Museum - SEA may participate in the free programming CORPO_NÓS. developed by 15 young people from North and East and the Baixada Fluminense, The activities, as offices, Circles of conversation, interviews and performances, They will be held in the museum spaces and squares of the port area, with vacancies filled in order of arrival and subject to the capacity indicated. The full schedule is available on the website www.museudeartedorio.org.br.

The project is the result of the course "Formative Courses", which included financial support from BNDES and offered to scholarship students during the five months of classes and workshops - in order to attract artists and young people who are normally not represented in cultural institutions.

"The students were able to experiment and experience the different areas that the museum space includes, through classes with teams of various sectors SEA. This pilot project promoted training, cultural and artistic Introductory for those interested in joining the production chain of museums or act generally in the fields of art and culture ", Jezebel explains Pucu, Museum Education Coordinator.

Shares dialogue with two exhibitions currently on display in the SEA, "Street!"And" UóHol ", and have as central a mobile device called mediation Space Shell. Developed especially for the project by architects Studio Floor, the articulated object consists of small cars attached to a tricycle that, once parked and opened, It serves as a support for carrying out activities. The idea is to create experiences where the public actively participate, focusing on events such as the kite culture, do rap e do funk, urban graphic arts, among others.

The activities proposed by the project put into debate also key issues for the development of museums today, such as representation of blacks and peripheral bodies and gender performativity, among others, from the research of new epistemologies and pedagogies, having the art as decolonization instrument knowledge, practices and looks.

>> 17h – 19h – opening CORPO_NÓS – Occupation of Cultural Routes Formative MAR | auditorium MAR
official opening schedule, with the presence of representatives of the SEA, BNDES, the coordinators and participants of the project Pathways Formative.

>> 10h – 20h - Course: "Unconformities: gender performativity and art scene in drag "
The course will focus on discussing the issues involving the construction of bodies and identities from the perspective as drag figure of performance and concerns expression of binary standards bodies. Through conversation tables and performances, deepen the crossings and experiences of artists and trans people about gender identity and expression of their bodies.

*75 vacancies – Distribution of passwords from 9.30 am at the reception SEA.

Workshop: "Where have kite, It has sky " – With his Jose Tide
The workshop invites the public to fabricate pipes and portraying their dreams and wishes them future. Giving the line kites, we enable dreams Earn sky. Participation of children in cultural Canvas Tide.

Workshop: "Where have kite, It has sky "
The workshop invites the public to fabricate pipes and portraying their dreams and wishes them future. Giving the line kites, we enable dreams Earn sky. Children's participation Marvin Project and Roda Transcultural.

15h30 – 17h – Manifesta Office
As our bodies can collectively manifest something that we represent? The proposal invites the public, inspired and driven by conversation circle, thinking and co-create democratically a track that expresses the desires and urgent guidelines for the development of cultural Rio scene.

17h – 20h – end class-show CORPO_NÓS with Orchestra Shed and Cultural Block Agbara Dudu and Dj Wallabê
Celebration time and project closure routes Formative. The Shed is an orchestra linked to a school of the same name music, who was born in a Candomblé yard in São Bento, in Duque de Caxias. His musicality influences of Afro-Brazilian culture and spoken poetry, Group brands as well as experimentation. At the time the Shed will present a show with music and poetry of his repertoire, with the participation of DJ Wallabê. The name Agbara Dudu means in Yoruba "Black Power". Considered the first african block of Rio de Janeiro, It was founded in 1982 in Oswaldo Cruz, maintainer with the characteristic traditions, task in which they engage their members even outside the Carnival period. On this day, the block will pull a class-show that will engage and excite public.