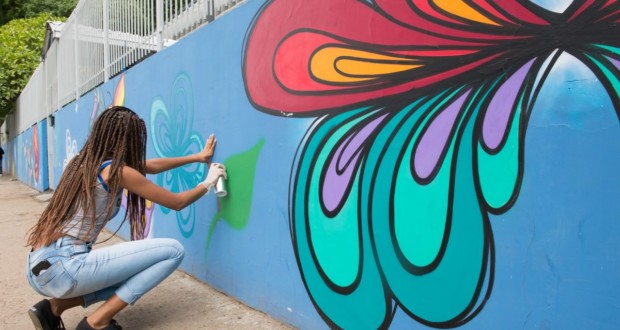 Shows "Digital Grafitarte" occupy the Carioca Design Center with panels created by Juliana boil and Smael Vagner, and invite the visitor to create their own art interactive screen

The street art is taking over Rio de Janeiro and leaving the city more and more colorful. Now, graffiti will win the walls of the Carioca Design Center, in Tiradentes Square, at the Center, with the show "Digital Grafitarte" which opens to the public on 13 of June. The display will comprise two large panels, Painted by artists Juliana boil and Smael Vagner, as well as an interactive installation in which visitors can create their own art, print and take souvenir. The initiative goes against the social show, which promoted graffiti workshops, for free, in two public schools, ending with the transformation of the walls of the institutions carried out by the students themselves. Sponsored by Uber, the project's theme is women's entrepreneurship.

The artist Juliana boil was seeking in nature the inspiration to create the panel, with about of 25 m ². Member of the collective Ghetto Run Crew, the artist will paint hybrids of women and butterflies to represent the power of female transformation. "The woman is a being strong, you need to create wings to break free. As the process of metamorphosis, is a path we must go alone ", believes the artist.

Already Smael Vagner will use his passion for dance and portraying female bodies from the ballet. "I have great admiration for the great dancers of Brazil. Many women are the leaders of their companies and are able to manage people in a unique way. That's what inspired me to create my art within the female entrepreneurship theme ", account Smael.

The project "Digital Grafitarte" – approved by the municipal Department of Culture of Rio de Janeiro and sponsored by UBER through the Municipal Law of Cultural Incentive – also we had a social arm and promoted graffiti workshops in two public schools in Rio de Janeiro. While Juliana boil held meetings at the State College Leopoldina da Silveira, Bangu, the artist Smael Vagner developed classes at the Municipal School Bahia, in Complexo da Maré. There were eight weeks with 12 meetings in each institution, with groups formed by about 40 students, attending theoretical and practical classes. At the end of the course, groups are transforming the school walls in beautiful graphite panels.

"For us at Sagre Consulting, It is gratifying to participate in an initiative like this. We were very happy to join Uber more a social transformation project, with the ability to impact the lives of so many people ", says Marco Antonio Junqueira, Managing Director of the company.

As for Cristina Figueiredo, director of Korporativa, company responsible for the ideation and execution of the project, the show deals with graffiti as urban developments language. " 'Digital Grafitarte' is a socio cultural project of urban intervention consisting of the artistic interaction of project participants in public spaces and street furniture. A complete shows, Creative, educational and irreverent, coming dialogue with the most modern techniques of 'making art'. The novelty of this show is through the digital support, where all participants will be protagonists of the exhibition ", ends.