The Art of the Middle Ages – PART II – Eastern Rome

There could not be a better and more beautiful way to draw the moment of inspiration. Connected to spirituality and influenced by Middle Ages, Kandinsky (1866 – 1944) knew how to describe the soul of artist at his most intense moment. From the moment of delight, to the moment of deep thinking; the artist is anxious to show his judgement over things, and to make his idea come true, then he acts over the color and over the shape, bewitched and overjoyed by his early thought. His hands work passionately on the object and he speaks to the viewer through his Work. This must have been the same to the artist of the Middle Ages, and this is clear in the Byzantine Art, for all, its sophistication and uniqueness. 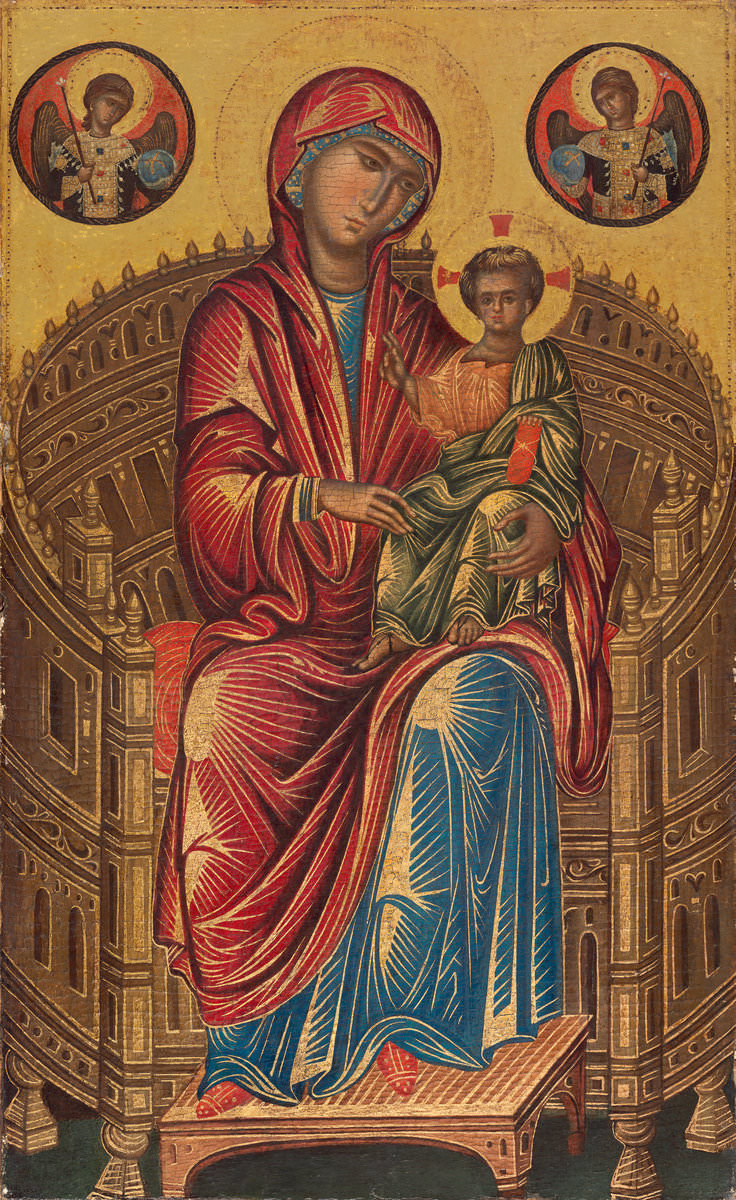 Its History take us to the 4th century when, the crisis in the Western, made the roman emperor Constantine transfer the capital city to the Eastern Rome, to the city of Byzantium, called Constantinople later, currently known as Istanbul. The collapse of Western Rome ended up in its fall in 476, fact that defined the early of Middle Ages. Despite the crisis in the Western, life prospered in the Eastern Rome, in the city of Byzantium, until it was invaded by the Ottoman Empire, one of the events that ended with the longest period of History.

The Byzantine Art dawned when the Eastern Rome was rising, and it influenced the Western Art, Its height was at the age of Justinian, during the years 526 and 565. After this period, because of the iconoclastic crisis 1 images were destroyed, due to conflicts between the clergy and the emperors. It was possible to keep the images, in the Western Rome, as sacred memories, On the other hand, this subject caused a disagreement in the Eastern Rome, since it recalled the pagan worship, what was conemned by the Bible. But Pope Gregory the Great (540-604) acted favourably to the Art as he declared that “the painting can do to the illiterate what the Writing can do to the literate” (GOMBRICH, 1988, p.95). The images would serve as an illustrated book to the devotees who ignore the Writing and the Reading, and they would serve as an educational purpose. Based on, the narrative style of Roman Art, the artists would show the essential, in order for the comprehension to be simple. But the iconoclasts took advantage and the images were forbidden in the Eastern Rome, in the year 745, unlike the Pope’s saying. On the other hand, were those who believed that the images were sacred and they represented the supernatural world. This thought was favorable to the Byzantine Art which started a new golden period. The idea was an Art for the Chuch, that should follow now a strict representation and traditional patterns.

This rigidity, certainly, lead the artists to use former models, which made it possible to preserve the practices of Greek Art. From the Eastern, from regions such as Syria and Asia Minor, inherited the luxury, the refinement and the exuberance. In figure 1 can be observed in the foreground, the strict patterns can be seen on the frontality, the verticality and the religious theme. The way that the clothes fall over the bodies and how they are folded on the arms and legs of Mary and Jesus, as well as the drawing of the hands, their faces; and especially the symetry and the shadow, resemble the Greek and Hellenistic paintings. From the Eastern, the richness of the details, the technique and the use of color cam be infered. It is clear that the demand of shape, would not prevent the arrtists from practicing their creativity. Through their hands, the Byzantine Art distinguished as an incomparable style of beauty, sophistication and above all a spiritual sense. 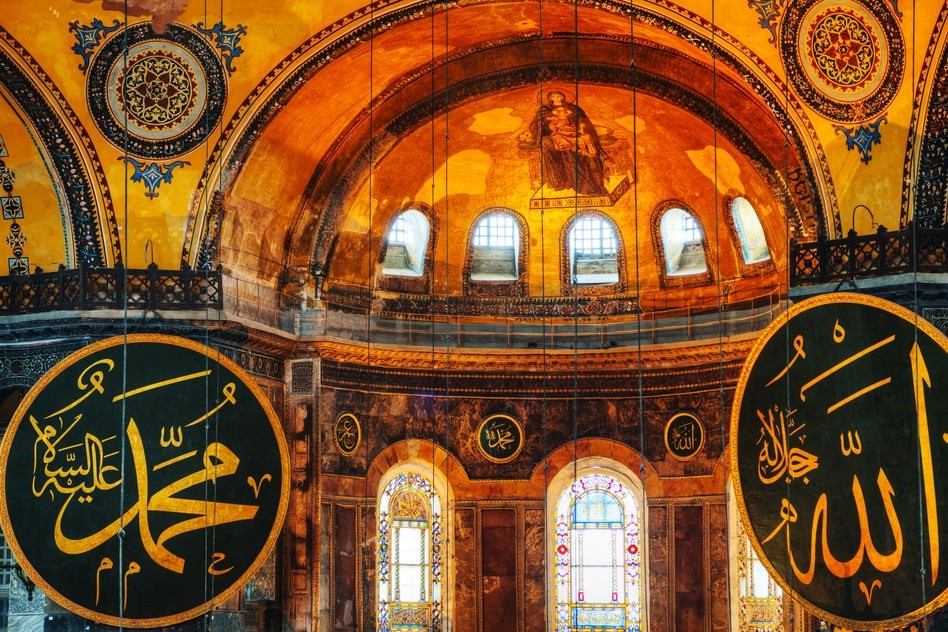 The best examples of the Byzantine Architecture are the churches, among them, the Hagia Sophia Basilica 2, from the 4th century, in Istanbul, that served as inspiration for other churches of the Western, such as St. Apollinaire and St.Vitale, in Ravenna; Santa Maria Maggiore, in Rome; and St. Mark in Venice. The Hagia Sophia (Fig. 2) joins the Roman work and the Eastern mysticism. Its rectangular plant has the same size of three soccer fields, Its greatness would help support the followers of the, new religion then. The central dome and the support system with arches and piers are impressive. There are, in the base of the dome, Forty windows, that allow the light to come in and lead to a sensation of lightness inside. The mosaics and the paintings inside, with the educational purposes for the followers, enriched the place, with a unique beauty. Since its building, in 360, until the end of the Middle Ages, the Basilica was used by the Byzantine Orthodox Church. Between 1204 and 1261, it belonged to Catholic Latin religious. At the end of the Middle Ages, it became a Muslim mosque and after 1935, it was turned into a museum. 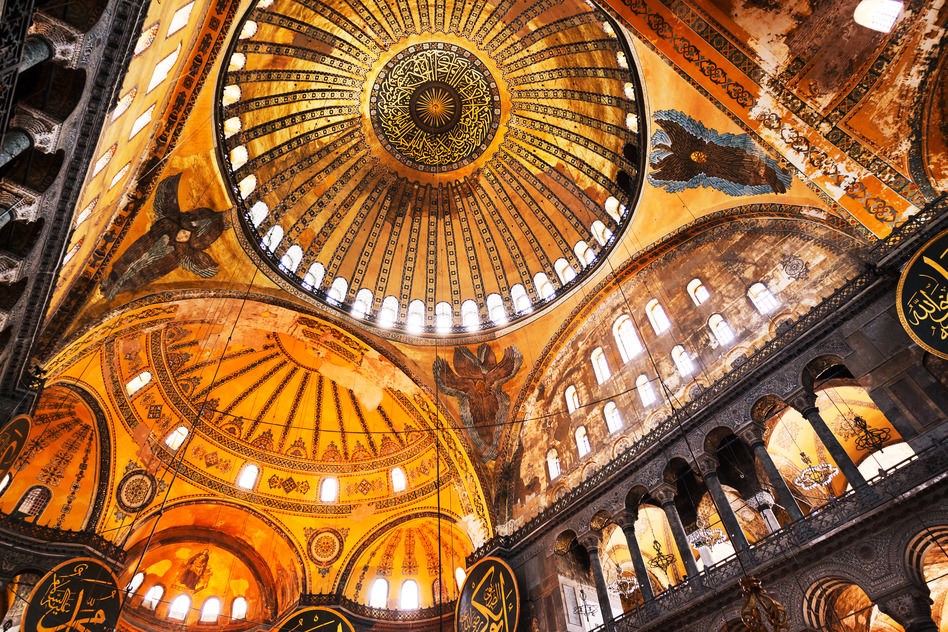 Beside the churches, the mosaic is another important example of the Byzantine Art, mainly in the period of Justinian. This Art served to decorate the churches, and to teach the followers, depicting the life of Christ, of the prophets and of the emperors, who were considered representatives of God on Earth. There was an excessive use of golden color and the patterns that ruled the painting, ruled also the mosaics. People were represented from the front, and vertical position, with a solemn expression, to reinforce the religious idea, without worrying abrout perspective, volume and depth. The Pantocrator Christ (Fig. 3), model followed both in mosaics as in Byzantine paintings, it presented Jesus with the right hand raised as a gesture of blessing, the left hand would hold a book that represented the Gospels and the face had the expression of rigor. This standard still remains nowadays as a model for the Orthodox Christian Church. 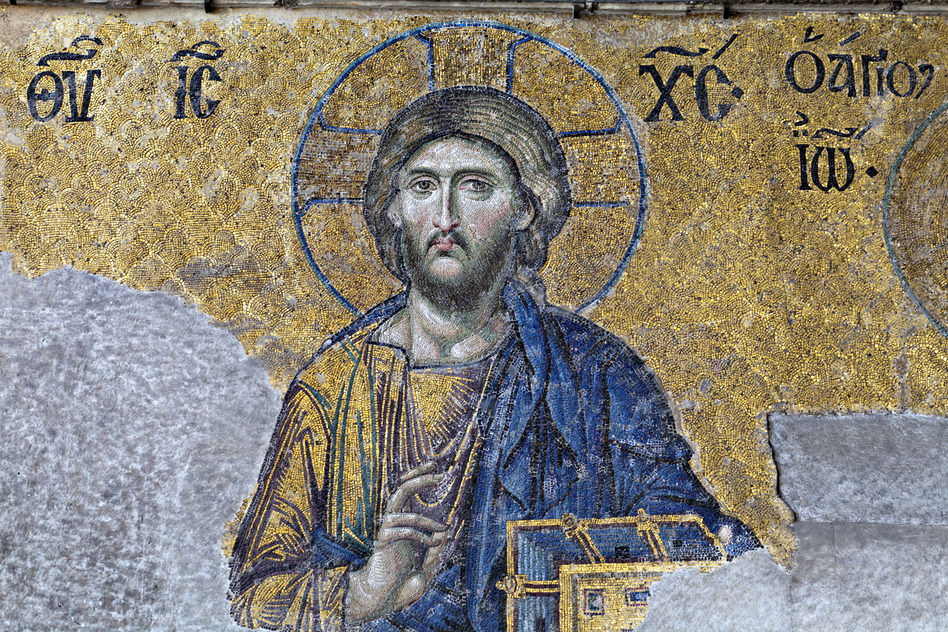 Much of the Byzantine Sculpture was destroyed, by the emperor’s edict, due to the iconoclastic crisis, and only huge sculptures or small ones were left, the small ones are the diptyches and the triptyches, the portable carved panels, of ivory, with embossed designs. As happened in the painting, one sees the influence of the Eastern, the rich details and the technique; and from Greek Art, pleats and trim the fabric on the body. On the other hand, there are a few details on the faces of the people and a certain formality. The eyes are big, and they look upwards, to remind the religious thought and the ascension to God.

The Byzantine Art showed an evolution over the years until the end of the Middle Ages, when the humanbeing tturned to be represented with more details and more natural gestures. This Art prospered, even after the fall of Constantinople, in 1453, in places where the Orthodox Church predominated. There can be seen icons and images that remind the Byzantine Art, for example, in the church of the Saviour on Spilled Blood (Fig. 4), also known as the Church of the Resurrection, in the city of St.Petersburg, in Russia, built between 1883 and 1907. The strict pattern may have even emphasized the creativity of the Byzantine Artists. Their Works, are in evidence the Beauty and the Sublime. According to Kant (1942, p.11), “the intelligence is sublime; the resourcefulness is beautiful (…); the audacity is great and sublime”. The Beauty is evident, in the drawings, the colors, the rich details and the technique. The artists engendered a rich legacy to the humankind that corresponds to the Sublime in Art, with all the majesty of their Architecture and their boldness in challenging the patterns. 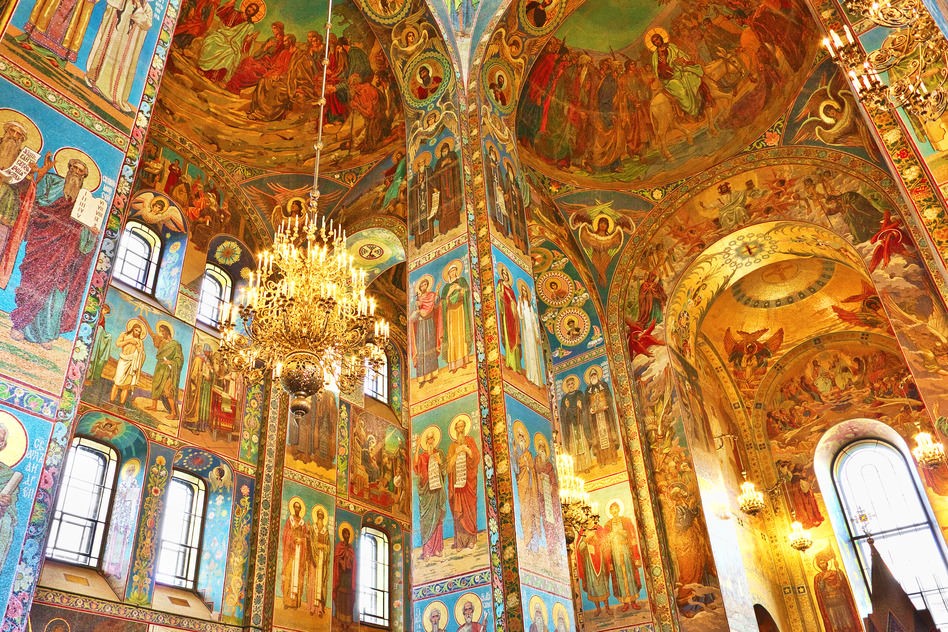 1 Iconoclast – original word from Greek; means to be adpt of the iconoclasm; it refers to the person that destroys images or religious symbols, for being against the idolatry.

More details on the official website of the Basilica
www.ayasofyamuzesi.gov.tr/en/photo-gallery

Previous: Exhibition of Plastic Arts and Poetry and Book Launch “Angels and Archangels”, Curator Carlos Zemek
Next: Interviews with Artists of the Iª Mostra Itapetininga de Arte on TV Itape by Edmundo Cavalcanti